This year 15 May fell fortunately on a Friday, forcing a 3-day holiday. The 15th of May is always a city holiday so banks, schools, and many establishments are closed in the city of Madrid.

I woke up pretty late, around 9:30am, showered, had a light breakfast, dressed, and ambled the half-kilometer to the Pradera de San Isidro, the park alongside the Ermita de San Isidro El Labrador – or more simply put, La Ermita del Santo, located just across the river from the Vicente Calderon football stadium and home to the Atletico de Madrid football team. 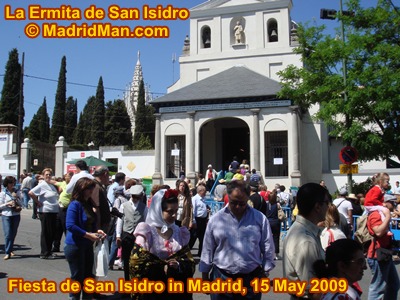 Thank goodness it was a cool-ish, sunny morning so my jeans and short-sleeved shirt and sandals getup wasn’t too hot. I made my way uphill at about noon, passing the throngs of long-line-pedestrians waiting their turn to step up to the San Isidro fountain to sip from a glass or fill their jugs with the cool spring water – which apparently has “healing powers”. The water’s good, there’s no doubt, but this year the line STARTED at the bridge which crosses the Rio Manzares and I wasn’t about to spend the 1.5+ hours. I’d taken a sip last year and the healing powers seem to have kept me in good shape since then. Still, I was happy to reach the Pradera de San Isidro early-ish in the day before the great masses arrived.

As I made my way up the hill (it’s ALLLLLL uphill, by the way, no flat parts whatsoever, except for a 30 meter stretch in front of which the mass is always held) I passed another, somewhat shorter line. This line was to ENTER the Ermita del Santo. I went in a couple years ago so, again, I wasn’t going to the spend time as I didn’t have all day to kill, just about an hour before meeting friends for a terraza lunch in the Casa de Campo next to the lake.

After passing all the “rosquilla” (las tontas y las listas, like hard-fried doughnuts) stands on the left and the paramedics and community group stands on the right, I had to wind around the backside of the catholic mass which was being given to the seated masses in the street. There must’ve been 10,000 people there, all seated and listening intently, most of the men left their chulapo hats on for protection from the sun, as did the women with their scarved-and-carnationed heads. A number of women also fanned themselves even though it was not cold – but as their costumes may have been heavy and the sun direct on the backs of their heads, I couldn’t blame them. 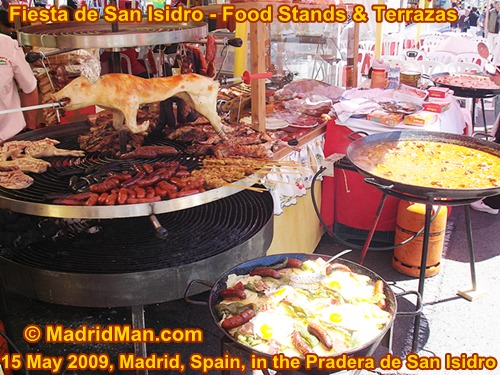 Passing the mass(es), I continued uphill seeing a few State-Fair-like game stands, but then it was just one terraza after another, covered and uncovered, bar after bar, all displaying piles of these incredible Spanish dishes like croquetas, calamares, salmonetes, fried potatoes, chopitos, and one humongous paella pan after another, all with freshly garnished shellfish and lemon wedges. There was even one Kebap stand – which didn’t have anyone waiting at it at the time of my passing. Since it was still relatively early, there weren’t many eaters but I could imagine how full those terrazas would be the minute the mass was concluded at around 1pm or so.

On my way up the hill, and subsequently on my way back down the hill, I passed one cutie-pie girl after another, tiny things, maybe 5-8 years old, dressed up by their mothers as “chulapas” (traditional Madrid dress) with tiny red polka dots, oftentimes a white shawl around her shoulders, and always a white scarf covering her heads, topped off with a single red carnation. They were adorable, you just wanted to give them a big hug. The little boys, dressed alternatively as “chulapos“, were cute too but not as cute with their black pants and black shoes, white button-down shirts, and a hounds tooth, button front vest, topped off with their gray hats.

Returning to the bottom portion of the road passing through the Pradera de San Isidro, I stopped off near the Ermita de San Isidro to buy some delicious Rosquillas: Las Tontas y Las Listas. Rosquillas are like a harder fried-dough version of a doughnut, topped with a variety of icings. They’re great with coffee for breakfast or merienda. I only bought a dozen. But since rosquillas are only sold around the San Isidro holiday, by the time the last rosquilla is eaten is when we realize we have to wait until next year before we can buy more. 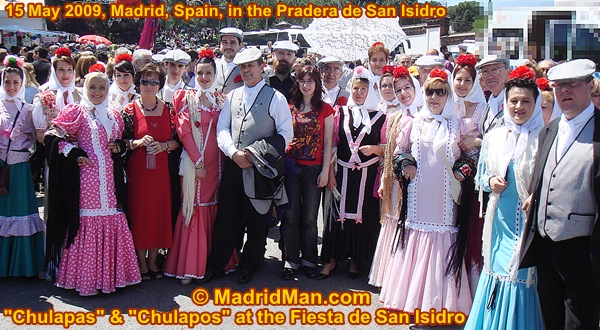 With the two-handle plastic bag containing rosquillas now wrapped around my wrist, I turned around to see a group of 20 older Chulapos y Chulapas dancing El Chotis, perfectly choreographed to recorded music, and a large group surrounding them, everyone taking photos and video – including me (see below!). These dancers belong to “Peñas” or associations, each having its own banner/flag to represent them.
They practice every year to perform for the Fiestas de San Isidro and, I suppose, whomever else will have them. They don’t get paid, I’m sure, but do it for the love of the dance, the love of their city and its history. Sadly, however, the members of these associations are always older. Rarely does a young person join the ranks as “it’s for old folks” and, I’m sure, “it isn’t cool”. So I have to wonder WHO will be dancing El Chotis on San Isidro in 25 years time when ALL these people have passed away. “That’s progress”??

So I’m officially done with the San Isidro Holiday although events take place throughout the weekend in various locations around Madrid, including the Pradera de San Isidro. Tonight and tomorrow night, from my window, I’ll hear loud rock concerts until late. And then, on Sunday evening, marking the end of the San Isidro Holiday, there will be an incredible fireworks display in the Pradera.. And from my rooftop I’ll have the best view in the area, being only a half a kilometer away. Can’t wait for that.