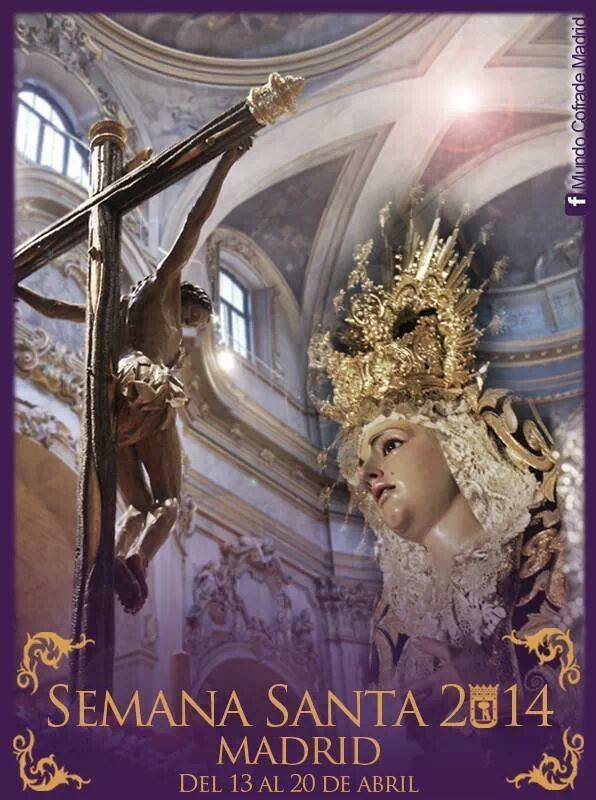 The majority of onlookers of the seemingly countless Holy Week Processions in Madrid are people of faith, but many attend for the spectacle of slow-moving, flower-and-candle-covered, band-following floats of religious symbols like the Virgin Mary (of which there are countless) and Jesus Christ (sometimes on the Cross and other times laying down). Still others go just because everyone else is going. And finally, others refuse to attend on anti-religious grounds. To each his own, I say. Live and let live.

Holy Week, or “Semana Santa“, in Spain begins on Palm Sunday, “Domingo de Ramos“, and ends on Easter Sunday, “Domingo de Resurrección“. In between is important for many Spaniards for religious processions, Catholic mass, and opportunity to travel with family and friends. Most Spanish adults only have Good Thursday, “Jueves Santo“, and Good Friday, “Viernes Santo“, free which, added to the following weekend, only gives them a 4-day holiday. Teachers and children have the entire week off.

Many Catholic Spaniards, while not necessarily “practicing, will attend both Palm Sunday and Easter Sunday but maybe not mass throughout the rest of the year. It may be more for tradition than religious reasons.

Palm Sunday is interesting as you see elaborately woven, and sometimes amazingly long, palm leaves into amazing shapes. Many you see being carried through the streets and others you see proudly displayed in residents’ balconies to show their faith and/or to show-off their palms.

This year there will be no less than 13 processions in Madrid and each is represented by one particular Madrid church. The individual processions leave from and return to the same church after winding through the streets for all the public to see and appreciate. In 2013 I was an official photographer for the Santa Cruz Church (next to the Plaza Mayor) and had total access inside the church and along the procession route of the “María Santísima de los Siete Dolores“. That was quite an experience.

The first Semana Santa procession of 2014 in Madrid will take place on Sunday’s “Domingo de Ramos” from the San Miguel Church, passing through the Plaza de Oriente. The next one is on Wednesday from the “Parroquia Nuestra Señora del Carmen y San Luis” and passing through the Puerta del Sol.

On Good Thursday there are no less than 3 processions. Of these, arguably, the biggest and most important one is that of “La Macarena” which passes through the Plaza de la Villa.

Good Friday is the busiest day of Holy Week in Madrid with a total of 6 processions, nearly all of which start at 7pm or 7:30pm, and 3 of which pass through the Plaza Mayor. And unless you stay in the Plaza Mayor itself, seeing – AND FINDING – more than one procession on this evening can be challenging. These processions move so slowly it can be difficult to know where they might be at a given time. Most people follow one particular church and arrive long in advance at a certain point along their procession’s path in order to secure the best vantage-point possible.

Saturday hosts the last 2 processions of Holy Week. Oddly enough – to me, there are never any processions on Easter Sunday itself, only a “Tamborrada“, or drum session, in the Plaza Mayor at noon. I’ve never attended one of these so I hope this year will be the first.

Persons you don’t normally see during processions are those hidden underneath each float – or “paso“. These 28-or-so “costaleros“, the guys carrying these several-thousand-pound floats on their shoulders for hours upon hours, taking only short breaks when directed by the float’s leader. I’ve seen many-a-costalero literally shedding tears and sweat in pain – or in faith – at the moment of lifting these heavy floats.

If you attend the processions, wear your most comfortable shoes and take a jacket as these springtime evenings get cool once the sun goes behind the buildings. Take a route map of the processions you plan to witness. And finally, be sure to take a good deal of patience as you wait for the processions to arrive, pass, and then swim your way through the crowds to leave or move on to the next one.