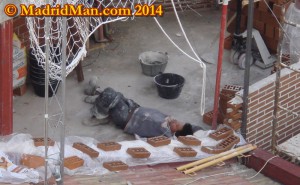 Go ahead. Admit it. You wish you could take a long, refreshing nap in the middle of your workday, right? Sure you would. Who wouldn’t? The fact is, most Spaniards would LOVE to have a long nap after lunch, too.

But wait a minute. Didn’t Spain invent the siesta? Don’t all Spaniards take midday naps? Is that maybe why their country is on the verge of a total economic collapse? There are lots of myths floating around about the infamous Spanish Siesta. Instead of the word “myth”, maybe a better word would be “misconception”.

Dictionary definition for the word “Siesta“: “a midday or afternoon rest or nap, especially taken in Spain and Latin America.”

Even the dictionaries are perpetuating the misconception that all Spaniards and Latinos take midday naps. Where did siestas come from and what is it really?

WikiPedia describes “naps” as the following, “…Other cultures (especially those in hot climates) serve their largest meals at midday, with allowance for a nap period (siesta) afterwards before returning to work.” The WikiPedia description is more descriptive and more accurate.

When you were a kid, didn’t your parents encourage you to take naps during long, hot, summer car trips? Mine did. It was a way of keeping kids from complaining and it helped the time pass more quickly for them – a twofold solution for weary parents. Same goes, historically, with the “siesta“. You get though the hottest part of the day while unconscious. That was then. This is now.

Back in the day when people worked more-or-less near their residence, they could go home for lunch and then take a nice, refreshing nap – and maybe also avoid the stifling summer heat. But those days are mostly gone – unless you live in a small village and work in the corner store.

City people rarely, IF EVER, go home for lunch or, much less, have time for a nap. Sure, they may have a big lunch, Spain’s biggest meal of the day, but logistically speaking, crossing city traffic in car or public transportation, each way, just doesn’t make sense. So city people have their big lunch, maybe lasting 2+ hours with a strong coffee at the end, rest and relax alone or with friends, and then go back to work for another 3 to 5 hours.

So WHO takes naps in Spain? Answer: nearly everyone, but almost never during weekdays except for small children or retirees. Teenagers almost never take naps during the week. Hormones. LOTS of people take naps on the weekend, however, (except teenagers) as it’s practically the only time they have free time to do it. And isn’t it annoying passing by shops in Spain and finding them closed, looking at your watch and it’s only 3pm?! 3PM!!!! That’s not only annoying, but also frustrating as it may be the only opportunity you have to go shopping. That, and at end of your work day at 8 or 9pm, you find everything is already closed, leaving you only Saturday morning to do your shopping – the time when everyone else is doing their shopping because they couldn’t do it during the week.

The “Siesta”, in Spanish, [is] derived from the Latin term for the sixth hour after sunrise.

These odd OPEN HOURS in Spain, 9am-2pm then 5pm-9pm, can be very frustrating to foreigners more accustomed to the 9-5 or 9-9 office/store hours in their home countries. I know it made me anxious upon arriving to Spain 9-years ago, but I got used to it. And once you change-the-chip and consider the workers’ comfort, it all makes sense – while also forcing YOU to relax a little more, like it or not.