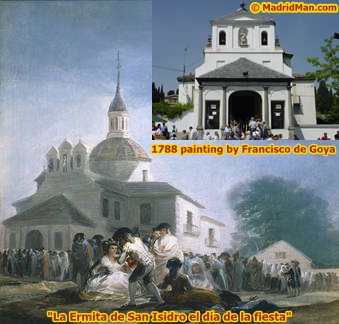 2008’s San Isidro is upon us here in Madrid, Spain. The official day for San Isidro, Madrid’s patron saint, is 15 May but San Isidro Events are planned for an entire month. Thursday, May 15th, is THE day.

The “Pradera de San Isidro“, which are the gardens or park grounds around the Ermita de San Isidro (the San Isidro Chapel – not to be confused with the church of the same name in downtown Madrid), is fortunately located very near me and is the location where Goya created many of his famous paintings of the city of Madrid more than 200 years ago. The Pradera de San Isidro is already lined with its stands and kiosks, the amusement park rides have been assembled, and the musical stage has been constructed. The only thing which remains are the people. The area will open Wednesday night at 8pm.

Going to the “Romería” (saint’s day party of the local village) in the Pradera de San Isidro is a love-hate situation. I LOVE going to see all the children and older folks dressed in traditional costume as “Chulapos” and “Chulapas” and watching the older folks dancing the “Chotis” – the typical 19th century dance danced mainly in the Lavapies and El Rastro neighborhoods at that time. But I HATE the dense concentration of people. At the peak hour it’s nearly impossible to walk anywhere, everyone being front-to-back, shoulder-to-shoulder and no one moving but everyone with a destination in mind. Total gridlock. And if it’s hot – as it often is at this time of year – even worse. 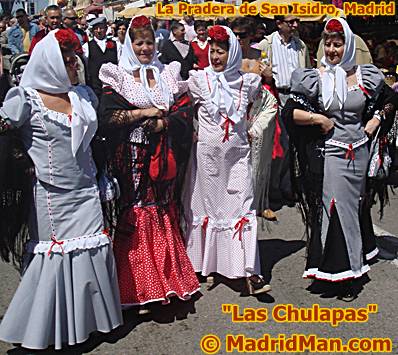 But the “Romería” has more things to offer which I do love. One can drink cool, fresh spring water from the fountain at the chapel, the Ermita de San Isidro. The fountains water supposedly contains magical properties which cure sickness. Be sure to get there early because the lines are long-long-long, particularly on hot days. Drinking the water is free but a donation is accepted. There’s also a nice rose garden next to the chapel.

What would a Romería be without ROSQUILLAS!?!? Rosquillas are a snack food similar to doughnuts but exist in two varieties: “tontas” and “listas” and are most typically found during San Isidro. Rosquillas are sold everywhere and are relatively cheap. Most people buy them by the bag and take them home to eat through the weekend. They’re a bit dry but very tasty with coffee or milk. Covered terrace restaurants line the main street and serve absolutely everything from chopitos, paella, tapas, and full meals. Wine and beer and widely available too. 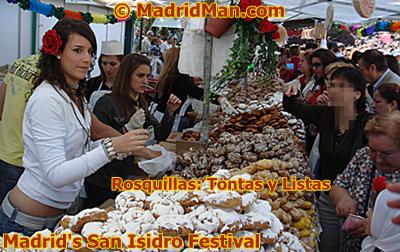 There is a mass during the day and concerts at night – which I can easily hear from my house – but I’ve never been to the Pradera de San Isidro at night. I understand it’s an electric environment. On the very last evening they have a firework display which I love to watch from the building’s rooftop.

There is also a “Berbena” in “Las Vistillas” – the gardens near the San Francisco Church (“Iglesia de San Francisco El Grande”) with views of the Almudena Cathedral. The area is quite nice and large and is traditionally the place to watch chotis dance performances on stage. I’ve attended this twice in the last two years but will not go back this year. Lately, while the dances take place, the thousands of teenagers surrounding the stage and in the gardens pay no attention, more interested in their Botellón drunkfest than the cultural performances surrounding them. The teens are densely packed side-by-side, their plastic bags and empty beer, wine, and calimocho-mix containers littering the ground everywhere. It’s not a nice seen, unfortunately, This area has been lost or overtaken by underage drinking.

The annual monthlong bullfight festival, “La Fería de San Isidro”, takes place in Madrid’s bullring, Corrida de Toros de Las Ventas. It started this year on the 8th of May and lasts until about the first week of June. The near-daily bullfights start at 7pm, last about 2 hours, and are televised on cable (satellite) television but not on public television. Getting tickets to bullfights of San Isidro is nearly impossible. “Bonos” or annual passes to the feria are closely guarded by people who renew them year after year for a high price. Few non-bono tickets are available and those few which are snapped up quickly in the first days they go on sale just before the feria starts.

Since San Isidro falls this year on a Thursday, nearly everything closes except for many bars and terraces. Friday is a normal workday but some people will choose to stretch the holiday into a “puente” or bridge the Thursday into a 4-day weekend. The weather forecast for Thursday is partly cloudy and 73ºF/23ºC with rain the day before and the day after San Isidro. Looks like the weather gods have smiled upon us this year.

The entire San Isidro Program (in Spanish only): http://www.esmadrid.com/sanisidro/