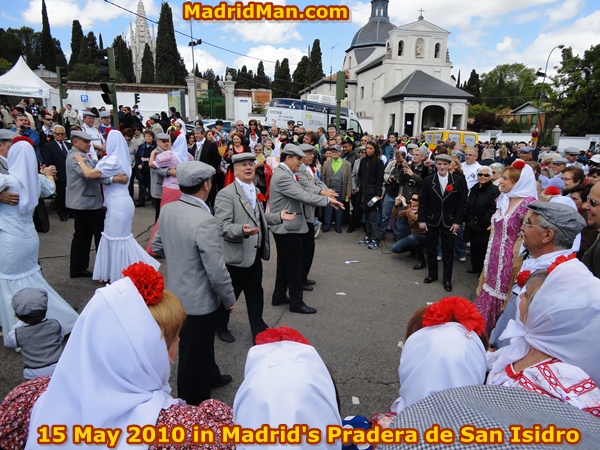 Today, 15 May, is Madrid’s Patron Saint’s Day, San Isidro el Labrador. And, as every year, the city of Madrid organizes events and entertainment for a 3-day span. This year the festival fell over a weekend. And even more luckily, it was a nice, cool day, unlike the very hot holidays of years past.

The Gran Vía was closed to traffic all day today to celebrate the boulevard’s 100 Year Anniversary. That’s cool, but it doesn’t have anything (or much) to do with San Isidro but at least they took advantage of the opportunity to provide several venues promoting the Patron Saint’s Day with typical, historical dances and concerts. I avoided this shoulder-to-shoulder area in favor of the more authentic experience in the “Pradera de San Isidro“.

And it was in this park where I spent part of the morning and another part of the afternoon. As mentioned above, the weather participated wonderfully, being only partly cloudy, cool throughout the day, and worthy of a light jacket and comfortable shoes.

This year, I chose not to wait in the long line to enter the “Ermita del Santo” nor the longer line to drink the waters – which have “healing powers” – from the spring alongside the chapel. Instead, I enjoyed the performances offered by the “Castiza” dance groups, all dressed as “chulapas” and “chulapos“, and dancing “El Chotis” and other traditional dances from Madrid, Spain.

More parents dress their small children as those “chulapas” and “chulapos” than do the parents themselves but sometimes you have entire families all dressed up in their cute dresses and carnations in their handkerchief-covered hair or checkered vests and caps along with carnations in their button-holes. The kids are adorable all dressed in traditional costume.

Hundreds, maybe thousands of people were  attending the mass today at noon but I found a path along behind them to get to the uphill food-court. At first glance it looks like any county or state fair in the United States complete with cheesy games-of-chance.

But further up you have one food-stand after another, covered terraces, and some of the largest paellas you’ve seen in your lives. They had EVERYTHING, from patatas bravas, chopitos, chorizos, calamares,  gallinejas, sandwiches, and lots of tinto de verano and beer. 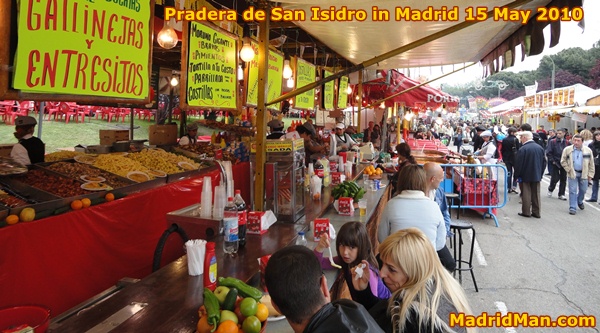 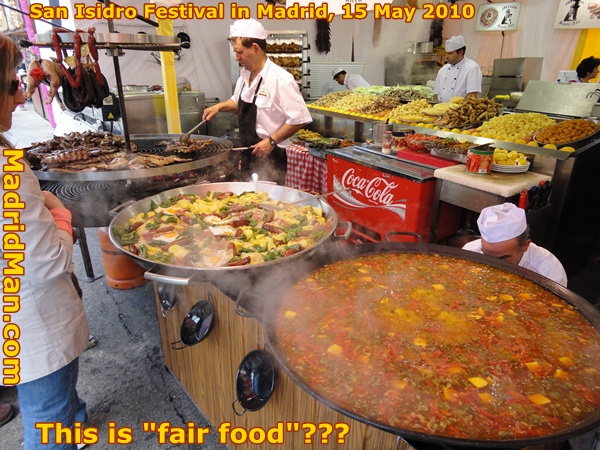 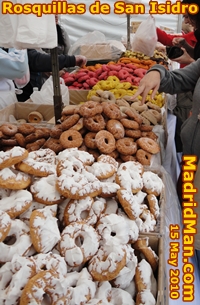 And let’s not forget the “Rosquillas”, las tontas y las listas, which are like doughnuts with different sweet toppings. You can’t pass up buying a dozen or two. I love “las listas”.

There’s also a large amusement park at the top of the “Pradera”. I went one time and walked around but wasn’t much interested in the rides at my age.

And although I won’t attend, they have concerts throughout the night in the “Pradera” and a fireworks display at the end of the fiesta. I’m fortunate to have the park about 20 minutes walk away from me so seeing the fireworks is easy from the rooftop terrace.

Who attends the fair in the Pradera de San Isidro? Some may say only “nationalists”. Others say only low-class people. And still others say that more foreigners attend than Spaniards. I’d say they’re all wrong. The fair is not only an event to reflect on Madrid’s past but also to embrace the present – not to mention an opportunity to keep us in touch with its historical dances and songs. This is never a bad thing. I love the fair, the dances, the food, the costumes, and seeing so many people happy together. Can’t wait ’til next year.