Every American kid remembers long, 20-hour drives to Florida in the back of your station wagon on summer vacation. This pales in comparison to the meager 6 hours driven to Porto, Portugal from Madrid, Spain. That is to say, 6-hours estimated time on a normal day.

We left on Thursday afternoon, the beginning of the Puente del Pilar – a national 3-day weekend when everyone in the country is on the move. El Pilar is officially on Friday, the 12th of October in Spain. We did meet with some traffic from Madrid until the other side of Segovia but that was it. We were shocked. Returning on Sunday afternoon was the same. It was smooth sailing until we reached Segovia and then we had stopped traffic. But the gods were smiling on us as the traffic lightened shortly thereafter and were only delayed maybe 30 minutes.

So we arrived in Porto, Portugal at about 2am after being on the road for 8-hours. This included a 1-hour dinner stop just at the Spain-Portugal border at about 11pm. We checked into the only 5-star hotel in Old Porto, Portugal, the Hotel Infante Sagres, in Old Town Porto. Porto, by the way, is called Oporto in Spanish. The outside of the hotel is really plain and the construction around the front of the hotel didn’t help our spirits much after being on the road all evening either.

We walked parked the car immediately in front of the hotel, the doorman directed us to the desk, and we checked in. The hotel itself, inside, is probably the most elegant hotel I’ve been in  – including 2005’s 4-star Hotel Alhambra Palace. This Porto hotel was elegant, historical, and something out of the 1930s. The staircase was incredible with it’s stained glass work from top to bottom. The old elevator with the cushioned seat on one side was a surprise to us. The lounge rooms, old bar, and seating areas throughout the ground floor really showed this was someplace really special in its heyday.

The room itself was pretty simple but ours, on the 4th floor, was one of the few with a balcony facing the front of the hotel. It had a nice view of the construction mess below and, to the right, the main city square. The room was of average size but the bathroom was something special, large, tiled, and with all the 5-star extras you expect. The bed was a queen size and comfortable. We left the balcony window doors open most nights although it was cool. There were lots of TV stations in English, Spanish, and Portuguese but mostly news and economic stations. The one Spanish station we watched was TVE. The one English station we watched was CNN.

Breakfast was included with the room and it was given in an elegant dining room, chandeliers, formal waiters, buffet breakfast with eggs, hams, bacons, cheeses, breads, a dozen fruits, and good coffee.

Thursday night was straight-to-bed. Friday morning we slept late and just made it to breakfast before the 10:30am cutoff. We got out to the streets of Porto by noon, perfect, pretty well-rested and ready to see the city. It was a beautiful day, perfectly sunny and about 68ºF – a perfect day for MadridMan. 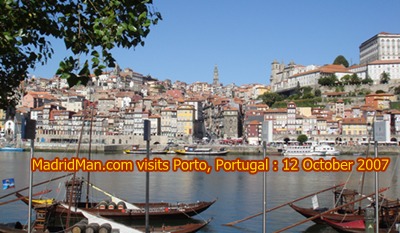 We decided to go directly to the City Sight Seeeing Hop On Hop Off Bus and take the red circuit first, then the blue circuit. This was a wonderful way to see the city in about 3 hours total. We took one circuit, didn’t get off until the end, then got on the shorter blue circuit route which crossed the Ponte de Don Luis I (bridge) over the Rio Douro in Porto – which is the same Ría de Duero in Spain – in the village of Gaia to see the Port bodegas, mostly empty now. What a great trip on the top deck of the double decker bus and multiple languages to give you explanation.

We got off the bus and walked along the picturesque and chose one of the many terraces for lunch where we had cod – very typical in Portugal. We were under an umbrella on the terrace of Restaurante Simbiose on Rua Infante D. Henrique, Nr. 133. Good food, good prices, and we resisted the urge to order and entire bottle of Vinho Verde – which is a kind of carbonated white wine and the most typical Portuguese wine. It would have been very refreshing on this warming day but we feared the resulting sleepiness would hamper our sight seeing energies. So fine. One glass only.

After lunch we took a long walk along the river, walking towards the Atlantic Ocean. We didn’t walk that far but only to the edge of Porto’s old town. I was so impressed with the city, very enchanting, very “Old World”, very little renovation or modernization going on here. It appeared to be unchanged in 40 years. Streetcars continue to operate throughout the old city of Porto and I was surprised they were filled with tourists – ONLY locals going to/from work or getting around the city. I was also surprised to see so little immigration here. There was almost no evidence of other cultures apart from Portuguese except in some of the restaurants where some Brazilians worked as servers.

We went back to the hotel at about 7pm to relax until dinnertime, take a nap, watch some TV, and just unwind. Not wanting to leave the room by 10pm, we decided to simply order room service. And after the huge lunch we had we only ordered sandwiches and white wine.

We did a little better the next morning, Saturday, waking at about 9am and made it to our elegant breakfast downstairs with no hurry. This day we drove 45 minutes to the nearby village of Guimarães. Wow. What a town. So beautiful, clean, in very very good condition, no graffiti, and much of the old town is from the 15th century. It’s a very small Old Town so we walked it all in about 2 hours and had a simple lunch in a terraza. This town is a must-see easy daytrip from Porto. Very impressive, clean, nice, OLD, and tourists of Spanish and Portuguese nationalities mainly.

After lunch and another short walk, we left Guimarães for the nearby city of Braga. The name, Braga, always made me laugh because “Bragas“, in Spanish, means “underwear”. We liked Braga but not as much as Guimarães but was worth the 2 hours we spent walking the Old Town, entering the Cathedral and countless other churches, and visiting the Santa Barbara Gardens. It was near the gardens where we stopped for merienda at about 6pm for a coffee and pastry in an old, small pastry/coffee shop. Good visit, Braga. Now back to Porto.

We get back to the hotel, shower and change, and leave for our 9pm dinner reservation at the historic Café Guarany, just around the corner from our hotel, on Avenida dos Aliados, 89/85. There, we had our dinner with a FADO performance – just what we were looking forward to for this trip. FADO is a Portuguese-specific form of singing, usually done in a dark setting, and songs are typically sad or melancholy. The Fado singer, Joana Costa, is very talented, young, and obvious enjoys her work. Our table was two tables from the performance and we enjoyed ourselves as the singer involved the full dining room – full of international tourists. The Fado show was free for those with dinner reservations.

After the good dinner and good fado entertainment, we left wanting more, some more
authentic Fado – if it existed. Knowing how flamenco is in Madrid I somewhat doubted having an “authentic” Fado experience. We went back to the hotel to ask at the desk. The suit-wearing reception attendant suggested a place called O FADO, about a 10 minutes walk in Old Town Porto. We arrived at about 11:30pm and walked in to a full, very rustic dining room. The performance was just finishing and no table was available. We were told to wait a few minutes, and were seated at a table for two in the center of the room, right in front of the performance area. The next performance was at midnight and we ordered a required minimum consumption so we ordered a bottle of Vinho Verde. We enjoyed the 2-hour show, ending at 2am, mostly in the very dark room with melancholy songs, a good view, and good conversation – in English – with the traveling Brazilian couple next to us. We were surprised we weren’t charged for entry to the show, only 13 Euros for the bottle of wine. A good deal! Many others around us had ordered dinner. Our walk back through Old Town at 2am was wonderful, quiet, safe, and we admired more old, run-down yet architecturally beautiful buildings on our way to the hotel. What a nice Saturday night, our last night in Porto, Portugal.

Sunday morning we woke at 9am, had our last wonderful breakfast in the hotel, sat in the lounge awhile to enjoy the surroundings, and then packed up and left the hotel at about 10:30am, paying the 23 Euro room service tab fo the sandwiches and wine. Putting our bags in the car, we walked through Old Town Porto one last time, visited the cathedral and poked our heads in the few open shops, and slowly made our way back to the car and left Porto.

We weren’t looking forward to the likely 7 or 8 hour drive but it went surprisingly well with absolutely no traffic. SHOCKING! The weather was perfect. We finally reached our only traffic jam near Segovia and took a quick pit-stop in an “Area de Servicio” for a bathroom break before entering the long wait in traffic. It was about 7pm. Wow. That place was PACKED with cars, trucks, and people!! Everyone stopping for the same reason we were. Men were seen coming out of the bushes after urinating and the lines at the bathrooms – for women – was outside the building and around the corner. Yikes. So I, being a man, walked past about 40 women and directly into the empty men’s restroom and thought, “My goodness. This should be a crime.” I felt so guilty passing all those waiting and anxious women. Got back on the road entering the traffic jam. But 20 minutes later we were flying freely at the maximum+ speed limit on our way to Madrid. No problem.

What a great trip. We loved Porto, Portugal and hope to return with more time – and to ride a streetcar.

Share THIS on Facebook!
This entry was posted in Travel and tagged Porto Oporto Portugal Travel. Bookmark the permalink.