Do they BOWL in Spain? I’ve got news for you. They do! But it’s certainly not a popular sport NOR a popular form of recreational entertainment in Madrid. Bowling in Spanish is…. “BOWLING”! But the Spanish word for bowling or the place where you go bowling is “Bolera”. Spaniards will often say, “¿Quieres ir al bowling?” (“Do you want to go bowling?”) – which sounds so strange to my American ears.

Last night a Spanish buddy and I went BOWLING to a nearby bowling alley in Madrid. We go bowling about once a month and go to a couple different places. We’re even MEMBERS at one of them! That shows you we’re serious about our bowling. hehehe…

So we arrive at the local lanes, about a 15 minute walk from my house, and go inside. The place was recently totally renovated, top to bottom – or so you’d think, given the opportunity to do so. The inside is quite nice, new bar, new billiards area, new table-top-soccer area, new bathrooms, the works. This was our second time to this place since they’d renovated it.

I recall the first/last time we went. I was immediately impressed with its interior. Nice! I was more than a bit amused, however, to find stamped on all the balls, “BRUNSWICK USA” – which is one of the most popular bowling products companies in the United States.

Went to the bowling ball rack to choose our preferred size, weight, finger-hole sizes, and took the pick of the litter – of all runts. All were old balls, full of nicks, gashes, & scrapes. Disappointing.and took our terrible balls to our assigned lane, placed them on the ball return rack, put on our shoes, and and loosened up. First, I have to tell you that not only were the bowling balls horrible but also were the old bowling shoes with frayed laces. The ball return equipment too appeared to be from the mid-1970s and all carried the name BRUNSWICK USA on them. I’m now more and more convinced all this equipment was sent over on a slow-boat from Podunk County, USA after some bowling alley went out of business and sold off their “assets” – HA! Assets. This stuff should’ve been in the liability column.

Still, having BRUNSWICK USA surrounding me swept me back to when I was 10 years old and on a Saturday morning bowling team. I felt all warm and fuzzy.

Throw the first ball down the lane. Hmmm.. I swear there’s a strange, alternating thumping sound from the alley as the ball reaches the pins. Must be the ball. Try another ball. Different ball – same result. Good lawd, the lane’s warped close to the end! My goodness. “Could this place BE any worse?” (in my best “Chandler” voice from the popular TV series “Friends“) So we change lanes only to get the same result. I look down at the end of the lanes were the pins are and see an odd-looking pair of body-less legs standing in front of my pins. Then one leg disappears. Then the other. Hmmm.. That’s strange. What if I throw this ball now and those legs reappear down there? The resulting limb severing would be worse than the Normandy Beach scenes in the movie “Saving Private Ryan“.

Finally we find a lane which is semi-flat! Thank goodness! Now we can
enjoy ourselves with these ripped up bowling balls. Still, it’s fun and
I don’t do half bad. 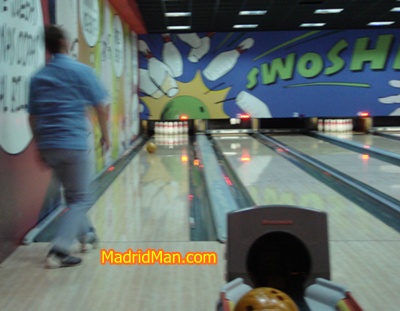 Next time we’ll have to go to our REGULAR bowling
alley at the Bowling Studios (see photo) in the Kinépolis complex
in the Ciudad de la Imagen. There, they also have a multi-plex cinema,
restaurants, and more. Thing is, you have to drive there and it’s not
all that close to me but the lanes, balls, and everything is new new
new. THERE, we’re card-carrying members and I’m looking forward to
going back.

Photo at Left:
MadridMan at the “Bowling Studios” at Kinepolis – a GOOD bowling alley!  – photo from April 2007 (don’t pay attention to the direction of the ball – err.. I was practicing?)

At the Bowling Studios they have monthly tournaments and was even tempted to “Show these Spaniards how a REAL AMERICAN bowls!” Afterall, we invented it, didn’t we? Okay, I don’t think we invented but we certainly popularized it! But I never signed up for the tournament after seeing a few people practicing on lanes near me. Wow, could they bowl! My Spain-based, season-best score of 190 points would likely only embarrass me when competing with these guys who have it all down to a science with the swinging back of the leg, the right-to-left spinning of the ball as it nearly gutters to the right and then swerves back to the center 10-pin making a strike nearly every time. I’m a straight-down-the-middle kind of bowler. Nothing fancy. But I do have good aim.

But it’s very enjoyable to go out bowling even though I tend to take it too seriously, too competitively. My bowling buddies all tell me this. At the Bowling Studios, LOTS of other bowling-for-fun participants in adjacent lanes are slinging the balls down the lanes with no apparent eye-hand-coordination, making lots of gutter balls, tossing the balls too high in the air and coming down with a terrible THUNK!, lots of slipping and falling over the line, and LOTS of laughter. Afterall, THAT’S what it’s all about; good, clean, AMERICAN FUN – IN SPAIN!

Who’dathunk I’d ever do more bowling in Spain than in the USA? Now that’s culture shock!

One Response to Bowling: In Madrid?