A “Puente“, in Spanish, literally means “bridge”, and is the custom of taking a holiday, like this one, effectively stretching the weekend, creating a “bridge holiday” or long weekend. All of these “Puentes” are often used for taking little trips within Spain or even abroad. But, what with all the economic crisis, people stay home too.

If you know someone whose first name is Pilar or María del Pilar you can wish them a happy Saint’s Day and take them out for a meal or, at the very least, give a phone call or nice email. Unfortunately, traditional Spanish names like Pilar, María, and Rosa are less often chosen for newborn children. It seems many “modern” parents want to put the past behind them, instead naming their kids after popular characters of current-day American TV series. It’s so odd hearing some mother yelling for her child in the street, “¡Brandon! ¡Venga! ¡A comer!”

Otherwise, the Fiesta Nacional de España is a big deal to many in Spain. Not many really think of it as a celebration of Columbus’ discovery, however. Mostly, it’s a nationalist day – and that carries a lot of implications. To an American and even to a Brit, this sounds perfectly logical. But to many, in a country still deeply divided from 40 years of dictatorship, this day is often associated with the extreme right, an appreciation, for some, of fascism.

On the morning of the 12th of October in the country’s Capital, Madrid, the (one-time) long military parade marches down the Paseo de la Castellana, presided over by Spain’s King Juan Carlos, dressed himself in military uniform. Along with Spanish soldiers and their tanks, military brigades from other countries will also march.

The parade is quite a spectacle, the only parade of its kind in Madrid each year, and is always well-attended. Get there early if you want to see more than the hats of those parading by.

According to this Munimadrid.es page (in Spanish), the festivities begin at 9:55am and the parade starts marching down the Castellana from the Plaza de Cuzco, passing through the Plaza de Lima, and then ending at the next major intersection at calle Raimundo Fernandez Villaverde and calle Joaquín Costa (metro Nuevos Ministerios). The “traditional” route is 4.9 kilometers while this “abridged” route is only 1.5 kilometers. I haven’t read yet why they decided to shorten the path. The economic crisis, maybe? They wanted to save money? Might be a good idea, especially after 2008’s 250,000€ price tag which drew so much criticism.

People wishing to watch the Madrid parade from abroad can likely do so LIVE via TeleMadrid SAT and also TVE– whose links can be found on the Spain Radio, TV, Music, & Movies page. 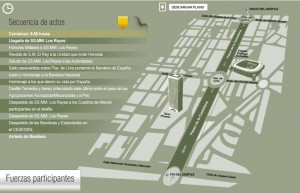