According to “Ecologistas en Accion“, the Madrid City Government’s “Madrid-Río” project – a Manzanares River Beautification project including the tunnelization of the M-30 highway innerbelt – has destroyed or is in the process of destroying about thirty 100-year old trees which line(d) Madrid’s Río Manzanares. Ecologists claim that 30,000 trees have dried out or will have the same fate, being systematically “euthanised” by the project. Some of the older trees had been removed and replanted elsewhere – at great cost to the city – only to die a few weeks later.

I’ve walked the pedestrian esplanade from Príncipe Pío to (nearly) the Puente de Toledo and project “Madrid Río” is looking quite nice! But is it all about “looks” and nothing more? Are we so superficial? The banks are flat and no longer lined with cars filling the once topside M-30 highway, no more noise, no more traffic, no more (perceived) exhaust fumes – and nearly no more trees.

This newly created “Green Space” has included (or will include by completion of the project) the planting of 25,300 new trees. “Wow! That’s a lot!”, you say, and it is! (only 6,739 trees have been planted so far) The river-walk includes fountains on either side of the Puente de Segovia , several places to sit on the wall of the river’s edge as well as several benches, play areas for children, a nice flat surface for in-line skaters, and hundreds of young pine trees.

I’ve also seen several newly planted pine trees removed and new ones replanted because the former ones died. Why? Today, an article by Mario Toledo in the free 20Minutos newspaper, states it’s because the automated system designed to water the newly planted grass (in swatches of turf) does not allow water to reach the tree’s roots, causing it to dry out and die.

Anyone who remembers the area surrounding the PRE-M-30-river-project will tell you how nicely tree-filled this space was between the Manzanares River and the Paseo de la Virgen del Puerto (below the Royal Palace). But it’s “all in the name of progress,” right? Who cares if a few (thousand!) trees die in the re-construction of the riverbanks? Besides, oxygen’s overrated.

On the upside, after many many years of waiting – and GREAT expense to the public – the M-30 is quietly buzzing along underground and the river’s tall banks are taking shape.

14 February 2011 Update: Of the 4 mature trees seen in this blog entry’s photos from October 2010, the ones located on the west side of the Rio Manzanares next to the Puente de Segovia bridge, only 1 poor soul remains – 4 months later. That’s sad.

See the below 2008 video, in English, about the Madrid Rio Project.

See some photos of the (nearly) completed river project below, thanks to the UrbanScraper blog (in Spanish): 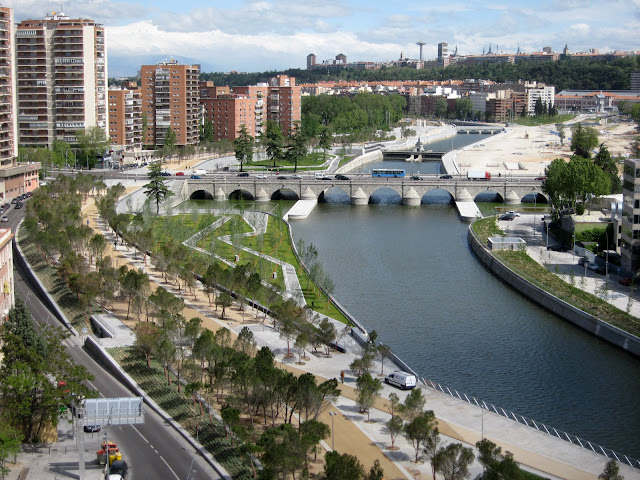 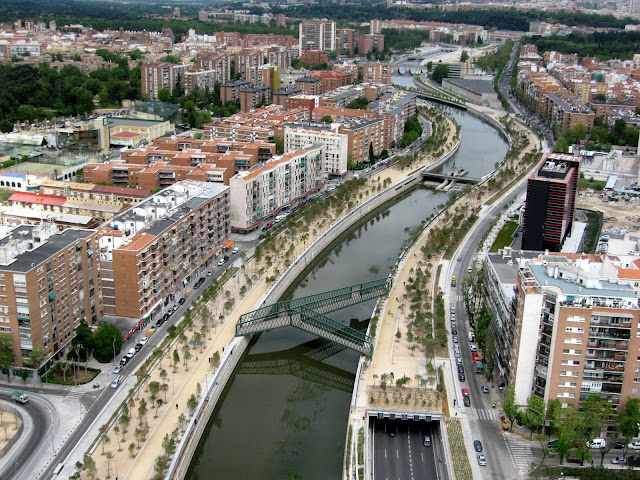