You heard me! Thanks to Spain’s “La Sexta” TV channel, tonight’s “El Clásico” between La Liga powerhouses Real Madrid and FC Barcelona will be televised on “free”/air TV as well as live online. THANK YOU, LA SEXTA!! In other words, this will NOT be a Pay-per-View event nor will it be televised exclusively on satellite/Canal+ television. That’s great news.

You can watch it LIVE ONLINE HERE on La Sexta’s website. Be sure to check-in early in order to get to watch the game as there are only a limited number of “ports” through which to watch the game – albeit hundreds or even thousands of them. Still, you don’t want to get locked-out.

I’ve also heard/read there are other places at which to catch the game live online – although I can neither validate this nor negate it. See this website for possible links to other sources “broadcasting” the Real Madrid-Barcelona game live online. There, they recommend you tune-in at least 30-minutes before the game starts. 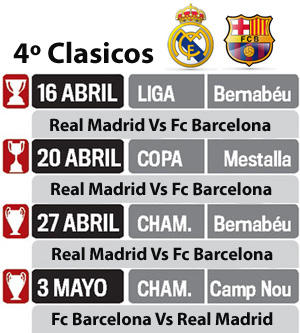 As I’m sure you’re aware, this season there will be an unprecedented FIVE “El Clásicos” between Real Madrid and FC Barcelona, FOUR of which come in a 3-week span of time. (see graphic at right) Wow. That’s an Real Madrid-Barcelona fan’s dream!

Tonight’s match-up is in “La Liga”, Wednesday’s game is for the “Cop del Rey”, and the last two go towards “The Champions League”.