It’s so nice to have a GOOD excuse to sleep until noon (or almost) – and surviving a New Year’s Eve in Madrid is an excellent excuse to do so. Last night all of Spain celebrated the changing to the new year of 2010 and all television channels were fervently covering the event.

On TVE, the festivities started around 10pm with a 1-hour montage comedy hour by José Mota (watch 1-hour video via link) with dozens of short skits parodying countless politicians, stars, public figures, and news events of 2009. We laughed a lot. 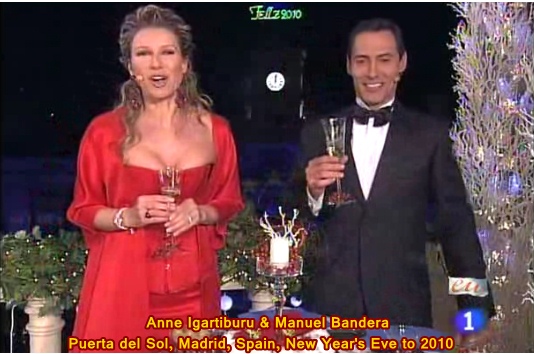 About 20 minutes before midnight, the formally-dressed TVE countdown team of Anne Igartiburu, Spain’s “Mira Quien Baila” host, and dancer-actor Manuel Bandera stood on their Puerta del Sol-facing balcony, with their breath perfectly visible in the freezing cold windy weather, constantly wrung their hands. Ms. Igartiburu was bare-shouldered but, from time to time, pulled her wrap more tightly around her to break the wind momentarily and Mr. Bandera frequently stuck his hands in his pockets. Poor things, freezing to death. Hope they were paid well.

The principal player on television is/was TVE (Televisión Española), Spain’s National Channel 1 whom, beginning today, January 1, 2010, will no longer have commercial advertisements and no interruptions during its specials, series, and movies. At least that’s what they say. I have to admit I don’t see how it’s possible to survive without advertising income. But then again, it is a State-run entity. So does that mean our tax Euros are going towards its maintenance? I predict within a year’s time they’ll have commercials again. Besides, how are we going to decide at what point in the movie we’re going to go to the bathroom?

Oh sure, we changed channels for a couple minutes before midnight to TeleCinco to see Belén Estéban’s new face after serious (and much needed) plastic surgery but that’s all. She and some other guy were the official presenters standing in front of the open windows facing Puerta del Sol‘s Casa de Correos and its enigmatic bell tower from where the ball will drop to ring in the new year.

After the fireworks and ending statements were made, Televisión Española began a montage of scenes of the previous decade’s festivities and personalities. The Spaniards with whom I was sharing the experience sang along to the songs, old commercials, and commented about how young they all looked in their day.

We shared a bottle of wine, sidra, and a simple selection of embutidos, cheeses, and patés. It was a good evening and I finally found my way home and to bed by 3am, sleeping this morning until 11am. It was a good, deep sleep in a new year.

Happy 2010, World! Be kind to one another, please. May we pull ourselves out of this “Crisis” and begin protecting the environment. We all have a part in this.

Below: The countdown to 2010 with TVE Hosts Anne Igartiburu & Manuel Bandera