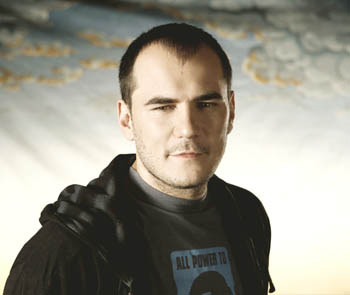 Ismael Serrano is probably my all-time-favorite Spanish singer-songwriter. I’d say he’s been considered a Spanish folk singer because his songs are mainly ballads, often about social issues, love, and humanity.

According to the Wikipedia page on Ismael Serrano,:

He was born in the neighbourhood of Vallecas of Madrid (Spain) in March 9, 1974. After studying Physics in the Complutense University of Madrid, Ismael Serrano started his musical career in the early nineties in
Madrid, singing folk based guitar music in a café circuit, at abashedly political venues like Libertad 8, Galileo and Nuevos Juglares. The movement proved to be very popular, inspired by the 20 year old
‘Protest’ song movement under the dictatorship of Francisco Franco, as well as the Nueva canción movement of Latin America.

I first became a fan when I heard the song “Kilometer Cero“, a song Serrano wrote and performed for the 2000 comedy movie of the same name, “Km.0“. I haven’t seen the movie yet – and heard it wasn’t all that good – but the music video for the song shows scenes from the movie as well as Ismael Serrano himself walking the streets of Madrid, from a Madrid rooftop, and (presumably) from an large kitchen in a huge, old flat in downtown Madrid. Watch the “Kilometer Cero” music video below. 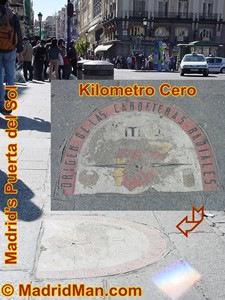 Since hearing the enchanting song “Kilometer Cero” I was hooked. I remember well listening to the song in the early 2000s, sitting at my then day-job, and getting all teary-eyed while daydreaming about Madrid. And since then I’d bought all of his subsequent CDs, growing more and more interested in his work.

“Kilometero Cero” refers to “The Zero Point” in Spain, the geographical center of the country & the point from which all other distances are measured. This location (although not exactly the actual mid-point of the country) is marked by a half-circle plaque on the sidewalk in front of the Comunidad de Madrid Government building in Madrid’s Puerta del Sol. (see photo at right)

Most of his songs, slow and soulful, makes a person imagine himself exploring the historic streets of Madrid, contemplating life and observing human nature. Many songs, whether or not you understand Spanish, have the ability to bring you to tears. His guitar playing is sensitive, with rhythms and chords not often attempted. His voice is strong, precise, and unmistakable. His self-written lyrics are clear, great for the person whose first language is not Spanish.

All of the songs from his 1998 CD, “La Memoria de los Peces”, 2000 CD “Los Paraísos Desiertos”, and his 2002 CD, “La Traición de Wendi” were definitely his best work but he continues to make good music.

One can visit his website at http://www.IsmaelSerrano.com for all lyrics – both in Spanish AND the translated version in English – as well as song and video clips, discography, photos, tour dates, and more.

Since moving to Madrid at the end of 2005 I was anxious to see Serrano live in concert. But every time he came to Madrid his shows were always and immediately sold out. Not to be deterred, I found him playing in Tarragona City on Spain’s eastern, Mediterranean coast and decided to make the 3-hour train trip, reserve a hotel for 2-nights, and see my hero live. What a show. He played alone onstage with nothing but his voice, his guitar, and a microphone  to roughly 75 or 100 people in a small venue and sang all the songs I knew. I literally had goose bumps throughout the show! Happily, everyone stayed in their seats during the concert until the last 2 or 3 songs when he picked up the pace.

Ismael Serrano is performing 2 shows here in Madrid later this month but tickets are already sold out. Figures. If I want to see him live – where tickets are still available, I’d have to travel to Jaén (tomorrow!) or Salamanca in January (hmmm… that one’s a possibility!).

Of course I don’t personally know Ismael Serrano, but he seems like a very accessible person, someone very friendly and open. His lyrics and comfortable stage persona while addressing the audience makes you think he’s someone you could invite over for a beer and he’d happily accept. Who knows how he is in real life but he’s someone I’d like to meet someday, at least to thank him for making me “feel”. His music meant a lot to me in those years before moving to Madrid.