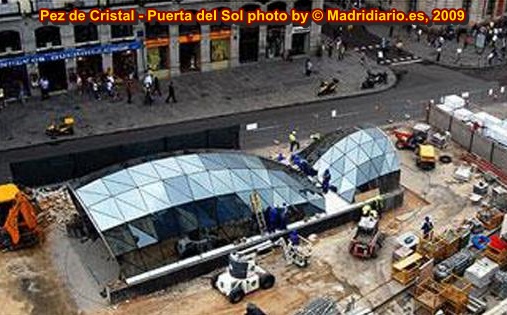 The “Pez de Cristal” – or “Glass Fish” – will be inaugurated as the new landmark in Madrid’s Puerta del Sol on Saturday, 27 June 2009 at 11am and will be presided over by the President of the Comunidad de Madrid, Esperanza Aguirre & Spain’s President José Luis Rodríguez Zapatero. The first day of normal operation will be Sunday, 28 June 2009 at 5:15am. The controversial structure, in the rounded shape of a fish, was likened by Esperanza Aguirre herself (the Regional President of Madrid) as what the glass pyramid is to Paris’ The Louvre Museum. Well, I don’t know about all that but it does have ‘glass’ and ‘controversy‘ in common at the very least.

Just what is the “Pez de Cristal” and why do we need it? This is a good question, one many of us will be trying to answer for at least 5 years in the future (if the fish lasts that long). The Glass Fish is the entry/exit to the new Cercanías-train hub, the only one now in Old Downtown Madrid, allowing natural light into the belly of the enormous space below ground. This station will also connect cercanías lines between Chamartin and Atocha train stations, completing the infamous”Túnel de la risa“, and carrying passengers directly to Kilometro 0 without taking metro or buses as was before necessary.

The new station will also connect metro lines 1, 2, and 3 with cercanias lines – but I have to wonder if the old, historical Puerta del Sol metro station entry points will now be removed. Surely not. Apparently, the below ground space is large enough to house a 60-story building horizontally, making it the largest below-ground man-made cavern in the world. Also, some of the remains of the Buen Suceso Church, unearthed during the excavation,  will be on display. Their discovery, in large part, delayed the station’s construction due to their careful study and examination.

Many people in the blogosphere think the comparison of the Glass Fish with the Glass Pyramid of Paris’ The Louvre is far fetched. They are both glass, that’s true. They both are comprised of attached glass panels, allowing natural light into the space below ground. Many other bloggers also think the introduction of a super-modern structure into the historical Puerta del Sol is a mistake. Still others believe the fish will be covered in graffiti and the panels scratched and marred within days. This IS likely to happen.

It’s always nice to have something which adds to the skyline or structures which give people the impression that something “new” is going on, staving off that old, hum-drum, complacent, boring aspect which many historical cities eventually face – and it’s true that Madrid has very little of that going on as compared to (dare I?!?) Barcelona. Personally, I think a better choice could’ve been made. I commend their goals, however.

I’m anxious for the inauguration of this new station on Saturday, to take a first look for myself, which will seemingly end (?) nearly 5-years of construction on Madrid’s Puerta del Sol. Its inauguration will be the headline and lead news story for Madrid (and many Spanish) news media outlets this week.