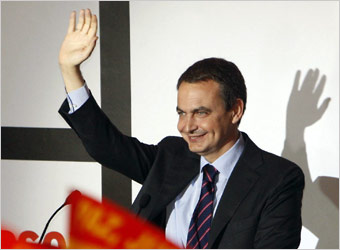 With the elections nearly over and 95% of the votes already counted, both the conservative party Partido Popular (“PP”) and the socialist party Partido Socialista Obrero Español (“PSOE”) have acknowledged the victory of PSOE’s José Luis Rodriquez Zapatero to be Spain’s president for another 4-years. Mariano Rajoy, PP’s party elect, has already called Zapatero congratulating him on his victory.

Today, Sunday 9 March 2008 was my FIRST Presidential election experience here in Spain. And what an experience it was. I cannot vote as I don’t (yet) have citizenship but I went with some friends whom did vote first thing this morning.

First of all, I love the Spanish voting system whereas the elections ALWAYS take place on a Sunday so more people are available and free to vote. NOT like when elections take place on a weekday/workday and a real effort has to be made, ask for work time off to vote, etcetera. I also like the “rule” which says no party, no candidate, no media outlet can make new claims or additional campaigning on the Saturday before the elections as it’s a day of reflection. I think this is due to a 1984 law – which I think is great.

Here, I watched BOTH of the 2 debates between Partido Popular’s Mariano Rajoy and PSOE’s José Luis Zapatero and found it very interesting. Luckily, finally, my Spanish comprehension has reached a point that I understood nearly everything said in the debates. And also, both candidates spoke very slowly, making it easier for me.

I was also impressed that there were no less than 10 PARTIES with candidates running for President of Spain. Isn’t that incredible? Can anyone imagine an election in the United States with TEN PARTIES represented? That’s just incredible. And they all get time on television. Ten Parties! Wow. And new parties are popping-up and others leaving every elections.

As is customary, as the voting started off, both parties claimed a pre-victory. But as the exit poll numbers rolled in things began to change as it seemed likely that PSOE would win the election. Both parties’ headquarters are located in downtown Madrid and both had large groups of supporters outside their front doors and also where all the speeches were made – OUTSIDE.

As time drew to the end, all parties made their speeches congratulating PSOE’s victory, EXCEPT for the Izquierda Unida (“United Left”) party – the 3rd most popular party in Spain – which critisized the two-party election system, not giving equal time or equal opportunity to their party. This guy was really angry but took full responsibility for the outcome while promising to continue fighting for the rights of women, immigrants, and those whom can’t fight for themselves.

People are passionate about the elections and with good reason. Spain is a country which LOVES to demonstrate. PSOE typically demonstrates in the Puerta del Sol while PP always demonstrates in the Plaza de Colón below the enormous Spanish flag. I won’t try to describe both parties here because there are always those whom would read too much into my words and start labeling my claims. Suffice it to say that PP is the right-of-center nationalist conservative party and PSOE is the slightly-left-of-center liberal party.

My day began today with the elections. LOTS of people in the streets on this Sunday morning. Shortly after that I went to the Teatro Real – NOW TWICE IN ONE WEEK – this time for a classical music concert with great seats. After that, I had Cocido Madrileño with friends in their home. After that I had a nice, long, cleansing walk home – much needed after that wonderfully heavy lunch – and then started in with the elections details on television. Again I ask, “Am I Spanish YET!?” hehehe… I guess not – but I’m working on it!

So congratulations to José Luis Rodriquez Zapatero on his win to continue his presidency 4-years more. PP will have another shot at that time – and will no doubt make a good campaign for it.