As in most of the rest of “The Modern World“, Spain recognizes working women in all the media outlets – including THIS one. Today is it, 8 March 2008.

Even I’ve noticed an obvious shift in sex of traditionally male positions. Most notably, to me, is the number of female doctors – at least in Madrid – in the hospitals and local doctors offices. The doctor I had when I first moved to Madrid 2 years ago was a man. Shortly after “joining”, that man left and was replaced by a 50-something woman. We get along very well, as well as with the man before her.

But in waiting for my turn to see my doctor I can’t help but notice that ALL the doctors at my doctor’s office (called a “Centro de Salud” or “Ambulatorio“) – except for one man – are women! One time I took a friend to a “Centro de Salud” in downtown Madrid after a non-life-threatening accident and he was attended by not one but two female doctors. I’ve even spent an unfortunate amount of time visiting people at hospitals here in Madrid and many of the doctors there are women too. And surprisingly, a high percentage of the nurses there are MEN! Wow! In many many pharmacies you’ll also find female pharmacists. Very common.

In addition to the public health-care sector, I’ve noticed more and more public bus drivers are women! This, to me, is very very surprising. The high majority of drivers are still men but I hadn’t seen a female bus driver in Madrid until about 9 months ago. Same goes with taxi drivers – which remains mostly male. I’ve seen maybe 4 women taxi drivers in Madrid in the last 2 years. This number may not change too much as driving a taxi is much more potentially dangerous than driving a bus what with the potential for robbery of a taxi driver, women being more of a potential target.

Police: Wow. What  a shift. I’ve seen so many female police persons on the streets. The seeming majority of the women working as police persons are giving out parking tickets and working traffic maintenance but I’ve also seen a number of policewomen carrying pistols for hard-core law enforcement.

But while there are more and more women working, their wages still are not equal to those those of men – which is still the case all over the world. But I things are improving – albeit slowly. The thousands of responsibilities at home still mainly go to the woman – whether they’re working outside of the house or not.

From the pages of Qué! newspaper (translated by yours truly):

“IQUALITY IS A LONG WAY OFF
Just ‘To Lend a Hand’ at home doesn’t help anyone
In the last year women have occupied two of three new jobs created in Spain. The news would be satisfying if the salaries would be equal to those of men in the same jobs. But the worst thing is that this step forward in the working world hasn’t meant the same thing for the domestic jobs in the home. There are people whom continue thinking it’s sufficient “to lend a hand”, but there’s an abyss of sharing tasks at home.”

It’s important for women to have all the same opportunities as men. I just wish Spain would do away with their sexual and age discrimination. It’s incredible to me to see job postings in newspapers offering XYZ JOB but they’re ONLY considering women. For example, “Seeking woman, age 19-26 years old.” Isn’t this shocking??? There don’t seem to be an age or sex discrimination laws on the Spanish books. Imagine a perfectly qualified male, 59 years old, applies for this same job and he’s told that no, he won’t be hired because A) he’s NOT a woman and B) he’s too old. WHY would they only consider hiring 21-29 year old WOMEN for that job? To me it’s obvious. The company offering this job wants to pay a LOWER SALARY. And why? Because they think a woman’s work is less valuable than the work of a man. And why the age restriction? Same reason. They think the value of a young person’s work is lower than a mature person’s work. Besides, right?, (tongue in cheek coming here….) a young woman doesn’t have a family to support, right? Why should we, “The Company”, pay her any more?? Shocking. Really shocking.

The Spanish working world really leaves a lot to be desired in MANY respects, not only the topic of the disastrously low salaries in general, but all to make the rich owners richer. That’s what it’s all about, right? Maximizing profits at the expense of everything else. These same rich owners are SO HAPPY for the influx of illegal immigrants willing to work for nearly nothing and with no benefits. This too makes the rich owners richer. Same with the working woman. If you can pay a woman, a young woman, or a young immigrant woman less – that means more money in THEIR (the owners) pockets. HUMPH! A hot topic for me. A VERY hot topic. 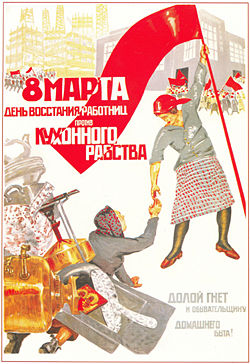 POSTER AT LEFT: Taken from Wikipedia’s page on The International Women’s Day.

The 1932 Soviet poster dedicated to the 8th of March holiday. The text
reads: “8th of March is the day of the rebellion of the working women
against the kitchen slavery” and “Down with the oppression and
narrow-mindedness of the household work!“. Originally in the USSR the
holiday had a clear political character, emphasizing the role of the
Soviet state in liberation of women from the second-class citizens’ position…