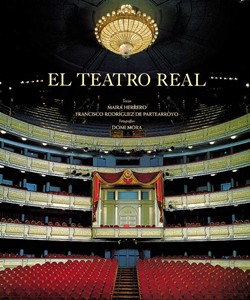 Last night I had the honor of attending the Ballet Nacional de España: Elegía-Homenaje a A. Ruiz Soler, El Café de Chinitas. This was an homage or dedication to Antonio Ruiz Soler – a flamenco dancer, choreographer, and director born in Sevilla in 1921 and died in Madrid in 1996. He was more familiarly known as “Antonio el bailarín”. So last night’s ballet was ballet with a touch of flamenco.

First, the place… It took place in the famed Royal Theater or El Teatro Real in Madrid, between the Plaza Isabel II and the Plaza de Oriente. (metro: OPERA) Wow. What a place. The place is grand. GRAND! And very nice. It was built in 1850 and closed in 1925 due to damages caused by the construction of the metro station, ÓPERA, just below the theater. It reopened in 1966 totally remodeled. It closed again in the mid-1990s for remodeling once again.

I’ve been inside twice or three times before, attending classical concerts but always sitting in the uppermost seats near the ceiling. The views are not the best from up there but thankfully they have big screen monitors, surprisingly, for these “cheap seats”.

Last night’s show was something special and my seat was on the ground floor, in the “Butaca de Platea” – definitely NOT the cheap seats last night. If you look in the photo above, I was seated on the lowest “covered” level at at the left. No screens were necessary here! What great views. What great sound. The orchestra was ethereal during the first half of the performance. 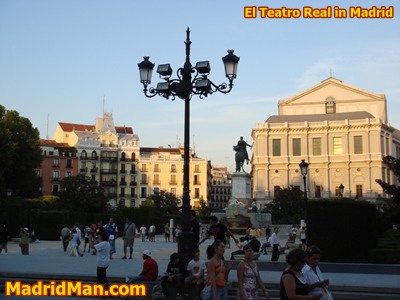 The first half of the performance of this production, called “Elegía-Homenaje“, of the Ballet Nacional de España was classical ballet but with just a touch of flamenco. The female ballet dancers wore solid color dresses. The men wore flamenco-style costumes. I must admit that I was just a tad bored in this first half but it was also somewhat entertaining.

At the 20-minute break, after just 35 minutes of performance, I got up to go have a glass of champagne at the bar which is the custom when attending the opera, ballet, or theater. Went upstairs a couple levels and turned left to what appeared to be the entrance to the bar. There were two uniform-wearing women standing at the door checking tickets – which I found odd. So I showed my ticket and she waved me through. What I thought was the entrance to the bar was actually a small room filled with VERY well-dressed people. All men were wearing suits and ties and the women in fashionable dresses – and then there was me, wearing my best jeans, shoes, and my best shirt, along with my shoulder back wrapped around my body. Yikes. I feel terrible UNDER dressed to be here. But fine. I’m here so I go to the back of the room where I find a small bar and two bartenders which are handing out glasses of champagne, errr… CAVA. With Cava in hand, I turn around to see a large, round table in the middle of the room. The table is covered with hundreds of little foods-on-melba-toasts, foods like tortilla de patata, cheeses, hams, paté, a tomato spread, a greenish spread, and a number of other things. I help myself the best I can with glass in one hand and food in another, trying not to break the melba toast all over my shirt – or the very spongy, expensive-looking carpet on the floor. Starting to leave for my seat before the beginning of the second half of the performance, I stop at the door to ask the woman there if this room is for everyone carrying tickets. She said something like, “No. This is only for those whom carry these particular seats.” I didn’t really understand it but gathered it was only for those carrying the more expensive “covered”, side/private seats. Oooookay! And here I just happened upon this room by chance! I know that in the public bar area – for common folk (ha!) – they charge 3 Euros per glass of champ…err… CAVA.

Back to the seat for the second half, called “El Café de Chinitas“. And WOW, what a second half. It lasted 1 hour and 25 minutes. This was true FLAMENCO DANCING – and also Sevillanas – but being ballet it had obvious ballet movements in the flamenco dance. Very very entertaining from beginning to end. The women were dressed in more flamenco-style dresses and the men also in flamenco or bull fighter-style costumes. The music, this time, was mainly performed by flamenco groups on chairs but a few numbers were performed by a rock or jazz band behind the curtain. On the full-size screen just behind the performance, separating the dancers from the band, was constant slow-motion video of images “inspired by” Salvador Dalí. And many of the songs sung were poems by Federico Garcia Lorca. There was a reoccurring character of Salvador Dalí as a child throughout the ballet performance. A few of the songs sung and performances actually gave me chills – which is always a good thing.

One very entertaining and funny set – which did not give me chills – featured a paunch man dressed in drag as a female flamenco dancer, complete with full plumage, makeup, wig, stockings, female flamenco shoes, and large fan. He had very manly movements, very comical at times, and very very entertaining. I wondered whether this was art or comedy – or a fusion of both, I presumed.

The end of the show, as with most works of theater, dance, or opera, included about 10 minutes of applause as the many groups were invited to the front of the stage for their share of the applause, then everyone, then the main characters, then the bands, then the main characters again, then the choreographer, then the director, then the entire group again, and on and on. Wow. My hands hurt by the end. But it did come to an end at about 10:20pm and I walked out the backside doors facing the Plaza Oriente and nicely illuminated Palacio Real.

What a nice evening. Hope I’m fortunate enough to visit the Teatro Real once again. I understand getting tickets to the OPERA in Madrid is nearly impossible, being sold out for months in advance by season ticket holders. 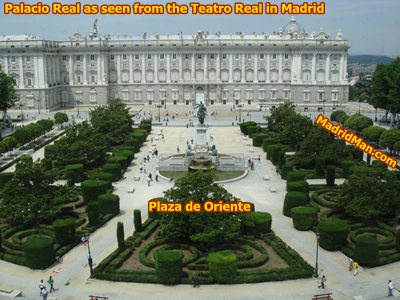