It really does seem like only yesterday. But in fact, 4 years have passed since the March 11, 2004 Train Bombings in Madrid by terrorists. It was a day when it seemed that time stopped altogether. Nothing else in the world existed.

In Columbus, Ohio, the night before the train bombings, I set my computer to record Madrid morning’s radio news which I did every night. The next morning, upon awaking, I’d burn the saved MP3 file to a CD-RW and then take it to work and listen there.

But this particular morning was different – and would never be forgotten. I turned on my computer as usual, eating my cereal while going to the Spanish news websites. And that’s when I saw it.

I’d recently been able to subscribe to TVEinternational through my cable service and so I turned on the TV immediately – at about 5am or 11am local Spain time. To my horror I saw the the horrible aftermath just 2 hours after the bombings took place. Atocha Train Station was chaos as were the streets surrounding it.

The Death Toll kept going up and up with every minute and my mind went immediately to friends I knew in Madrid whom took the trains through Atocha on their way to work. First thing I did was call off of work so I could better follow the situation and see if they were okay. Luckily, everyone one I knew was.

The next day I went to work and everyone there was asking about my friends in Madrid. While working, I followed the Spanish news online while also listening to the recording I’d made the night before the bombings. It was spooky. The recorded news program to which I was listening stopped what they were discussing and gave us the brief news, “An explosion of some kind has taken place at the Atocha Train Station,” but nothing more was known until shortly thereafter. I still have that CD recording and listen to it from time to time. 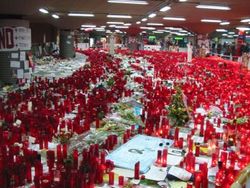 Roughly 10 days after the 11–M train bombings I flew to Madrid for my already scheduled Semana Santa vacation there. Some people at work thought I was crazy, as if I was flying into a war zone or something. My family was concerned too. I wasn’t worried in the least. In fact, worry wasn’t an emotion I felt since knowing my friends were okay. There was something which was drawing me to Madrid. I NEEDED to be there. I NEEDED to be with the people I cared about. I NEEDED to see all this for myself.

Madrid and Spain continues in a state of recovery. People never forget the event nor those whom were lost to this pointless terrorist attack on 11 March 2004. In general, Spanish people are VERY VERY resilient. They won’t forget what happened but they’re also not afraid to walk the streets or use the trains. For that I give them a lot of credit.