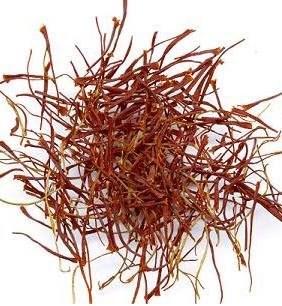 According to THIS El País Newspaper article, posted a couple days ago in their NEW El País In English edition, the vast majority of exported saffron labeled as “Made in Spain” IS NOT, in fact, made in Spain. The article states that Spanish saffron goes for 3,000 Euros per kilogram. Wow.

Everyone knows that saffron is an essential ingredient in making paella. They also know how expensive this strong-smelling, dark orange, powdery substance is. It’s usually sold in tiny quantities and gives paella rice its rich yellow color. More and more often, paella makers and sellers are not including this ingredient, but instead, a basic colorant and people are none the wiser.

So do the numbers: In 2010, 190,000 kilograms of saffron were exported – and yet local production totalled just 1,500 kilograms. That’s QUITE a difference! And yet, all the exported “Made in Spain” saffron is labeled as such although it’s grown and imported cheaply from countries like Iran, Greece, and Morocco.

Last year, only 0.8% of the “Spanish” spice was grown in La Mancha – the region in Spain where saffron is grown. Why do they do this? It’s because Spanish saffron holds much prestige throughout the world and supply cannot keep up with great demand.

QUOTE: Up to 90 percent of exports are fraudulent, according to farmers union ASAJA. “It’s shameful the prices they sell it at, even more so when they know it’s crap,” said one exporter, who asked to remain anonymous.

Technically, what they’re doing is not illegal under Spanish law – amazingly enough. But stricter labeling guidelines in the near future could damage reputations, marketing, and potentially lower the price of Spanish-grown saffron.

What the article does not mention is how “pure” the locally sold, locally produced saffron is. They do say, however, that a recent study by The Independent, a British newspaper, revealed that 40-90% of exported saffron “was made up of other residues of the plant- not the stigma“. That’s unsettling. Is there really any saffron in my paella??