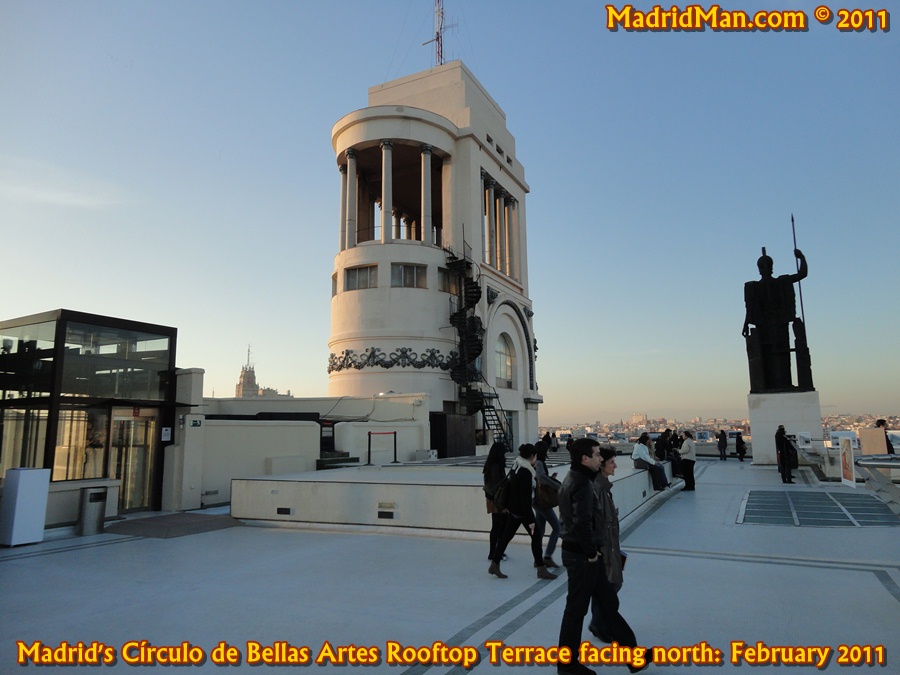 The other day I went to the rooftop terrace of the Circulo de Bellas Artes in Madrid. It was my first time and couldn’t believe I had yet to discover it. Sure, I’d been to the lower level Café & streetside terraza as well as attended many concerts in the different “salas”, but had seen Madrid’s skyline from this height before – albeit only about 10 floors up.

The Circulo de Bellas Artes is a non-profit cultural center founded by a small group of artists in 1880. It hosts art exhibits, theater, concerts, and even has its own radio station which features cultural programs, world music, and interviews with poets. 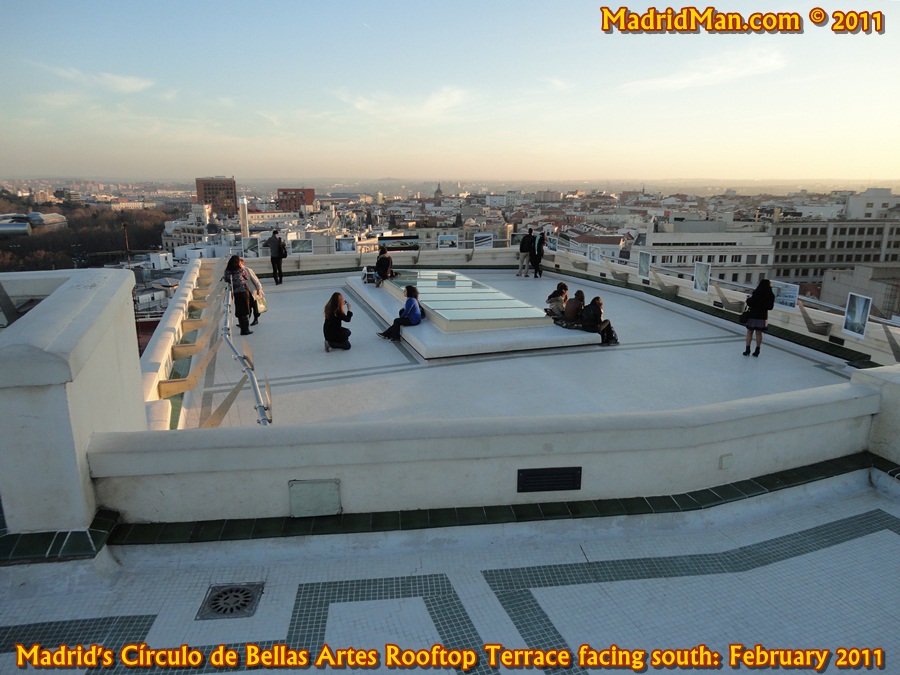 As far as I can assess, the rooftop space of the Circulo de Bellas Artes has only been open to the public for less than 2 years. (please comment if you have other info or experience) It’s also available for private gatherings with bar-service. If it weren’t for a Facebook friend who’d posted photos of her visit two days earlier I never would have known about it.

It costs only 2€ to take the elevator up and tickets must first be bought at the counter next to the Calle de Alcalá-side Café (just beautiful!) or entering from the side street Calle del Marqués de Casa Riera, between the streetside Teatro de Bellas Artes and the Bellas Artes book store. 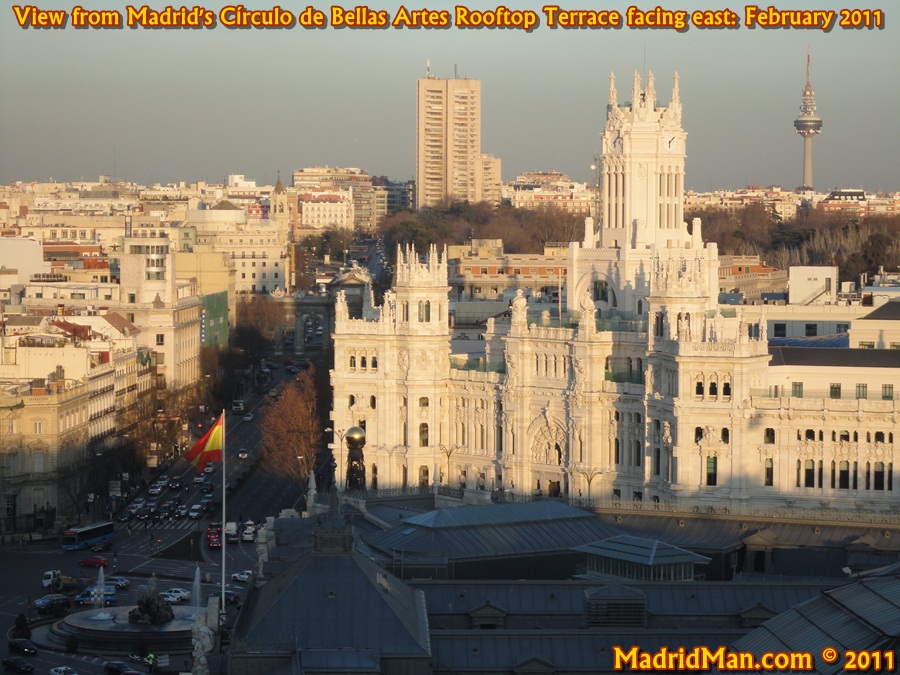 These days the rootop terraza is only open until 7pm but imagine it to be open later in the summertime months. I was there at 6pm, just before the sunset, and it seemed many others had the same idea. The light was beautiful on this typically clear-sky day in Madrid, giving a brilliant glow to the face of the Palacio de Comunicaciones (Madrid’s “new” City Hall) and Casa de América on the Plaza de Cibeles to name only a few. 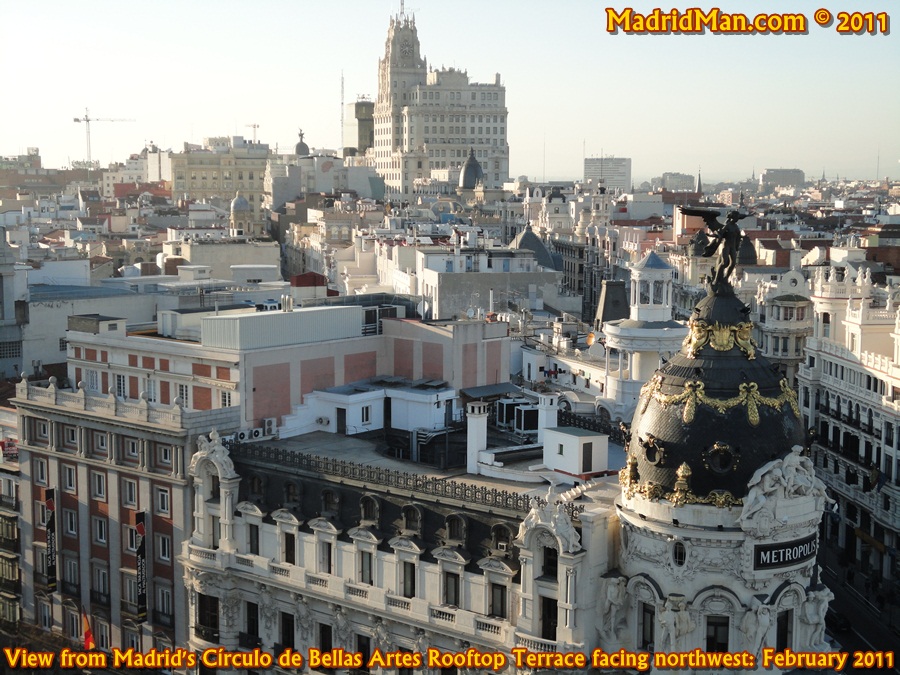 I was surprised to see the adjacent Banco de España had their own rooftop heliport! The “Metropolis” building’s tower-top angel was directly in front of us. And the Puerta de Alcalá and even more distant Torre España – “El Piruí” – were clear on an otherwise smoggy day. The tall Telefónica building’s clock tower on Gran Vía glowed in the sun’s reflection and near-rush-hour traffic formed far below us.

To say I recommend a visit to the Círculo de Bellas Artes – whether it be to the rooftop, café, streetside terraza, or attend a cultural program of some sort – would be an understatement.

Below Video (not mine): YouTube video of “Views from the rooftop of the Circulo de Bellas Artes in Madrid”. Posted March 2010.