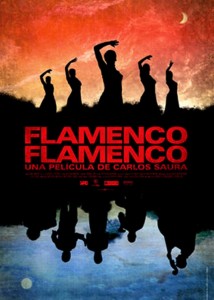 Today – at 4pm – I attended the Spain PREMIER of Carlos Saura’s new movie, “Flamenco, Flamenco“. It was shown at – surprisingly – only two cinemas in Madrid. I saw it at Cines Princesa near Plaza de España.

The theater was only about 15% full but there was a line outside, apparently to see the premier of the new Harry Potter movie.

Truly, I’d imagined a huge premier at one of Gran Vía’s big, old cinemas with Carlos Saura himself talking about the film before the screening, maybe some of the performers sitting in the front row and signing autographs afterwards, limousines, press’ flash bulbs going off left and right. Not so, all somewhat unfortunately. This is “Flamenco”, afterall, just recently designated by UNESCO as an “Intangible Cultural Heritage” of Spain.

The movie, “Flamenco, Flamenco“, is filmed entirely in the former “Pavilion of the Future” at Seville’s 1992 Expo. It’s a modern metal structure seemingly more like a flattened bubble than a warehouse but nonetheless a perfect filming environment. It’s this structure and the collection of flamenco art which you see at the beginning and again at the end of the movie. Very well produced.

So sure, I KNEW “Flamenco, Flamenco” was about flamenco but I didn’t know to what extent. I really thought it would be more documentary-ish, featuring the lives and hard work going into making great performers. But instead, interestingly, it was a string of 10(?) individual stage performances by today’s great flamenco performers as well as a number of those from years gone by.

Going in I didn’t know much about the movie but knew I wanted to see it. Having little background helps me, sometimes, enjoy movies more. There’s nothing worse than seeing all the best highlights on any film trailer and then feeling as if you’ve already seen the film when in the cinema.

Not so with “Flamenco, Flamenco“. I was truly moved during a number of the performances, particularly with the opening song “Verde, Te Quiero Verde” and later on from guitar performance by Manolo Sanlúcar. Also the music-less Saeta song by elderly María Bala, a piece filmed in very dark lighting conditions, was especially emotional.

Sara Baras dancing flamenco in the movie was a treat, but the young boy, “El Carpeta” – the future of flamenco dance, is a wonder to behold. Incredible. His performance left me shaking my head in disbelief. The youngster Rocio Molina is also an excellent dancer, somewhat of a more modern version of flamenco dance.

Paco de Lucia played guitar as only he can do, Tomatito played too, as did, as mentioned before, Manolo Sanlúcar. The latter impressed me more than Paco did – and that’s saying a lot. Miguel Poveda sang twice, once solo in homage to the past flamenco greats Lola Flores and La Paquera de Jerez and again as accompaniment to a rain-downpour-drenched stage with classical flamenco dancer Eva Yerbabuena. Another impressive dance-only piece, no music or words, was offered by Israel Galván, entitled “Silencio”. Other well-know singers such as José Mercé and Niña Pastori were included too.

It was a mix of 33% singing, 33% dancing, and 33% solo guitar playing. That adds up to 100% non-stop flamenco entertainment. Doesn’t really matter if you understand Spanish or not as most Spaniards themselves can’t understand many of the flamenco song lyrics. Besides, the music itself is worth the price of admission. Sure, the singers and guitar players were performing to “playback” (pre-recorded music) but their lip-syncing was nearly right-on.

I feel fortunate to have seen many of these greats perform live here in Madrid – with the exception of Paco de Lucía and Sara Baras as their tickets are always sold out immediately.

Also read: “Carlos Saura Premiers ‘Flamenco, Flamenco’” at Flamenco-World.com – and in English – with more photos, info, and insights from the movie.