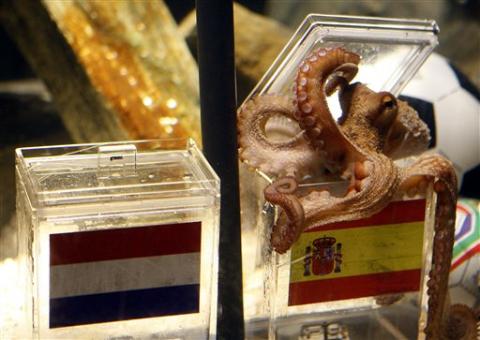 The 8-tentacled clairvoyant octopus, which correctly predicted Spain’s great victory over not only The Netherlands in The 2010 World Cup Final, but also against Germany and countless other matches, died last night of natural causes in his aquarium in Germany. Some say he may have predicted his own death. Oooooookay.

When Spain won the final, ecstatic fans in Madrid were seen waving octopus banners. The small town of Carballino in northern Spain offered a €30,000 “transfer fee” because it wants to make Paul a mascot of its food festival, a disturbing notion. (source: Spiegel Online International)

Octopus Paul was born, it is thought, in 2008 in the Atlantic Ocean. He was “extracted” off the British coastlines of Dorset. I have to wonder why he was “chosen” to survive instead of consumed like all the rest. I guess he really was special, even at his capture.  Just maybe…

The news was published today in a short article by El País, Spain’s largest newspaper. The comments associated with the article, all in Spanish, are hilarious! If you read Spanish, take a look.