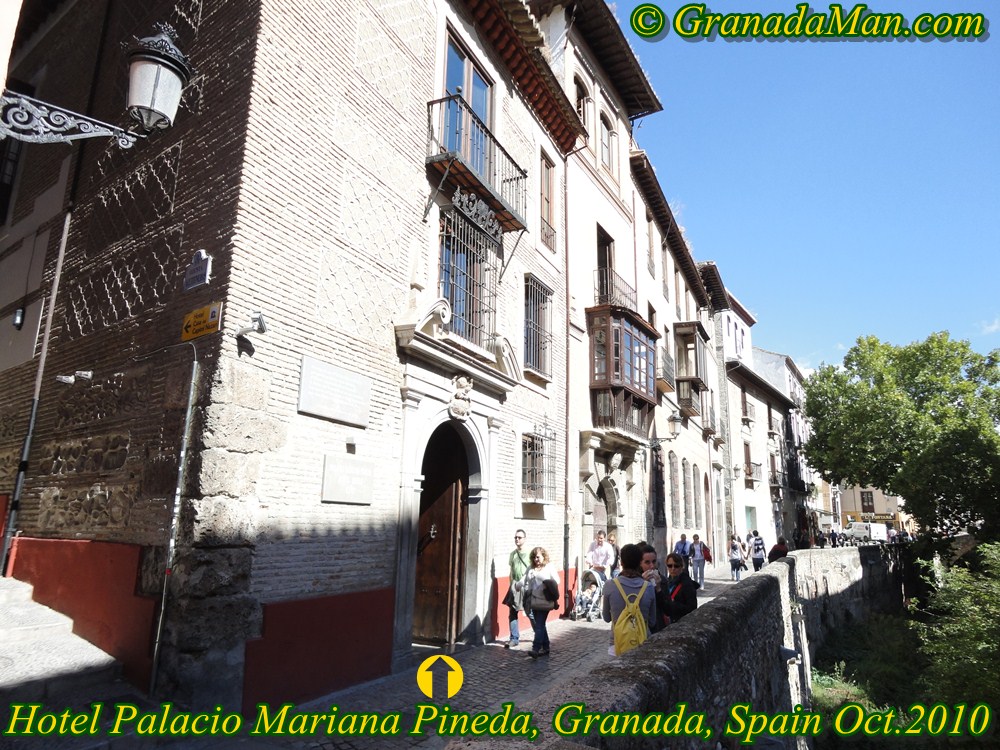 This historic, small palace was recently converted into a beautiful hotel with only 4 bedrooms – 2 of which have (easy) views of the Alhambra – as did mine 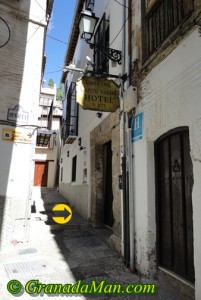 Side Entry before 10am & after 8pm, Cuesta Aceituneros

From 10am to 8pm you enter through the main door facing the busy Carrera del Darro, the main, narrow one-way street running along the river where all the buses and tourists pass. Before and after these hours you enter the hotel through the side, well-lighted side street of “Cuesta de Aceituneros” through the reception area of their sister hotel, the Hotel Casa del Capitel Nazari. This entry is a huge, old wooden door. You must first buzz the intercom, they see you through through the camera, and buzz you into the reception room of the Hotel Casa del Capitel Nazari and then walk through the halls to the other hotel.

As I said, the main street below is one way and is the nearest/easiest access to the Sacromonte and upper Albayzin. A lot (or all) of the tourist are walking this street too, where they usually have to stop, standing to one side to let cars and mini-buses pass by. Oftentimes pedestrians will stop to enter the hotel just to marvel at its open air patio with fountain.

The hotel(s) offer a free coffee/tea time from 4-7pm including pastries in the patios of the connected/adjacent sister-hotel. Breakfast is 8 Euros – but we never ate there (served until 10:30am). We did spend one coffee/tea break in the main patio of the other hotel during a rain storm which was quite nice, as they pull over the white awning, closing the gap at the top. We could hear the rain perfectly and it smelled wonderful. Both hotels have free Wi-Fi, which is a plus, and also offer laptops (they only have 1) to guests when its available. I used it three time without problem. You must return your room key upon leaving the premises.

This hotel has only 4 rooms; 2 with views of the Alhambra and 2 without. We decided to pay more for the views seen from the bedroom window. The view was “easy”, no twisting of the neck to see the Alhambra. In fact, it was easily seen both at day and at night while lying in bed. Very nice looking up at the illuminated Alhambra at night, too. 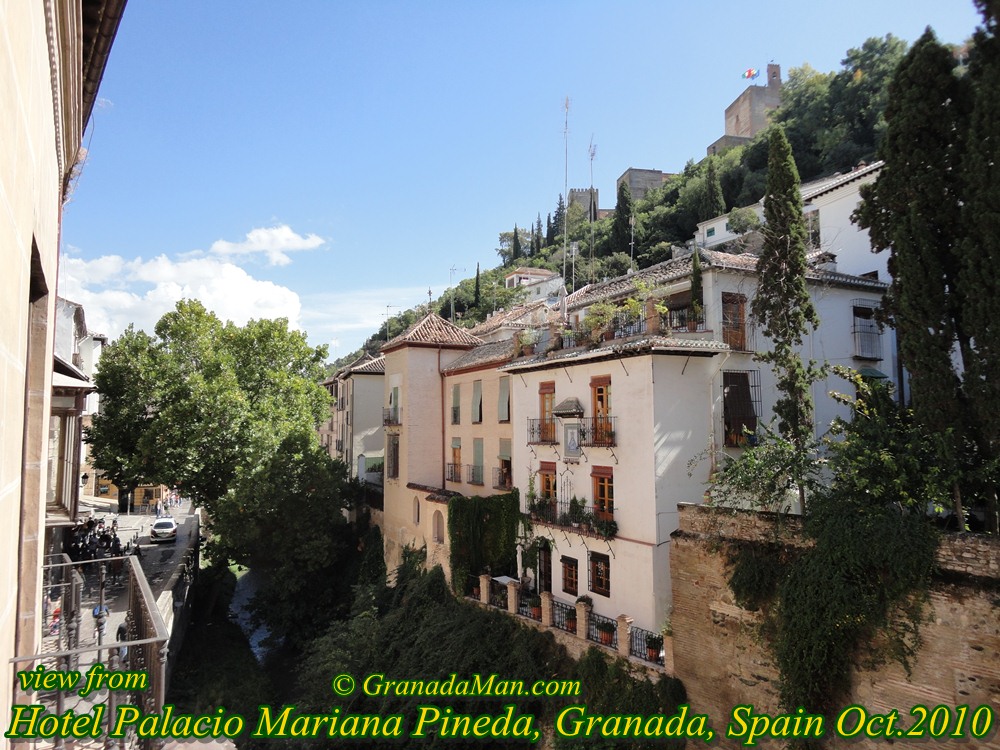 I was a little worried about having a hotel room facing the busy Carrera del Darro street but the double-pane windows helped a lot and, after midnight or so, after the buses stopped, you barely noticed the pedestrians down below.

To reach our room, number 304, we had to walk up a set of steep (and tall) stone steps so this climb is not for the weak or disabled. Upon reaching the landing, our room was to the left. Upon entering you’re in a long hall, all for you. At the left end you have the huge bathroom with large jacuzzi bath and wide sink. Also has a toilet and bidet. All the plumbing fixtures were brushed bronze in color. The shower head was one you have to hold in your hand as there’s no hook onto which to affix the shower head in order to stand under it. Also, the jacuzzi is not enclosed except for a small glass panel to one side (the wall’s on the other side and the front is totally open). For this reason, without a little care, it’s easy to spray the bathroom floor with while showering. I’m a little tall so I stretched the tubing to its maximum length to hold the shower head over me so I could wash my hair. This was a minor issue, however. They offer a basket filled with soaps, shampoos, toothbrush/paste kit, shaving kit, combs, the works. 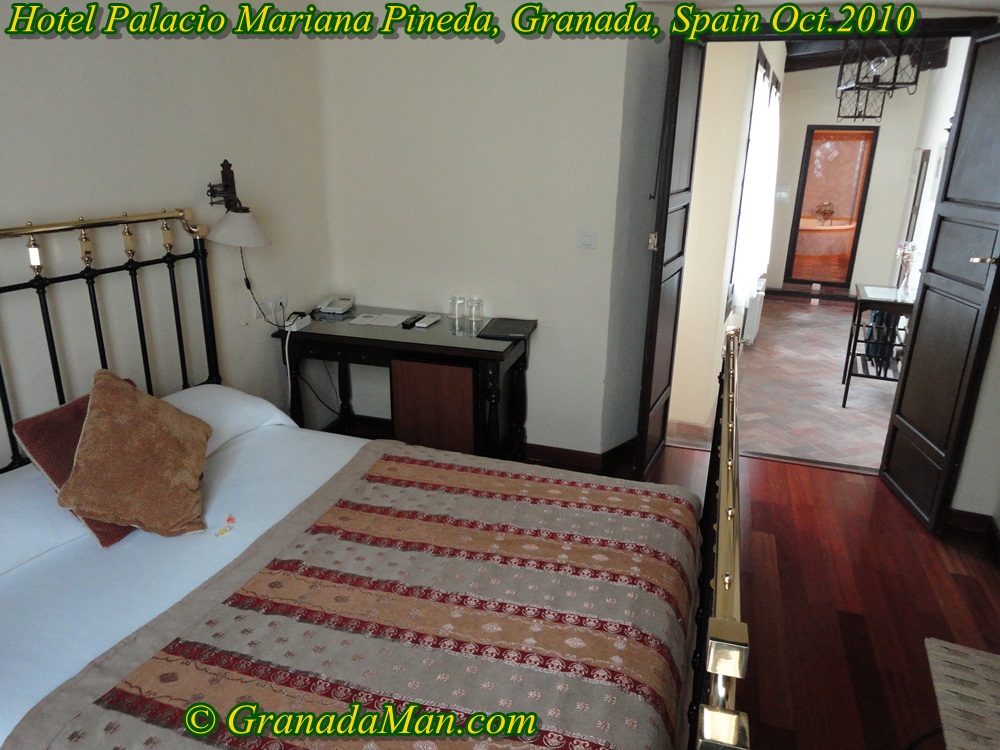 On the other end of the hall, just before reaching the bedroom, is another small hall with a large wooden closet. These two halls are lined on one side with windows looking down over the hotel’s central, open air patio but the windows have white curtains for privacy. 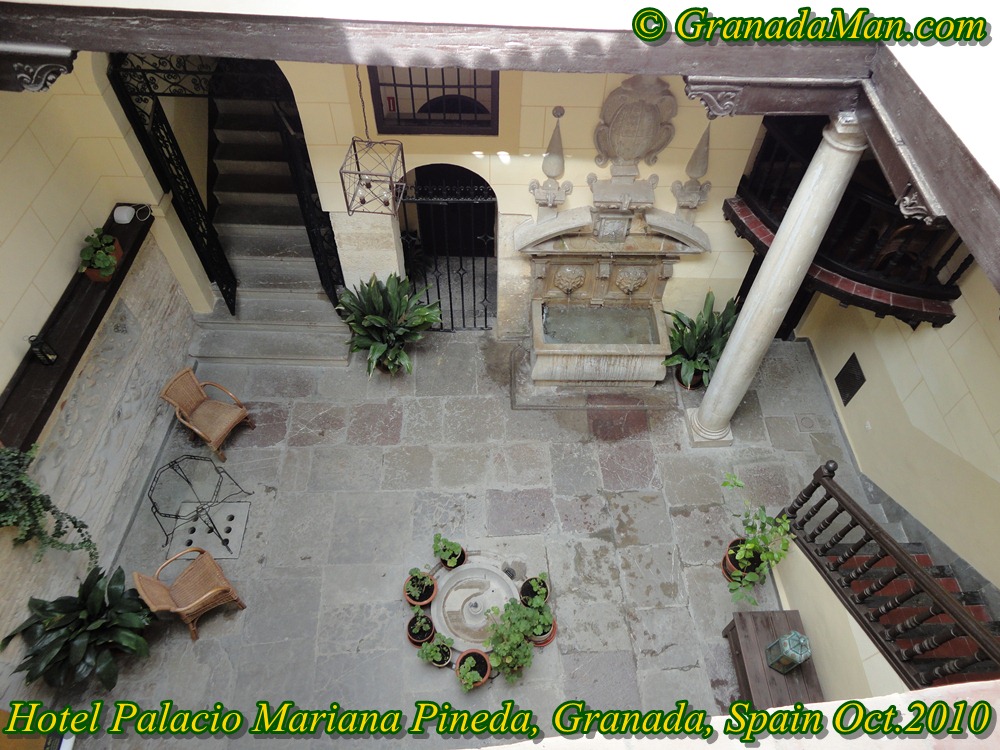 The bedroom is up two steps and is of average size, really. The bed was queen size and comfortable, flat panel wall-mounted TV with 35 channels including a few in English. Mini-bar, 2 bedside tables over which there’s an individual wall-mounted reading lamp. The ceiling was HIGH – can’t even calculate, probably 15 feet high at least and with bare wooden beams. There’s no desk and only one chair in the corner. They also boast internet use through the TV when using a keyboard given from the reception desk, but they said it didn’t work very well, didn’t have a fast connection, and just better to use the laptop they provided.

The hotel does not have a restaurant but does have a breakfast room as well as the aforementioned patio(s) on which to drink free tea/coffee from 4-7pm. Guests can also visit the downstairs, brick-lined wine cellar (minus the wine), which is quite interesting.

The location is good and near the Plaza Nueva/Plaza Santa Ana as well as the beautifully terraza-lined Paseo de los Tristes (which is the same road/extension to the Carrera del Darro) where you can have breakfast, lunch and dinner with just beautiful views of the Alhambra looming above. We had breakfasts here two days, toast with olive oil and tomato sauce with coffee for 7€ at one terraza and 7.40€ at another. Sitting under the late morning sun (in October) looking up at the Alhambra was such a peaceful experience. Keep in mind that they don’t typically open these terrazas in the morning until the sun is striking them. The second day we went out earlier, 9am, and had to wait until 10am for them to set up the terraza’s tables and chairs to have breakfast.

In all, I can recommend this hotel. 170 Euros per night for a double room with Alhambra views in a 4-star hotel does sound like a lot but you pay for these little, charming pluses. If you want a romantic, historic hotel you can’t do too much better.