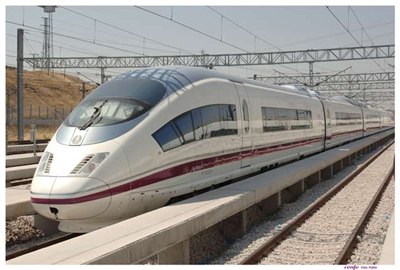 The high-speed AVE train between Madrid and Barcelona opened in 2008 and has been making travel between the two Spanish giant cities fast-and-easy ever since, creating real competition with the airlines. Or has it?

Not so long ago, the trip between Barcelona and Madrid would make any traveler cringe with the thought of a slow, 8-hour ride trip with the countryside going by at a not-so-fast rate. It was cheaper to go by train then, however. Now you have no choice for the train; it’s the AVE or nothing. They don’t even have the slow, overnight train anymore. OCT.2010 UPDATE: Now there is slow, overnight train between Madrid and Barcelona which lasts 9 hours. There’s also a multi-stop, slower afternoon train which takes almost as long. Logically, these two slower trains cost less, but in many cases they don’t cost much less if you secure the “WEB” prices for fast AVE trains online.

With faster service you also get higher prices – unless you plan your trip one month or more ahead of time. The RENFE website, although a bit difficult to maneuver through the steps, does eventually reveal a myriad of daily departures, pricing schemes, and 3 classes of tickets.

Last month, when I first started scanning plane and train prices for my trip to Barcelona later this month for the Alimentaria Barcelona 2010 Food and Beverage Exhibition, I found good prices all around – with airplane fares cheaper than the train.

Until just a week ago I was sure I’d be flying on Spanair as they had round-trip airfare of 88 Euros total, no extra charge for checking one one suitcase and one carry-on bag. Even better was the flight takes only 1 hour 20 minutes. Can you beat that? And they have flights from Madrid to Barcelona every 1.5 hours out of Barajas Madrid Airport. That’s a great deal.

Sure, I realize it would take me 1 hour to get to Madrid Barajas Airport by metro, then another 1-2 hours waiting in line or waiting for plane departure, then, undoubtedly another 1.5 hours to recover my checked bag and get transportation from El Prat-Barcelona Airport to my Barcelona Hostel. All totaled, and estimated travel time from door-to-door of about 5.5 hours. But it just SEEMS so much faster, doesn’t it? Afterall, you’re only traveling for 80 minutes in the air!

Now the train. My round-trip ticket from Madrid to Barcelona on the AVE train cost about 165 Euros all totaled. They don’t charge extra for baggage, either. It takes me maybe about 45 minutes by bus (waiting for bus to arrive, changing buses once) to get to Atocha train station in Madrid. And the great thing about the train is you only have to arrive a couple minutes early to get on. The security line is always fast and the lines are generally short as it takes so little time to pass through. The trip itself takes just under 3 hours. Mine is not a “direct” route so I guess it makes at least one stop along the way. The direct AVE trains from Madrid to Barcelona are approximately 10 minutes faster and the tickets are significantly more expensive. Not worth it. Upon arriving to the downtown SANTS train station, I only have to get off the train and go directly to the SANTS metro station, traveling maybe 20 minutes to the Plaça de Catalunya. 20 minutes later I’m at my first hostal (of 3 during my stay). Total door-to-door travel time: less than 5 hours.

So the question now is, WHY am I taking the train if it’s ONLY 30 minutes faster total and costs twice as much as the airplane? This is a good question. I guess you could call it “The Comfort Factor”.

Taking the plane is cheaper, that’s true, but the travel from home to the airport via metro takes one hour, potentially all spent standing, not to mention changing metro trains twice, going up and down some steps with my luggage. Then upon arriving at Madrid Barajas you have to wait in line to check your luggage, then wait some more in the security line. ONLY THEN do you get to sit down before your flight leaves – unless you want to do some shopping.

It’s much more comfortable taking 2 Madrid city buses over 45 minutes, likely sitting the entire time, and then sitting for the 3-hour train ride to Barcelona. And, you can’t beat the views from the train. Sure, it’s a bullet train so everything whizzes by so fast your brain can’t register what it was you just passed at, what, 350 kilometers per hour (218mph), although I doubt we actually reach those “potential” speeds. “They say” the AVE ride between Madrid and Barcelona is very smooth. I’ll be the judge of that.

As mentioned before, AVE ticket prices can be quite good – VERY GOOD, in fact – if bought more than 1 month in advance – and when bought online at RENFE.es. When I first started looking I was finding round-trip prices around 100 Euros. Prices go up with availability issues as time draws nearer to the departure date.

Turns out, totally by chance, that I ended up getting a CLUB CLASS ticket for the leg from Madrid to Barcelona and Tourist Class for the return route. There are three classes on AVE trains, listed from low-to-high: Turista, Preferente, and CLUB class. I doubt I need to translate those three for you. The discounted Turista class tickets almost always get sold out first as they’re the cheapest. But as I bought my tickets just 2 days ago there weren’t any tourist class tickets left at discounted rates for the hour I wanted to leave. Now, those retail tickets go for 114 Euros. My club class ticket from Madrid to Barcelona direction cost 123 Euros. There was a tourist class ticket for 113 but I decided to “splurge” and get more comfort. In club class you have a 2-by-2 seat configuration, wider seats, no-doubt leather, more leg-room, and free breakfast. (free breakfast is also given in Preferente Class)

The ticket for the return trip from Barcelona to Madrid was much cheaper, costing only 46 Euros, also a 2-by-2 seat configuration, no free meals or other goodies. They do give you free headphones to watch the movie – if they even have a movie on the less-than-3-hour train ride, that is.

So I’m traveling to Barcelona like a King and returning to Madrid like a pauper. It’ll be interesting to compare and contrast the two classes – which I’ll do on my BarcelonaMan Barcelona Blog. It’s also there at BarcelonaMan.com, not here, where I’ll be detailing my daily activities in Barcelona so keep that in mind if you’d like to follow along.