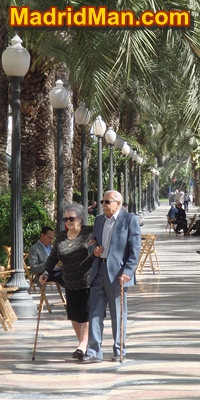 The old phrase holds true, “God love ’em.” And I do too, that’s the fact, so my patience-level is generally high when I encounter them on the sidewalks and standing in lines. There’s no denying it, old people walk slow. But then again, they’re never in a hurry, either.

Here in Spain you can’t help but notice the quantity of octogenarians walking the streets, playing cards in bars, going shopping and out-in-the-public. This sharply contrasts to the older folk in the United States where older people, and many others, 1) live in houses outside of the downtown, and 2) don’t leave home as often because to do so they’d have to drive – and maybe they can’t/shouldn’t.

One has to wonder about the attitude of older people when mixing with the general (younger) population. Do they think, “I’ve worked hard and paid my dues to society so everyone else can kiss my arse.” Or do they simply not realize they walk slow? Sure, even if they wanted to walk faster many cannot. Not to mention the dying custom of taking strolls for pleasure. NO ONE does this anymore except for the old timers who have the freedom to do it.

How many times have I been walking down the middle of my neighborhood’s narrow sidewalk only to encounter a slow-strolling old man or woman, using a cane at approximately one foot to the left or right of their body, and causing me to either walk out into the street to pass them or to “whoosh” by them when there’s a garage entry? And when you do pass them they’re sometimes 1) startled or 2) angrily look at you with a “How dare you. I own this sidewalk” expression. And if two of them are walking to the market, side by side or arm-in-arm, you can just forget it, might as well cross the street and get on with your own life because you’re not going pass them anytime soon.

But you really do have to love and respect them. They have worked hard all their lives, growing up, surviving, and persevering through Spain’s darkest decades. Many of them are so charming, affectionate, and truly enjoy their golden years. Sure, some are crotchety old geezers whom find no good remaining in this world. But many many others are so happy to be retired, to do what they want – when they want, and have a kind word, conversation, or a kiss for anyone willing to take the time to be with them.

Oftentimes the highlight of their day is going to the local bar for a coffee or do the shopping. Men go to play cards with other men. Women meet other women for merienda to chat and gossip. And they all love encountering neighbors or old friends in the street for an extended chat about the weather and discussing the pills they’re taking for their latest pains.

Doctors’ visits for them, as frequently as they go, is another highlight. Whenever I’m there for mine I’m always surrounded by them, all chatting amongst themselves, eavesdropping on other conversations and commenting about them with the older stranger sitting next to them.

Last week I had a doctor’s appointment. While waiting, one old lady received a cellphone call. She took it out, fiddled with the buttons, and answered it. She loudly spoke to the person calling about another doctor’s appointment she had at some other location, repeating the date and hour out loud. When she hung up, she said, “Oh my, what day and time did they tell me I had the appointment?” And with that at least 10 (older) people spoke up to confirm the date/hour she had vocalized. Not surprisingly, many among them auditorily-challenged, conflicted in their account and began to debate, almost argue about what they believed they heard. The woman receiving the call, now frustrated, said she would call back later to confirm the appointment.

The above is really neither here nor there. In the one-block near any health-center, you can always calculate there to be a higher percentage of old people to young people. Sure, older folk need more care and have more health issues, I understand that. Or maybe it just appears that way as young people tend to “get out” of the area a lot faster than older people. Nah. It’s the former.

How many times have I respectfully allowed a old woman or man to get on the bus ahead of me when I was at the bus stop first? Many. Fine. That’s the least we kids can do. Afterall, they remind us of our grandparents. But after they run their monthly BONO ticket through the machine they stand there in the aisle, just inside the bus’ entrance, carefully re-turning their ticket to its special BONO-bus ticket carrier. Meanwhile, I and a half-dozen other people are standing behind him/her, waiting for her to finish and choose a seat to sit down. Keep in mind there’s no space to pass by – although more and more youngsters shove their way through with not so much as a “pardon me” or ask permission to pass through. Kids, these days. (now it’s me who sounds like an old man)

Once a week at 6pm I take an 83 year old woman to have merienda at the local bar. We spend a casual hour chit-chatting about her day at the senior citizens center or, sometimes, she asks what I’ve been up to. After that I accompany her to her home, climb up 4 flights of stairs, unlock her door and turn on the heat, replace any light bulbs, listen to answering machine messages, open/close her windows, and do whatever else she needs. I’m certain it’s the highlight of her week. While we’re walking to/from the bar she walks very very slowly, stopping every 20 or 30 meters to either tell me something, oftentimes as people are waiting behind us to pass, but otherwise with her head down, examining the sidewalk for cracks, dog crap, or holes which may complicate her passage. She does all this while holding onto my arm, which is sweet and I love it, but she always steers me into building corners or oncoming pedestrian traffic. She’s none-the-wiser but I like her just the same. The truth is, I speak more Spanish with her than anyone else in Spain as I call her daily on the phone too.

Old people walk slow. So what. What’re you gonna do? Just make the best of it. Many of us will be the same way someday. Besides, it’s not their speed which makes them who they are. For that, you have to go deeper than physical attributes and abilities. And when you learn the often colorful life they’ve led you can’t help but be amazed and respect them even more.