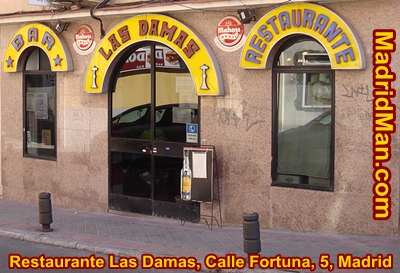 I’m a little sad. Today is their last day. My favorite neighborhood bar, Restaurante Las Damas on Calle Fortuna, 5, in Madrid, the one where I have lunch once a week, has sold to foreigners. WHY to foreigners? Because the bar’s owners have been wanting to retire for years and, until now, there have been no buyers in these difficult economic times.

I’ve only been going since discovering it just one year ago but it has become like my home away from home, where every time I walk through the door María and Daniel look up from what they’re doing, smile widely, and greet me warmly as if I’m their son coming home from college – albeit without the hug.

So after 32 years of serving weekday breakfasts, lunches, and tapas until 6pm in this humble, blue-collar neighborhood, the married couple, both in their 60s, have sold their businesses and will soon be enjoying retirement away from the bar. They won’t be going TOO far away, however, because they live in the same streets as the bar and have no plans to move to “el pueblo” to live out their “Golden Years”.

Fewer and fewer Spaniards are taking on jobs as new bar and restaurant owners or even workers, not to mention stores of any kind. This is true particularly in working class neighborhoods where the numbers of
foreigners is beginning to overcome the number of Spaniards. Spaniards are more frequently moving to the suburbs and villages outside of the City of Madrid.

Who are the new owners of Restaurante Las Damas? They’re a pair of men originating from Ecuador, one of which has been working off and on in the restaurant’s kitchen for the past 20 years, I was told by María just yesterday as we were chatting about the future of the bar, possibly trying to calm my nerves about HOW the bar may change. And change it will, she said, but the food won’t.

The bar-restaurant will close for a short period of time in order to make renovations and modernizations. This, deep in my heart, is both good and bad to me. One of the grandest elements of this place is its kitsch-ness, hole-in-the-wall charm with worn floor tiles, poorly hung pieces of “art” on its walls, outdated toilets, and hand-written menus stuck in plastic sleeves.

At least as long as I’ve been going, without fail, I always see the same people day after day, everyone usually seated at the same tables. I usually only go on Thursdays but have visited on other days of the week as well. The clients are like family to María, the short, stout, and “blond” waitress/wife, who is the friendliest waitress I’ve ever encountered. She takes and brings the orders, makes commentary about the food (although everyone seems to know the multi-item daily menus by heart), asks about family, and chats about current events.

The lunch regulars include a table of two old ladies, one of whom proudly wears her dated and somewhat disheveled fur coat on winter days. Her companion, equally as old, seems to suffer from Parkinson’s disease but her quivering voice doesn’t force her to quiet its loudness – I can hear every word from 5 tables away. It was this same woman whom just yesterday spilled some water on the floor, got up and went to the bathroom, and returned with the mop to clean it up. Everyone joked about how she should be paid for “working” or at least get a free meal and she simply said, “No pasa nada“, “No big deal.“

Another couple of men, also both retired, meet there every day and chat about politics, a little about sports, and whatever’s going on in the world. They sit at the table next to me and I sometimes like to eavesdrop on their opinions of American politics.

There are more regulars, somewhat less colorful, but include a couple mechanics, some kind of middle-aged office worker, and a old man which does nothing more than occupy one of the eight tables with his glass of water in a beer mug. He likes to talk a lot with the other tables. I always sit at the same table, near the entrance to the bar section as the “comedor” (dining room) is in the back of the bar-restaurant. Upon entering and leaving, everyone greets everyone else with a smile and a “Buenas tardes. Que aproveche,” which means, “Good afternoon. Enjoy your meal.” Isn’t that nice?!?! We don’t have such a friendly custom in the USA. Too bad.

Daniel Gil, owner with his wife-waitress María, is also the cook and works behind the bar. He’s of average height and weight, bald, and has a genuine human quality about him, not worn-out or overworked as are lot of people his age in the restaurant business. I guess some people are just like that inherently. He always has a kind word and a smile, taking a moment to chat as you pay, never rushed, never distracted by the bar’s activity to be “with you” for those 45 seconds. That means a lot to customers.

María was telling me yesterday about the interview done and subsequent article written about the bar by El Mundo newspaper (see photo/article below) in 2008. TeleMadrid saw the article and came to interview them on television too. They were so proud – and have reason to be.

Restaurante-Bar Las Damas has the best and the cheapest “Menú del Día”, just 6 Euros for the complete meal of the first course, second course, side salad, bread, red table wine and accompanying carbonated Casera water, seasonal fruit and home made desserts, and coffee at the end. How do they do it???!! ONLY 6 Euros! I know I sound cheap but when you weigh the quality-price ratio you really cannot beat that.

Every day the “Menú del Día” varies but you find the same “standards” throughout the week. There are typically 6 items to choose from for the first course and 6 for the second course but these items change from day to day. For example, paella is always served as one of the available first course items on Thursdays. They have light meal selections as well as “hungry man” meal selections. I most often choose their “Sopa Castellana” (hot bread soup with egg) for the first course and, yes, most often, something “manly” for the second course. Yesterday I had the steak and potatoes with grilled green peppers but today for the second course I ordered the 2 fried eggs, fried potatoes, and grilled green peppers with 6 “croquetas de jamón“. Mmm.. Mmm… MMMM!!! Good Gravy!! Man-oh-man do you eat well there WITHOUT FAIL.

Their statement has always been, “Comida Casera de Mercado” which means, “Homemade food from the market.” What market, you ask? The Mercado Jesuitas, just around the corner from the bar. The meats, fish, eggs, fruits, and nearly everything is bought at the market.

Again, the food is top quality, or at least the top quality available from the working-class neighborhood’s market which, I’d guess, is typical/average quality. Daniel, the cook, really is a master at cooking the basics, always nicely salted (but not over-salted) are those delicious fried potatoes, steaks, and grilled chicken. Really, it’s like eating at your grandmother’s house in Kentucky (or Southern Ohio in my case). And the desserts are always homemade too. My favorite is the “pudín” – which is nothing like “pudding”, but more like a pie. Theirs has a healthy dose of orange-peel with a coffee flavor. To look behind the curtain to the broom-closet-sized kitchen (see photo of Daniel cooking in article below) you’d wonder how anyone could cook for more than one person, let alone for 8 tables!, but Daniel does it masterfully. Or rather, he DID IT masterfully – since today’s his last day.

I’m tempted to simply end this article here, leaving “the old” behind, carefully encapsulated in the blog’s archive and not taint it with “the new” of what-will-be after the new owners take over and change things. Suffice it to say that Juan Carlos, the new owner from Ecuador, the one who has been making much the food I’ve been eating (when Daniel’s not available) , assures me that the prices will not change, nor will the food. They will, however, modernize the place a bit, stay open evenings and weekends, and put up a big-screen TV in the dining room (oh, gawd) for when there are fútbol games to be watched. I just hope it’s not turned on during the lunch hour but I suspect it will. Juan Carlos, the new proud owner, seems to be quite careful and mindful of the fragile clientèle which has been built up by Daniel and María over the years. The last thing you want to do is disenchant the regulars.

But it’s hard to believe the new owners can be as charming as Daniel and María. With them, you always felt like you were at home eating Mom’s home cooking – although it was really Dad in the kitchen.

Isn’t it silly that right now, after writing and re-reading this previous paragraph, I suddenly find myself emotional? I guess because I feel I’ve lost part of my family.

Upon paying the 6 Euros at the bar, I announced that today there would be no 1 Euro tip – as I’ve made a habit of doing. I told both María (who was waiting for the next order) and Daniel (who was cooking just behind the curtain) that today, instead, I brought them a gift. Leaning down, I whispered to María that it was a bottle of champagne to help them celebrate their retirement. At that moment I was sure María was going to cry – but she didn’t, thankfully, because I may have broken out as well. She instead spread her arms, put her hands around my head, and kissed me tenderly on the left cheek, and then on the right, thanking me for the gift. I thanked them for all the wonderful meals, the good prices, and the friendly service.

Saying goodbye was sad and I didn’t get the chance to shake Daniel’s hand as he was busy cooking. Instead, I wished them well and turned to leave, pulling the door open and shouted an “¡Hasta luego! ¡Nos Vemos!” with a smile to the new owner, Juan Carlos. He returned the gesture, surely wondering if he’d ever see me again.

Walking out onto the street I felt odd and a little emotional, like something was missing. Something was already very different in my little world.

Previous Blog Entries about my meal experiences at Restaurante Las Damas include (although I’d changed he names to protect the innocent):

The below photo and article, published by El Mundo newspaper October 17th, 2008, can be viewed in its larger (2.2mb), more legible size (in Spanish) HERE. 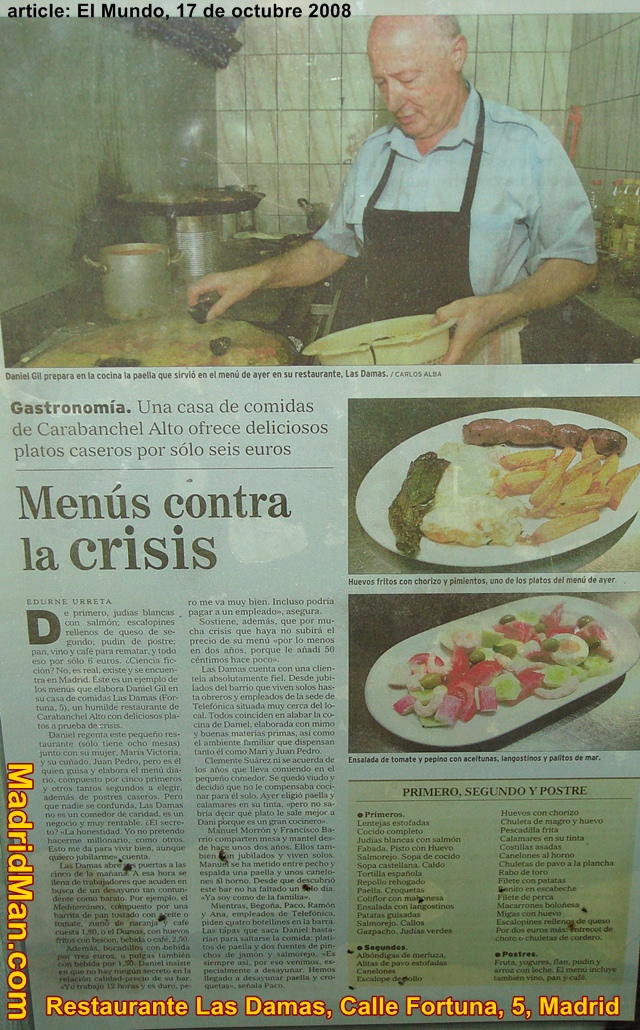 Thank you, María and Daniel! You will be missed.