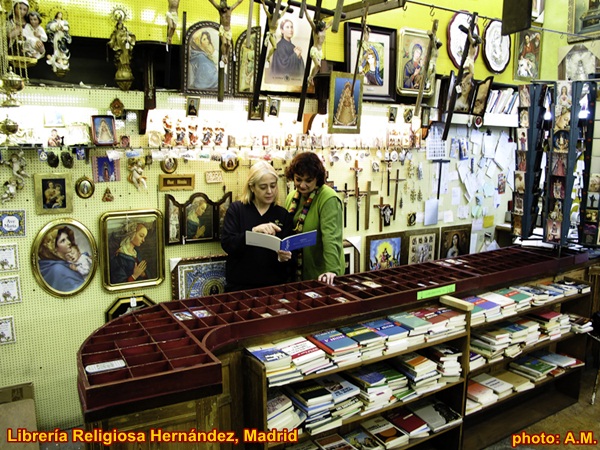 Librería Hernández Religious Bookstore in Madrid will close this year after 158 years of service. Incredible, isn’t it, that any business, let alone a RELIGIOUS bookstore, could survive so long. Religious stores, at least for me, have always been a curiosity which I’ve always associated with Spain as well as Italy since we don’t have them – to my knowledge – in Ohio, USA. 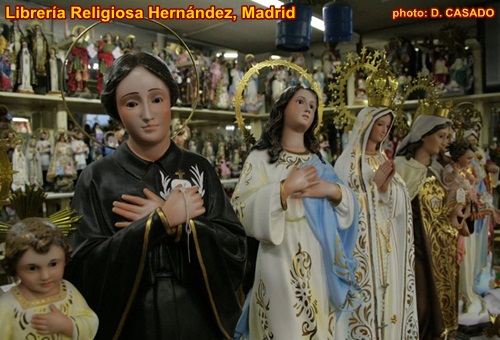 Upon visiting Madrid the first time in 1995 and in subsequent strolls through Madrid’s downtown, these religious stores always turn up, causing me to ask myself, “How can these places stay in business? Do they receive some funding from the church?” I doubt the latter but where else in the world is – read: “was” – religion so profound in the makeup and history of the culture?

Upon entering nearly any older-person’s house in Spain you’ll usually find the following: a wall-mounted crucifix, a painting/portrait of Jesus Christ on the cross, and oftentimes other ceramic angelic figurines. You don’t find these religious items so openly displayed in younger peoples’ homes although they may be religious.

Religion in Spain, according to WikiPedia:

Roman Catholicism has long been the main religion of Spain, though it no longer has official status. According to a July 2009 study by the Spanish Center of Sociological Research about 76% of Spaniards self-identify as Catholics, 2% other faith, and about 20% identify with no religion. Most Spaniards do not participate regularly in religious services. This same study shows that of the Spaniards who identify themselves as religious, 58% hardly ever or never go to church, 17% go to church some times a year, 9% some time per month and 15% every Sunday or multiple times per week.
But according to a December 2006 study, 48% of the population declared a belief in a supreme being, while 41% described themselves as atheist or agnostic. Altogether, about 22% of the entire Spanish population attends religious services at least once per month. Though Spanish society has become considerably more secular in recent decades, the influx of Latin American immigrants, who tend to be strong Catholic practitioners, has helped the Catholic Church to recover.

But lack in interest is not the reason, nor the world economic crisis, for closing the historical religious bookstore which has spanned 4 generations. The reason is clear and all too common in longtime family businesses; the children no longer want to keep it going. Librería Religiosa Hernández is attempting to sell or rent the shop but as the service and items sold is so specific, detailed, personalized, and studied, there’s little realistic hope it can stay open as it is. It’s not simply the sale of religious items, either. Certified artisans work for the shop, creating and painting dolls and portraits, among many others things. 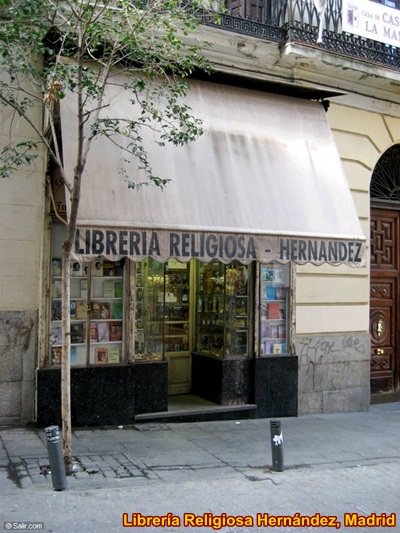 I’ve walked past this shop several times as it is just off Madrid’s Puerta del Sol, nearly across from the also-now-closed Teatro Albéniz on the Calle de la Paz, 4. When tourists stray from the Puerta del Sol to explore Madrid’s quaint, narrow streets, they’d inevitably pass this old book store and pause to examine the window dressing of cherubs, baby Jesus dolls and statues, books, and crucifixes. But while this historic Madrid bookstore closes, others remain open and can be found throughout the city, but undoubtedly their numbers will dwindle with time.

If you have an opportunity to visit the Librería Religiosa Hernández, do so quickly, at least before May, to see what a 158 year old shop looks like.

Share THIS on Facebook!
This entry was posted in General, Money and tagged Bookstore, centenario, closing, libreria, Madrid, religous bookstore. Bookmark the permalink.