On Friday, 11 December 2009, I attended the day-long Madrid Travelthink 2009 conference in one of the upstairs theater rooms at the Reina Sofia Museum, across from Madrid’s Atocha train station. The new addition to old museum is very nice, modern, and the outward portions are full of light via its glass & steel exterior.

Madrid Travelthink is an annual conference, its third, to help educate travel professionals in how to better promote Madrid as a tourism destination using, mainly, the Internet and all that which is now available to “get the word out”. Google Spain, esMadrid, and the City of Madrid sponsored the event.

Last year I wrote a somewhat steamy blog entry about Madrid Travelthink 2008 event entitled, “Conference: Time of Crisis in the Tourism Sector“. There, I detailed the aim of the conference while obviously upset that the organizers, the City of Madrid, would dare charge 75 Euros to those wanting to learn how to better promote it. Sure, they included a large meal, coffee breaks with snacks, and who-knows-what treasures in their “goody bag” to those attending. But come on. That’s just wrong. I registered but never attended & didn’t pay the 75 Euros. I even wrote a detailed comment on their website, in Spanish, that it should be open to the public as well as be broadcast live on the Internet. Afterall, we whom promote Madrid are doing THE CITY a favor, not the other way around. We travel professionals take a small percentage of that which is gained in tourism Euros and the rest goes to city businesses. Madrid should be sending us Christmas baskets, for crying out loud.
<end rant> 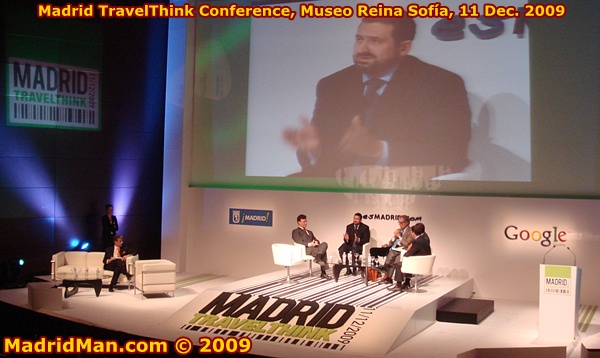 This year, smartly, they charged nothing to the approximately 440 people whom were lucky enough to get passes to the quickly “sold-out” event – although about half the seats were empty. And also, wonderfully and for the first time, they offered the event to the public via live Internet broadcast through their website. Unfortunately, it seems they haven’t (yet?) posted videos. Comparing this year’s Madrid Travelthink to last year’s, it seems this year’s was a greatly scaled-back conference in a smaller venue, maybe for the economic crisis or maybe because of demand. Who knows.

It is my presumption that Madrid Travelthink is aimed mainly towards traditional travel agents and not those already using the Internet to any great degree. I say this because everything discussed as useful promotional tools (i.e. Facebook, Twitter, YouTube, Google AdWords) were already known & utilized by me. No secrets were divulged by the success-story speakers of TripAdvisor, Google/YouTube, Air Berlin & Vueling whom all mainly shared their business models & showed corporate growth charts. I was hoping for more details about web design, visitor demographics, and maybe some other insightful, cutting-edge nuggets of tourism gold. If only there existed something for those of us in “The Next Stage” of tourism, for those of us further along.

Many of you will read the above paragraph and say, “But MadridMan! If you’re already doing all of the above, why aren’t you even one-millionth as successful as those companies you mention above?” That’s a fair question. The only answer I can give is that, by contrast, MadridMan is a one-man-show and doesn’t have a staff of ten thousand or even five hundred as do those corporations. I do what I can as time allows it.

I was very impressed with the efforts made to make the conference very “technological“, passing out headphones for translated versions, remote control voting devices, big-screen projection, and a nice split-stage setting with a common seating area, interview area, and podium. All very nice. Oddly though, at least one or two of the heads in the common seating area (see photo above) were only visible from the back while they were discussing topics among themselves. Unfortunately for the translating device they only worked for English portions translated into Spanish and not for Spanish portions translated into English so I never used mine. As for the remote control voting devices for polling the audience, these were cool for real-time voting but didn’t work for the second session and these devices were constantly being dropped with an loud, interruptive “THONK!” at least 30 times during the before-lunch break at 2:30pm. And many times the microphones didn’t work or were under-volumed, causing the audience to shout, “We can hear you!“

I was, however, impressed with the people in attendance! Wow. At least 90% of the men were in suits and ties. The women were stylishly & professionally dressed. There were also a small few, like me, casually dressed in jeans, button-down shirt, and old leather shoes. Only the camera and audio guys were dressed worse than me. Men-to-women ratio was about 50/50 and the average age may have been about 45 years old.

To sum-up, Madrid Travelthink is a useful conference to answer questions, address doubts, educate traditional travel professionals, and to confirm the importance of the Internet to convey information to the public. The book they gave us about the history of Gran Vía during the years of 1910-1935 is very interesting.

Perhaps I seem to be too harsh on Madrid TravelThink but I don’t mean to be. One should always express the positives while carefully mentioning the negatives without appearing critical. It’s just that we all have different expectations & view things from different perspectives. Surely many of those in attendance were better educated with every breath. I’m looking forward to the possibility of a “next level” of travel & tourism promotion.