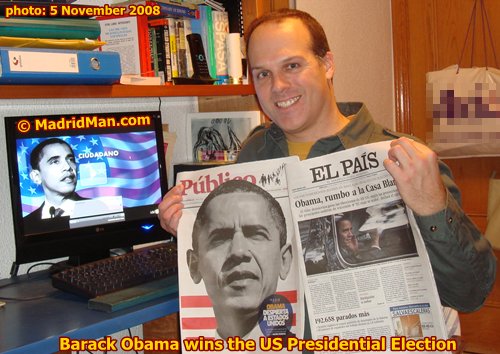 What does this posting have to do with Spain? Answer: A LOT!

I woke up today at 3pm after staying up ALL NIGHT, until 8am, watching the Presidential Election coverage over a myriad of USA, Spanish, British, and several other international television stations.

In Madrid, John McCain supporters gathered in the Hard Rock Café while Barack Obama supporters waited in long lines to enter the Circulo de Bellas Artes, all to enjoy a long night of back-slapping, wishful drinking, and hand-shaking. One group went away this morning not only tired but disappointed, no doubt.

Spain’s very conservative, rather right-wing newspaper ABC headlines today with “EL CAMBIO HA LLEGADO” (“Change Has Arrived”). It seems even the conservative party in Spain is happy with the choice of the only-slightly-left-of-center Democratic Presidential selection. On the front page of their website they show a truly inspirational video of Barack Obama (get your tissues ready) announcing “El Cambiado ha Llegado” (“Change Has Come”). And while it’s not totally clear, it seems this 2:45 video was created by ABC themselves. See the video below (hope it loads):

Not to be outdone, Spain’s left-wing, socialist party newspaper El País ALSO reports the exact same headline, “El Cambio ha Llegado” (“Change has Come”), ALSO posting a video – albeit much much less inspirational – a reproduction of the CNN+ Spain report (17 minutes) of Barack Obama’s election night victory speech in Chicago and translated by a CNN+ person.

While EVERYONE in Spain and Europe (etcetera) would be happy for whatever Presidential change in the United States of America, it seems people are particularly happy with the choice made in Barack Obama.

Now the hard part; putting action to the inspirational words.