Madrid Friends are the Best!

Sometimes it’s like that. Get-togethers with friends can be fine, good,
or leave you feeling really really fortunate to know such wonderful
people. (of course drinking lots of good beer helps too)

Yesterday, we had another Movie with MadridMan gathering as discussed on the message board. We went to see “La Jungla 4.0“, or “Die Hard 4.0“, or “Live Free or Die Hard”
as it was named in the USA. Wow. What a movie. I REALLY enjoyed it –
lots of rather unbelievable action as is the recipe for Hollywood
movies of this type. It was MUCH better than “Die Hard 3“. Bruce Willis can STILL be an action hero, I say.

Anyway, message board members Jamongris, Valenciano_en_Madrid, & I met at the Cine Ideal where they show (mainly) American movies in Versión Original
with subtitles in Spanish. Got our tickets and chose middle-center
seats in the theater which, by movie’s start, housed about 10 person
for the 4:30pm movie. I was NEVER bored during all the action, but
exercised lots of eye-rolling with each inhuman action scene. Action,
explosions, fights and falls but not very bloody and several
tongue-in-cheek statements by Willis as is his “motus operandi” in
these DIE HARD movies. 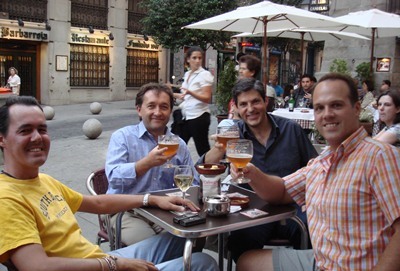 So enough about the movie. We nodded to each other with entertained facial expressions upon leaving the theater and headed out into the street. “Okay! Now what?” Valenciano_en_Madrid offered to take us to one of his favorite bars in Madrid. It’s called CafeeKe and is located near the base of the steps of the Arco de Cuchilleros (just out of above photo to the right) on Plaza Mayor’s southwestern corner. I called my buddy Steve and he joined us there soon after arriving. Got a nice 4-person table on the terrace with good views.
Photo from left: Steve (UK), Jamongris (UK), Valenciano_en_Madrid (ESP), & MadridMan (USA)

Time passed as fast as topics of conversation and consumption of delicious Belgian beer (called Chimay, I think). The generous waiters (from Morocco and Cuba) were great, friendly, talkative, and gave us good cheese cubes and nut-mixers for free tapas with our somewhat pricey beers. MAN, how time flies when you’re enjoying yourself. Before we knew it it was about 10pm and TWO of us had to get make trains and buses to get home before it was too late. 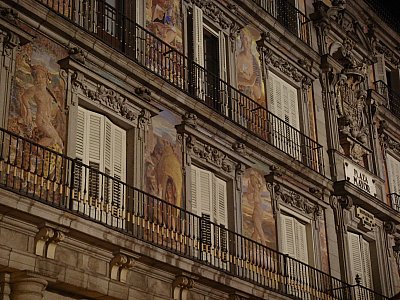 Steve and I, having more flexible work (?) schedules, decided to walk
through the Plaza Mayor on the way to our respective homes. Steve says,
“Shall we have a last drink? And maybe something to eat? I’m hungry.”
Eh! Why not. We look around the still-crowded Plaza Mayor and try to
decide on an overpriced, touristy terrazas. But which one? They’re ALL
so wonderfully touristy! hehehe… How ’bout La Torre de Oro?
Sounds good to me. We sit down at the terrace near Plaza Mayor’s
northwestern corner and the waiter approaches immediately. OKAY! Let’s
go wild! We chose a high-priced Gambas al Ajillo and the Chopitos. All turned out to be fair-to-good. Wine for Steve and beer for me.

Chit chat, enjoy the view of the illuminated paintings of the northern
side’s “Casa de la Panaderia“, drink, eat, more chit-chat. I notice a table of
3 American girls/women at the adjacent table and we all begin to talk.
They’re from Chicago and just off the boat (plane) in Madrid, arrived that day. They’re staying for quite awhile it turns out, all English teachers.

Once again, time flies, the girls/women leave, the bar starts to turn off its lights, and Steve and I shake hands and say our goodbyes until next time. I walk towards OPERA where I usually catch my bus but I know it’s already too late for that. It’s shut down for the night and so I’m in no hurry to get there. Will take the metro at Opera instead.

What a walk. My head’s full of memories and beer. I’m walking down one of Madrid’s narrow streets in Old Town. It’s after midnight. And then a smile crosses my face when it hits me. $%/*&! I’M IN MADRID!!!!! It happens like that sometimes. Joy washes over me like a summer rain – or maybe it’s just the warm beer, or something, I spilled down my leg. JUST KIDDING! But regardless (or “irregardless” as a masters degree-educated former coworker used to constantly say, making  me crazy!), I’m in heaven on earth. I’m in Madrid. Hope I never wake up from this dream come true.

Share THIS on Facebook!
This entry was posted in Entertainment, General and tagged Bars, Madrid, Movie, terrace, terraza, terrazas. Bookmark the permalink.

6 Responses to Madrid Friends are the Best!