One of the most common emails I receive (apart from the usual, “Can you recommend a incredibly wonderful, incredibly cheap place to stay in the heart of downtown Madrid?”) is about Flamenco in Madrid.

Understandably, travelers want to see the best of the best, the most authentic flamenco which exists in Madrid and Spain. I’ve been to a number of Flamenco Tablaos in Madrid – places which feature flamenco singing & dancing – and have witnessed some very impressive flamenco dancing but also some very average flamenco dancing. As with anything, the more one experiences/witnesses the more one can discern, appreciate, distinguish one from another.

And since I haven’t visited ALL of the tablaos in Madrid I can’t very easily recommend one over another, I can only mention those which I’ve personally visited but can also give suggestions based on the reviews of others.

Last weekend I went to a show at the enormous Corral de la Pacheca up near the Plaza Castilla. This coming weekend I’m going to one at Las Tablas near the Plaza de España. A few months ago I saw another show at Café de Chintas
and REALLY enjoyed that one – seemed very technically expert (as
described by one flamenco friends who went with me). I also very much
enjoyed last June’s show at Corral de la Moreria,
near Las Vistillas of the Viaducto. And was fortunate enough to attend
bout 8 flamenco performances (mostly singing, jazz fusion, but some
dancing too) at last May’s Suma Flamenca 2007 flamenco festival. Wow. That was a GREAT series. I’m still waiting, looking forward to visiting the much famed – probably the most famous flamenco tablao in Madrid – Casa Patas. Can’t believe this one has escaped me so long. 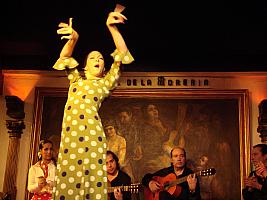 My list is experiences is growing but have far to go. There are something like 15 Madrid tablaos which have websites but probably 50 without websites. I’m focusing on those which have websites as those are the ones mostly likely the traveler will “trust”. (i.e. does anyone, anymore, book hotels without seeing them online first?? I don’t think so.)

Note about food: Generally speaking, flamenco tablaos are not known for their high quality or
of food (usually just “average”) – plus it’s always very expensive. I always recommend people
eat out elsewhere and then go to their 10pm or midnight flamenco show.
Tablaos nearly always offer you a free (first) drink and some snack
for sometimes half the price of a dinner+show entry. The
service/servers/waiters I’ve seen at tablaos have always been very
professional, well-dressed men (almost never women). And ALWAYS make reservations for shows – they’re often sold out on the weekends.

It’s my deduction that flamenco comes to you in many ways. Some appear more spontaneous. Others a appear very choreographed. Others make you shudder with disbelief. Sometimes they make you yawn and wonder how that dancer ever got a job – but this is pretty rare. Thing about flamenco shows is several individual dancers will dance at any given flamenco (usually about 6) show so you can kind of compare one dancer to the next within the same show. 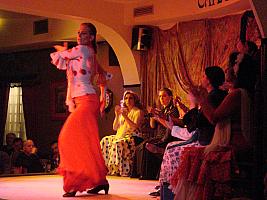 Who dances flamenco? Anyone can DANCE flamenco in Spain but the flamenco shows are performed (nearly) exclusively by the Gypsy people. Many gypsy people – most often very poor – learn to dance, sing, clap, and play basic flamenco music from a very young age for their own entertainment, culture, and expression but I fear this is beginning to change. More and more gypsy families have OTHER outlets for entertainment and expression these days, big screen TVs, PlayStations, etcetera.

Here in my neighborhood there are many many gypsy families. It’s very common to hear groups of young girls clapping their hands (as palmeras) in “flamenco rhythm” and singing saetas with already expert voices (to my UNexpert ears, that is). When I hear this on the street, in stores, or from my window I can’t help but be impressed, honored, fortunate to hear it live and spontaneous. When I express my impression to SPANIARDS they simply shrug their shoulders and say, “That’s just the way they are. They learn these things young. Everyone knows that!” One time I was in a local store and there was a toddler, maybe 5 years old, and she was singing a saeta with vocal patterns which just astonished me! There I was with my jaw hanging open in disbelief and no one else around me even noticed her.

People also are aware that in some Madrid bars flamenco will spontaneously “break out” and dancers will entertain the crowds. I’ve only seen this once so it’s a hit-or-miss proposition. These anomalous occurrences have been mentioned on the internet and so people ask me WHERE they can see something Spontaneous! If I knew this and if I knew when it would happen then it wouldn’t be very spontaneous, would it?? Travelers often have an image of Spain which is outdated or unrealistic or something the read about in a book. I’m sure that, particularly in the south of Spain, you could be seated at a bar and someone would start playing a guitar and then someone would become inspired, stand up, and dance around the room. Did this reallllly happen??? Maybe so. At leasts that’s the way it happens in the 1950s black and white Spanish movies.

Flamenco tablaos in Madrid are places to see flamenco shows. And who pays for flamenco shows? The short and easy answer is TOURISTS. Gypsies, unless they’re famous flamenco performers or aficionados, never go see other gypsies singing and dancing. They can get that at home! Tourists pay to see flamenco because, hey!, they’re in Spain! And what do you DO in Spain on vacation? 1) See a flamenco show, 2) Drink Sangria, 3) See a bullfight, 4) Eat Paella, 5) sit on a terraza no matter the season. So don’t think you’re not getting the authentic Spanish experience since you’re seated with dozens of other tourists. You’re there to watch flamenco and in a Madrid tablao is where you’re going to get it – the ONLY place you’re going to get it.

Don’t think gypsies walk out their doors and walk into the Madrid flamenco tablao clubs, go up on stage, and perform impressively. Nope. It doesn’t work that way. The best flamenco dancers/performers undertake years and years of instruction in some of the finest dance academies in Spain before they’re ready to perform professionally – and before the tablaos will even consider hiring them.

So WHERE are you going to get “authentic” flamenco in Madrid? At any one of the Madrid flamenco tablaos. That’s as authentic as it gets, really. But generally speaking, some of the most enjoyable shows are in the smaller, more intimate clubs. The downside of this is that IF they’re small, they’re not making much money. And IF they’re not making much money, they can’t afford the best dancers. So if they’re not the best dancers, you’re not likely seeing a high quality performances. I’ve seen performances in small rooms with 5 tables placed around a very small dance floor (in Granada) and enjoyed the performance. The dancer was young, probably still studying her art, and gave a good show to the few onlookers. This was enjoyable but even I could tell she had a ways to go with her technique.

History/Geography Lesson: Flamenco is historically a southern-Spain art form, in Analucía like Sevilla and Granada, but Madrid is a common place to find it too. In recent years, Madrid has been pushing hard to be better known for high quality flamenco and they’re slowly achieving “market share” on that front. If you go much further north in Spain it’s more odd, rare, strange to find flamenco at all. Many cities, however, will have a few flamenco tablaos to please the tourists. In Barcelona, I remember seeing lines outside of a Barcelona flamenco tablao and also cold-weather outdoor terraces packed with paella-eating, sangria-drinking, winter-coat-wearing tourists. Barcelona IS HISTORICALLY NOT the place for any of these things – except the winter coats in colder weather – so it looks out of place to my now more educated eyes.

Special Note: Depending on the flamenco tablao, oftentimes if you go to the 10pm show they will not kick you out at the start of the midnight show so you can double your pleasure for the price of one show.