Another Spanish holiday season comes to a close. It was nice and I tend to really enjoy Christmastime, no matter where I am. Being in Madrid, Spain makes it especially “exotic”, even after living here for 6-years.

The Christmas lights were the same as always, maybe swapped from one downtown neighborhood/street to another to seem new, but in times of crisis I can understand. I’m not for wasteful spending whether it be in the city’s budget or in my personal life. Who doesn’t like Christmas lights?!

Being in downtown Madrid is really special. The city is abuzz with people, shoppers, children and strollers. Crowds gather around the El Corte Inglés for the annual “Cortylandia” show near the Puerta del Sol. I missed the show, but saw the display. It did seem simpler this year. 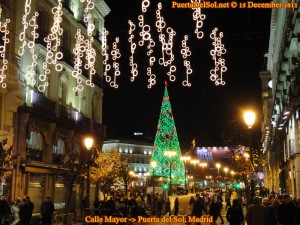 The Puerta del Sol Christmas Tree was the same as in the past, what, 5 years, but it looked as fresh as ever. That tall, green structure with the red star on top really calls your attention upon entering the plaza. I did miss the “Belen” or Nativity in the Casa de Correos – Comunidad de Madrid building this year, but saw it last year. Not sure if it’d changed or not this year. I’d even say this Christmas was a bit milder in temperature than in past years. No rain, either. (that’s both bad and good) 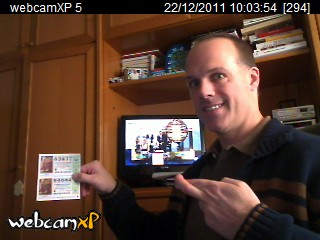 When living abroad it’s important to participate in local customs. So this year, as every year, I was “a good Spaniard” and bought 2 – 20€ tickets for the “El Gordo” Christmas lottery held on 22 December 2011. While attentive and listening to the hours of children singing-out the lottery numbers (while working), I won absolutely nothing. That’s the way it goes. Last year we’d won like 80 Euros, I think, but I’d invested 120€ in tickets. You do the math on that one.

This year I didn’t plan to attend the “Campanadas” (chimes) in Madrid’s Puerta del Sol at midnight so, instead, I attended the noontime, 31 Decembember 2011 “Ensayo“, or test-run of the midnight’s 12-chimes. The Puerta del Sol was not full, but very busy. Many many people had their 12-grapes at the ready, bottles of Sidra (Asturian cider) could be seen everywhere, and a lot of picture-taking took place. That was pretty cool. I’d never attended an “ensayo” before. I understand – and saw on TV – the other test-run the night before FILLED the plaza to near capacity. I did try to be there for that, but the buses weren’t running on schedule and so I missed it.

New Year’s Eve in the Puerta del Sol was another big affair. This year I spent “Nochevieja” with those whom I care about, watching the TVE1 specials including the José Mota comedy show leading up to the new year. We ate our 12 grapes at midnight – peeled and de-seeded BY ME (my annual job, like it or not. I know, it builds character) – with the 12-chimes of midnight, we all kissed each other on both cheeks, some shed tears of hope and loss, and we all toasted with Catalán Cava from our 50-year old antique champagne glasses passed down through the generation(s).

New Years Day was like any other day, really, but spent with friends and family at the house, all enjoying MadridMan-made-meals. I’d made roasted turkey (a female turkey – juicier, they say, topped with jamón serrano) for the Christmas Eve Dinner – attended by no less than 8 persons and seemed more like a Thanksgiving Day feast than anything – and a roasted chicken on New Years Day.

This year I was “totally bent” on seeing the actual “Cabalgata de Reyes” for myself on the Paseo de la Castellana – and I DID IT!!! I’m so proud of myself. After years of watching on TV, I’d finally ventured downtown and chose a spot one block north of the metro station Rubén Dario, directly on the plaza/glorieta of the statue of Emilio Castelar – a scenic, monumental plaza to say the least. But what a madhouse! I was there to take photos, but could see absolutely nothing!? Why? Not simply for the heads in front of me, but more for the dozens of fold-able ladders parents had brought for their kids to climb in order to see the parade! What little I saw was between bodies and the far-off photos came out fuzzy. When the 3 Kings passed – and seemingly halted, I walked south down the Castellana and had subsequently found better, less congested places to see the Cabalgata de Reyes. NEXT YEAR!! From the Plaza de Colón, I jaunted inward, passing through Chueca and the Plaza de Chueca (great Christmas lights there!!), crossing the Gran Vía, through Puerta del Sol, and finally to the Plaza de Opera – Plaza de Isabel II – where I got my bus home.

The morning before Epiphany, Magic Kings Day, or “El Día de los Reyes Magos”, I’d bought one “Roscón de Reyes” at the local bakery at 7:00am – and there was a line 25-people LONG!!  That afternoon I’d bought another for The Day, and then bought another “just in case”. Good thing we did, too, because we ate them all as people came over for not only breakfast but also for “merienda” on this wonderful Spanish holiday. I spent the morning with an elderly neighbor woman who lives alone and took coffee and the Roscón to share with her for breakfast. She was grateful, to say the least.

While typically the gifts brought by The Magic Kings overnight and opened first thing in the morning on the 6th, this year we opened gifts at the tradition-stopping time of 7:30pm!! Don’t worry, someone got the brunt of that delay. But at least we had it, albeit late, and with lots of gifts wrapped and awaiting their release from under the artificial Christmas Tree and Nativity Scene.

By the end of Sunday, the 7th of January, all the decorations were taken down at home, tree put away, gift wrappings and wine bottles were recycled, and left-overs were on the menu at the MadridMan home. Monday, the 8th, was a day like any other – apart from the scores of people whom had been on holiday/vacation for the previous 2 weeks. That’s gotta hurt.

The year 2012 is a new one, we’re fresh. And while the economist don’t predict this to be a better year from the last, I have hope. At least, they say, Tourism improved and is expected to improve even more in 2012. Let’s cross our fingers and see if we win the lottery. How better to start the New Year than with a New Fortune?!?! Happy New Year, everyone! MadridMan wishes you the best.