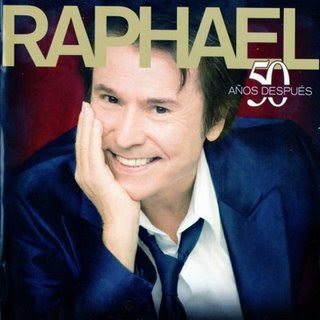 Anyone older than 60 years old knows who “Raphael” is – as well as the children of countless Spanish housewives of the 1960s & 1970s.

He’s Miguel Rafael Martos Sánchez, born in Linares, Jaén, Spain in 1943 but he and his family moved to Madrid when he was just 9 years old. Yes, he’s “Raphael” and not the more traditional “Rafael”. He adopted the non-Spanish spelling of “Raphael” when he first signed a recording contract with the Dutch recording label Philips, utilizing the first two letters of the company’s name. He’s like the (American) “Dick Clark” of Spanish singers in that he never seems to age. (Botox???)

Raphael is also like the Tom Jones version of Spanish singers performing in a very “Las Vegas style”, a real showman almost to a fault as his 67 years can now no longer sell his on-stage passion – at least not to me but I’m not his audience, either.

He also had a busy acting career in the 1960s and 1970s. Nowadays he still performs a bit, mainly showing-up every New Years Eve for his annual song, promoting a new CD. Amazing how popular this guy still is at this point of his life and career. He does pretty darn well for a guy who had a liver transplant in 2003 for a Hepatitis B. infection.

The younger generations tend to roll their eyes, shrug their shoulders, and reach for the remote control whenever he appears on TV. The elder “merienda crowd” (you know, the old ladies which dress-up & make-up to meet other old ladies for a 3-hour coffee or a glass of water at their local cafés) still love seeing his thick, wavy hair and boyish, ear-to-ear smile. You really can’t blame the guy, he can still work-it and retains a (wheezing) audience – although I’d bet most of his audience can’t turn on a CD player.

WikiPedia states: In 1966 and 1967 he represented Spain at the XII and XIII Eurovision Song Contest in Luxembourg, singing “Yo soy aquél” and Vienna, “Hablemos del amor” and placing both 7º and 6º position, although he did not win. It was the first time that Spain obtained a high place in the competition, leaving the door ready for the next year victory which Spain got with “La, la, la”, another song of modern style too, which for political reasons still in Spain then was sung instead by Massiel.

I’m not really a fan of “Raphael”, mainly because he’s not my style. I really just wanted to give a bit of background on the singer, the man, the person, all in order to introduce you to his version of “Aquarius“, sung in “English” (notice the word “English” is in italics). Watch the video below and try not to be too amused by his efforts. He’s trying, afterall. Have a little respect for your elders, don’tchaknow. But really, some people should try to doing things they’re not very well skilled at doing – particularly if they know they’re being filmed/recorded. With that, I give you…. “Aquarius“…

Share THIS on Facebook!
This entry was posted in About Spain, Entertainment and tagged Actor, Rafael, Raphael, singer, Spain, Spanish, Spanish singer. Bookmark the permalink.