First, Happy New Year, World! Today we find ourself riding through the mysterious date 1-1-11. I’m sure that means something to someone somewhere. 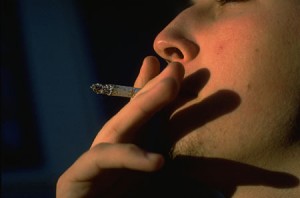 Second, “smoke ’em if you got ’em” because, starting tomorrow, a Spain-wide smoking ban goes into effect for all indoor establishments including bars, restaurants, discotheques, and party rooms. And it doesn’t stop there! Outdoor accesses to schools and hospitals will be smoke-free as well. Thank goodness they’re letting prisoners & psychiatric patients smoke in their respective places of “activity“.

Outdoor areas such as terraces/terrazas, stadiums, and bull rings will still be smoky, however, but give those poor nicotine addicts SOMEPLACE to blacken their lungs!

Have we no respect for those whom can’t control themselves? Shouldn’t we take pity on them? Should we treat them instead of make their activities illegal? Don’t smokers have rights too? Can’t we all just get long?? Shouldn’t we allow smokers their bars and non-smokers their bars too? Oh, wait, we tried that in the last smoking-ban go-around a few years ago, and, well, it didn’t “go around” too well. Frankly, it flopped. Then, they offered bars the option to be smoke-free or allow smoking. Guess what: nearly all chose a smoke option. Doesn’t that tell you something?

Many smokers say that nothing goes better with a coffee or a caña than a good cigarette. I guess I believe them as I, a non-smoker, have no reason to doubt them. Personally, I liked the way it was before. Spain wasn’t all that smoky. Oh, sure, you had some bars where, by chance, the majority of the patrons were smokers and the easily-bothered-non-smokers would leave in a huff to avoid the puff, seeking cleaner-air establishments. It was a hit and miss thing when it came to the smoke-density of any given bar.

I’m not a smoker and never have been so I don’t have that monkey on my back. THANK GOODNESS! But being next to someone who’s smoking doesn’t bother me much. It’s no fun having them turn and accidentally blow smoke in your face or nearly get burned by the red-hot ashes of someone who’s talking in one direction and holding “the smoking gun” in the opposite direction.  Smoke generally rises above plate-level so when I’m seated in a restaurant I’m (probably) not eating tobacco particulates. Everyone’s been around one of these anti-smoking fascists (there, I said it) when the first sign of a smoker sends them into exaggerated-coughing-fits to supposedly give the selfish “the hint”. Please! Leave the quiet smoker alone and stop your annoying coughing, already! Sheesh!

Now I feel so assimilated into the smoking culture of Spain that I really don’t notice all that much anymore. And tomorrow I probably won’t even notice the lack of smoke – at first. Since my first visit in 1995, smoking seemed to give Spain part of its rich character. They seemed to be a rebel population and for that I admired them even more from my “Don’t Do This” and “Don’t Do That” American perspective. Thank goodness with all of these US restrictions we can still claim to be “The Land of the Free“. Don’t get me started…

Will smokers simply quit smoking because they can’t have a beer or a wonderful coffee at their favorite bars? Not bloody likely, but I hope they can quit. It’s not healthy, don’tcha know. Why would anyone voluntarily inhale any foreign matter into an organ as sensitive as the human lung? It totally escapes me. Secondary smoke isn’t healthy either, I get that, but secondary smoke is only a small fraction as dangerous as the super-heated firsthand smoke drawn through a cigarette. (okay, throw me your statistics in the comments section below, please. I KNOW they’re coming…)

This whole smoking ban could have not only grave social consequence but economic consequences as well. Let me explain…

Smokers love bars and cafés. Heck, we ALL love them. It may come to pass that smokers will be so ticked off they’ll simply stop patronizing these establishments, sending the entire industry into a tailspin – and this in times of worldwide economic crisis. Then comes the panic on behalf of the owners. They’ll start thinking how they can recover this lost income. “I guess we’ll just have to raise the price of a cup of coffee and a caña to make up the difference.” And the higher the prices go, the fewer people will patronize them.

OR/AND, they’ll enlarge/create terrace/terraza space to accommodate those in exhile. If you’re a non-smoker and wanting to relax with some summertime drinks in the “fresh air” you might find the “fresh air” to be less “fresh” as you’ll be surrounded by smokers! And imagine the wait-times to snag one of those terrace tables! And you though things were bad now! Ha! Lines will be long(ER!!). It might turn out that non-smokers will be forced to have their drinks INDOORS 365 days a year – which totally goes against the whole Spanish need to be “outdoors”. And terraces won’t close in the winter, either, no way! Bars will set out those gawd-awful greenhouse gas-emitting patio heaters, further destroying our environment – and the rabid anti-smoker will say, “GREAT! Let them destroy the environment OUTSIDE. At least my air will be fresh INDOORS.” Yup. That’s a self-less ecological solution. (tongue-in-cheek)

Recently, a few “members only Smoking clubs” have opened up. This might be the wave of the future, folks. Members pay an annual fee and with this they – and only they – can enter these particular clubs, smoking to their black-lung’s content. And they must be non-profit. “What? A non-profit club? How would that work??” Members would pay an annual fee and with that the establishment can make money/profit – but not by the sale of drinks, food, or products.

Establishment owners caught NOT adhering to or not enforcing the smoking ban will be met with STIFF fines between 601 and 10,000 Euros. The government has teams of inspectors to start working tomorrow and you can be sure we’ll be getting an ear-full from not only the bar owners but also patrons from both sides of the aisle. It’ll be interesting how the ban evolves but the government is holding firm this time around; NO EXCEPTIONS for indoor public spaces whatsoever.

So how can Spain retain its Spanish flavor without cigarette or cigar smoke? It’ll be tough, I say. Sure, we’ll be healthier and there’s little else more valuable than that. But this price may be steep. The trickle-down affects may profoundly change the entire Spanish culture as we know it – and I’m not so sure I’m ready to let go of that just yet.

Reuters.com Video below: Smoking ban in Spain to take effect (1:25). A ban on smoking in public places will take effect in Spain in the New Year.