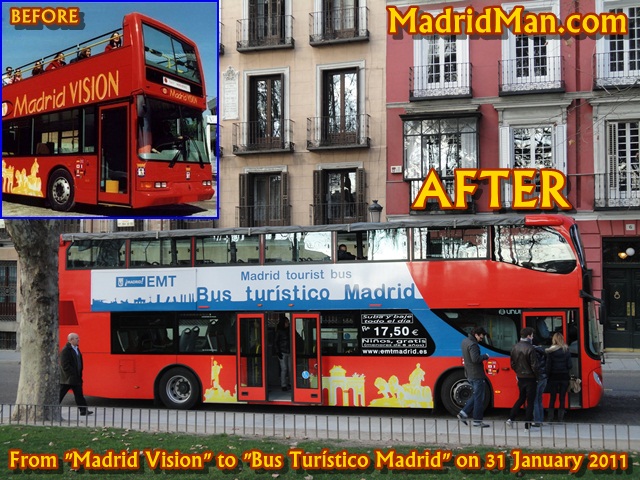 The 10-year old hop-on hop-off bus operated by “Madrid Vision” has become a horse of different color. Actually, it’s the same color but with a big metal sign covering the original name.

As of today, 31 January 2011, the city of Madrid’s “Empresa Municipal de Transportes de Madrid” (EMT) has taken over, albeit temporarily, until July 2011 at which time a new private company will assume control. The city expects to break-even as profits nearly equal expenses while (EMT) city bus drivers steer the double-decker behemoths through the streets of Madrid. City officials, which originally commissioned 3 tour companies to operate the service (see graphic below), did not renew the Madrid Vision contract in early January so they’re stuck with 27 buses.

Since 2001, the Madrid Vision tourist buses have driven countless thousands of visitors up and down, left and right, east and west, and all around Madrid streets, offering multi-lingual descriptions of the sights seen. The original two routes(.pdf), “Historic Madrid” & “Modern Madrid”, will not divert while the city takes the reins. The future owners, however, can do what they like.

I too have taken the Madrid Vision tourist buses at least 3 times in the last 10 years and always enjoyed it. Best to sit up top when the weather is nice and for the best views. I’ve noticed a temporary “cap” placed on the upper deck on colder & rainy days. Good luck to the future Madrid Tourist Buses! 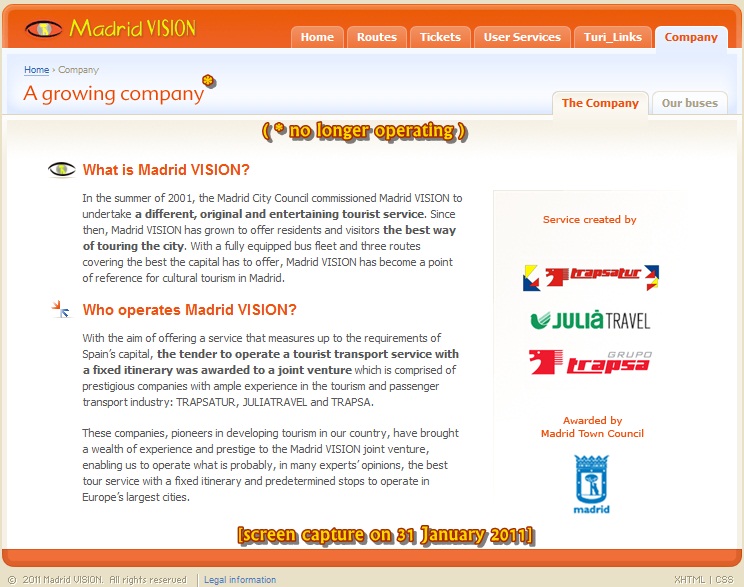