While extracted today, a (potentially) 174 year old lead box was discovered about a month ago from the pedestal of the statue of Miguel de Cervantes, author of the famed Don Quijote novel. The Cervantes statue, the first one in Madrid dedicated to an author, is located in Plaza de las Cortes, immediately in front of the Congreso de los Diputados building. This entire area is undergoing extensive construction to build a new underground parking garage. Part of the public works also encompass the plaza and statue.

The “Time Capsule”, as it’s being dubbed, could date back to 1835, the year the statue was erected – albeit originally erected 20 meters away in the same plaza. The box has not yet been opened but will probably be examined in the next week under controlled conditions at the Regional Archaeological Museum laboratory in Alcalá de Henares, where, coincidentally, is where Cervantes was born in 1547. Curiously, the lead box was the innermost of three; the outermost being of granite and then one of wood.

This, while minor in the scheme of world events, is absolutely intriguing to me and apparently to many others as well. Can’t wait to read/see what was inside from so long ago. Everyone loves the thought of finding a treasure chest with unknown riches inside.

In fact, other “treasure chests” have been found in Madrid. During the year’s long (and ongoing) construction & renovation of the Plaza de Isabel II (a.k.a. Plaza de Ópera), the statue of Queen Isabel II also contained a box of ancient artifacts including coins, documents of the time, and a copy of the act of the statue’s placement among other objects.

So the mystery continues until they open “Cervantes’ Secret” for the world to see. Is
it a hoax? Is it newer than anyone expects? Is the box empty? Or maybe
it contains the original manuscript of Don Quixote, written in the hand
of Miguel de Cervantes himself!? (doubt this last one, but wouldn’t
that be cool!?) 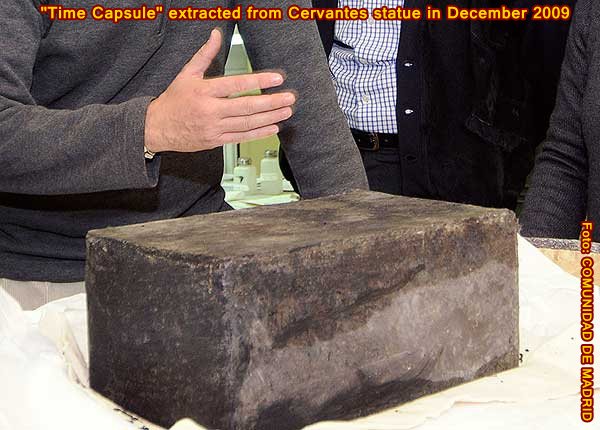 Today, the contents of the mysterious “lead box” time capsule was revealed to the public – as was its verified date of placement in the statue. It contained:

Interestingly, the above documents were inside a thin, sealed glass box immediately inside the lead box. Finding nearly 200 year old volumes, original or not, of Miguel de Cervantes’ Don Quixote is really something. Now we only have to wonder if the documents will be replaced into the statue – as in the case of the “Time Capsule” in the statue of Queen Isabell II in the Plaza de Opera – or be guarded in a museum for all to see. I’ll bet the latter.

I have to admit that while an interesting a historical find, it’s far from an archaeological find in my opinion. I don’t know. I guess was hoping for something more, well, exciting. 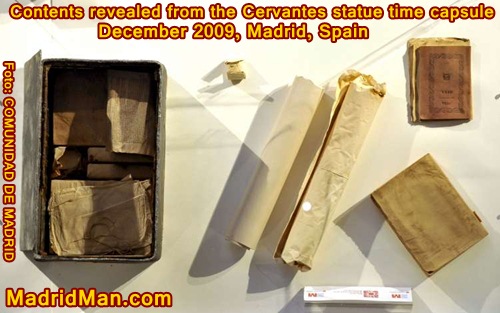 So that’s that. Mystery solved.