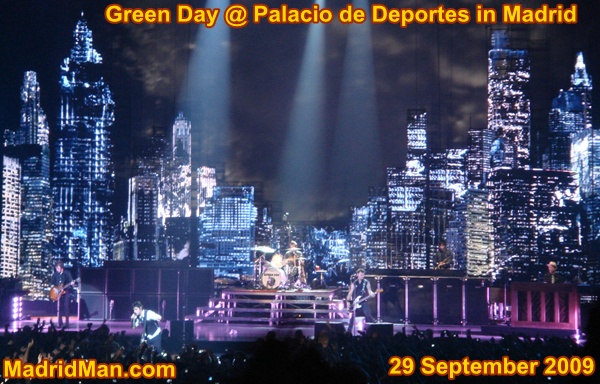 The Green Day concert in Madrid, Spain last Tuesday was a lot of fun – and just 1 day earlier I didn’t even know I’d be attending the sold-out show. I’d seen Green Day 15 years earlier in the small venue of “The Newport Music Hall” in Columbus, Ohio USA for their “Dookie” tour. This time around, promoting their new CD “21st Century Breakdown“, I wasn’t nearly as close, probably just past the half-way point of the large Palacio de Deportes. I couldn’t see their faces but their energy was no less evident.

Green Day, and particularly its lead singer Billie Joe in his endless energy, jumped off short-stack speakers, leaned into hard-driving guitar riffs, and entertained the crowd for more than 2 hours which included two encores, the last of which featured only Billie Joe singing “Good Riddance (Time of Your Life)”. The place was packed with Spaniards and even a few English-speakers.

The band played several of their songs from the 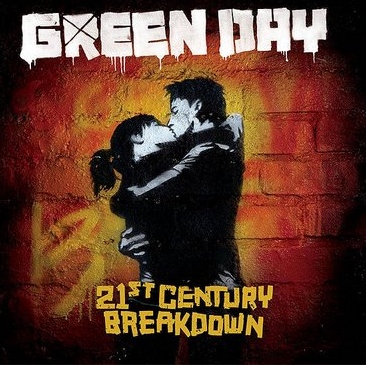 new “21st Century Breakdown” CD which, surprisingly to me, MANY of the Spaniards surrounding me already knew the lyrics and sang along as best they could. Getting past those, and delving into the “classic” Green Day songs, was when the crown went wild.

A mix of background skyline lights, epileptic-inducing flashing symbols & provocative video, and even some pyrotechnics kept the sold-out crown on their feet and, in many cases, standing ON TOP OF their fold-down chairs (like those annoying teenage girls directly in front of us!).

The music was loud, but not TOO loud from my place in the arena, and I didn’t notice a VERY loud buzzing noise in my ears upon laying me down to bed that night. Live video of the performers gave an up close view of action on screen and in the crowds and it was only then that we can see Billie Joe’s tattoos and how much he was sweating.

There was no warm-up band but that didn’t seem to bother the crowd,
waiting patiently until the the action started at about 8:30pm. They involved the fans too – probably a bit too much. During many songs the audience was invited to sing choruses – instead of Billie Joe doing so himself, which bothered me to the point that I was left feeling that we sang more than he did on some of my favorite songs. In addition, 4 different persons were invited onstage to “participate”. Billie Joe found a girl near the stage, asked her if she swore she knew the words to the song, she swore, and was hoisted up. She got the microphone and preceded to shout nonsensical lyrics for about 2 minutes, after which Billie Joe took the microphone and sent her off the stage with a “You Suck!” The next girl also swore she knew the lyrics, and she did know more, but couldn’t carry a tune to save her life. For honorable mention she was “invited” to do a “Stage Dive” into the huge mosh pit below. A small boy was invited onto the stage to simply swing his arms back and forth and I was thinking, “Oh my. I hope they don’t ask him to dive off into the crowd too. Imagine the lawsuit.” He didn’t and was sent back to his daddy. For yet another song, Billie Joe asked if anyone could play the guitar, ALL HANDS WENT UP and I thought, “Oh gee. This is going to be a disaster!” A young, lucky Spaniard wearing an “American Idiot” T-shirt was chosen. Billie Joe shouted something into his ear and flung the guitar strap over the kid’s shoulders and the band played on – AND THE KID ROCKED THE HOUSE! I was shocked, he played well, with passion and confidence, and really seemed to know the song by heart as Billie Joe sang.

What amazed me most was that these Spaniards surrounding me REALLY knew the lyrics to these songs and many of them were young! Who knows how fluent in English they were or if they even knew the meanings of the words, but they could certainly sing them! These were true Green Day fans, to be sure. 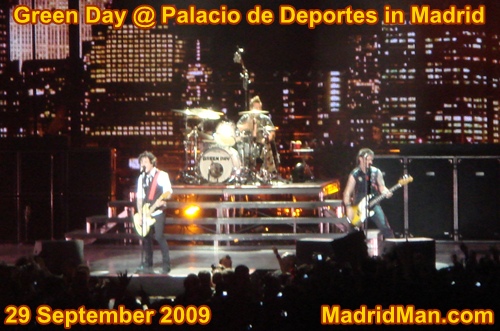 I, MadridMan, haven’t “let loose” or “lost control” in the last 15 years, age and maturity taking their toll. But for a few sporadic moments at the Green Day concert I felt as if I’d left my body, lost control, and scraped the edges of those youthful days dancing like an inebriated wild man at college clubs. (The Newport Music Hall, near the Ohio State University campus, being one of them) It was a good feeling, somewhat scary, and quickly reeled myself back in. It was like a flash of light of what it was to be young, untethered, and rebellious once again.

So HOW did I get so lucky to go to the Sold Out Green Day Concert in Madrid? The day before the concert I noticed a posting on a forum I frequent – but not my own. The woman from Liverpool (England) said she was flying to Madrid the next day and had an extra ticket that would go to waste if she couldn’t find a taker. I was the first to reply to her posting. She contacted me via email and said she didn’t want ANYTHING for the ticket! I met her the evening of her concert at her hotel and we walked the 8 blocks to the Palacio de Deportes venue, getting to know each other along the way. My Spanish came in handy in collecting the tickets, finding the line where we were supposed to enter, and finding our seats with the help of a nice usher. Being the gentleman that I am, I escorted her back to her hotel, thanked her for the 10th time for the ticket, and got home around 12:30am.

The serendipitous concert invitation was one for the books. When does this ever really happen to us? Rarely! But this time I won the lottery. (although I’d rather actually have won the lottery)