The European Man Bag Carry All

Many of the world’s more conservative, aged, or otherwise homophobic people may say that “Men were not intended to carry bags. Purses are for women.” These words are most often spoken by those in the non-European world. Isn’t Spain still considered a “macho” country? Maybe or maybe not. I don’t know anymore but I hope not. But regardless, many men, both young and old, do carry “Man Bags“.

The bags in the photo at right are rarely seen anymore. These are modern bags similar to those
carried by (only) older Spanish men. I still see these things from time
to time on the street They usually only have a wrist strap and would
carry a mobile phone, keys, wallet, sun glasses, prescription glasses,
medication, and whatever else.

Jerry Seinfeld referred to these in 1998 as Carry-Alls in “The Reverse Peephole” episode. He was carrying an in-hand, strapless bag which looks like a palm-sized briefcase which, in Spain, is/was called a “mariconera”
– a term I really hate because it suggests – not too subtly – that only
gays carry them. An offensive and not-too-rough translation would be “fag bag“. This term, although it still exists commonly, does little to describe today’s mobile European male.

Today, the much more popular “Man Bag” is the over-the-shoulder, across-the-body bag shown in the photo at left. THIS is the kind I carry the the kind most common with today’s youth to middle aged men. Sometimes they really are very fashionable, sometimes leather and very expensive. But most often they’re somewhat sporty, carrying athletic brand names like Puma or Adidas and usually made out of nylon. Some of these bags, as you can see in the photo at left, also has an external mobile phone pocket. Mine had one of these too but I recently cut it off because my PDA wouldn’t fit into it.

Many photos of me here in Spain show me wearing mine. I don’t even take it off at the terrazas or at the movies because it’s so comfortable. But I’ve been “warned” not to take/wear/carry it to the Opera or to any well-dressed affair because, well, they’re just not appropriate. But really, these things are great. I love mine and it’s usually packed full of stuff.

Now, when I re-watch the “The Reverse Peephole” episode I have to laugh even louder because of the following scene:

Keri: Do you still have my lipstick?

Jerry: Uh, yeah, I think I do. I can never find anything in here.
Ah, here it is.

HOW TRUE! The more space you have the more stuff you can put into it – kind of like the size of your closet, attic, or garage. It tends to be the end-point to a lot of things you want to keep just-in-case you may need it later – but then you can never find when you want it. 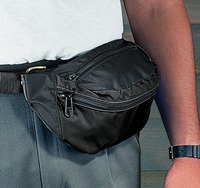 Back in the 1980s (?) there was a craze where people were wearing “Fanny Bags” (or “Fanny Packs”) in their everyday lives. Even I owned one! They soon became the icon of the typical American tourist when traveling abroad. NO ONE WEARS THESE ANYMORE anywhere. From time to time you might see a MUCH older American person wearing one.

The truth is, Fanny Packs or Fanny Bags just aren’t safe even if they are convenient. They’re usually fastened behind the waist by a plastic clip which could easily be pressed, released, and pulled away from the body in one fell swoop. Shoulder bags are much safer. Sure, one could use a knife to cut through the nylon strap but this would take more effort and more time. And, for those ever pick-pocketed in Spain or Europe, they KNOW NOT to carry a wallet in their back pockets – and carrying it in the front pocket just hurts! And have you ever seen those guys with 4 pieces of electronics attached to their belts?!? Now THAT’S funny!!

The male shoulder-bag industry is booming and, of course, the production cost of these things is very low for those made of nylon, costing between 10 and 20 Euros each and easily bought in “Los Chinos” budget stores. All of the department and luggage stores carry them as well as high fashion chains. My next “Man Bag” carryall will likely be leather because they so much nicer and more “manly” – if that’s important – but also much more expensive, costing around 100 Euros each. But my only fear is it’ll make my hip sweat in warmer weather since I’m such a hot body.

Shoulder bags, whether for men or women, serve a valuable purpose. I can’t imagine walking the streets without mine anymore. It’s close to my body, it’s in view, it’s safe, and it carries all the stuff I wouldn’t want to pack into my pockets. Who wants to carry their cell phone in their hand all the time? Or worse, in their pockets! “Is that a cellphone in your pocket or…”

UPDATE: the next morning after writing the above blog entry, by chance I found another blog entry made by FashionHerald.org called “The Man Bag” – although it was written 1.5 hours before mine with a New York City perspective. I wondered if two great minds were thinking alike at the same time or maybe someone had read the already existing message board thread, “Man Bag: Do you know what that is?“, which I’d started about 3 hours earlier. No matter, it’s an interesting – if not controversial – topic.

6 Responses to The European Man Bag Carry All