Party with MadridMan in Madrid: 24 January 2009

It’s time for the next…

PARTY WITH MadridMan IN MADRID!

When: Saturday, 24 January 2009, 8pm – 10pm+
Where: El Brillante bar, below the Hotel Mediodia, on the Glorieta de Carlos V (a.k.a. Plaza de Atocha)
Why?: Meet your fellow Madrid-lover (or make a new one), drink, eat, talk
Who: ANYONE! Come if you’re reading this blog, message board or Facebook members, residents & visitors to Madrid 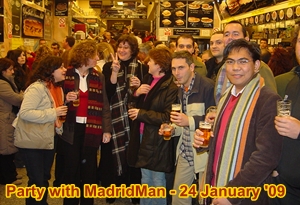 We’ve had so many of these “Party with MadridMan in Madrid” gatherings that I’ve lost count. The first one was in 1999, I think. We’ve even had a television crew record one gathering for a USA-based travel show. But one thing’s for sure, they’ve all been a lot of fun. The first party only had about 7 people. Our biggest gathering to date numbered about 50 guests. Others have been in the 30s and teens. A lot depends on the amount of notice we give people so they can see if the gathering fits into their schedules. Holidays are usually bad as people are out of the city. Weeknights are bad too.

The mix of people has always been interesting. At the beginning the nationality most represented was the USA. But over the years that’s shifting to about 50% Spanish and 50% “other”. We had one gathering where English speakers were in the tiny minority. It’s also a GREAT opportunity for non-Spaniards to speak to Spaniards about their lives in Madrid and Spain. Spaniards get to practice their English and non-Spaniards get to practice their Spanish.

We typically sit at terrazas or in bars to talk, drink beer and wine, and eat delicious tapas. The “El Brillante Bar”, a MadridMan FAVORITE, is a great spot to do just this because they have a large central space for people to stand together, there’s no loud music (or any at all) to shout over, and the clientelle is decidedly Spanish! The only negatives about the place is it’s a bit kitch/cutre, there’s no place to sit inside, and it’s not very centrally located (across from Atocha) for some travelers’ or residents’ likes. In nicer weather we’ve taken up near-total-occupation of their large terraza outside.

El Brillante is a good “Starting Point” to get to know your neighbor. There, we enjoy cheap food, cheap drinks, and easy conversation. The problem always arises when the bill comes when we’re ready to leave. How do you sort out how much Joe owes and how much Sara owes among 20-50 people?? After a couple hours of talking in relative peace, most go home, but some more hearty partiers go on to noisier, busier, more crowded bars for additional fun. We’ve had problems with the post-El-Brillante bars in the past because of the size of our groups. Since the gatherings are usually on Saturday nights, you can imagine how packed the small Madrid bars are upon our arrival. It’s just impossible, most of the time for our groups.

I’ve met some very very nice people over the years at our gatherings. Some of them have become very very good friends and I’m fortunate to know them. Other people attending are visiting Madrid for the first time and want to pick the brains of locals and residents to make their trip more fulfilling. Some are residents like me, Expatriates living in Madrid and loving it. Another group of attendees are the Spaniards themselves. THEY truly make these gatherings what they are and I’m happy they are interested in meeting new people from other cultures.

MadridMan rarely gets to spend much time with any given person at the “Party with MadridMan” gathering because of the size of the groups. With smaller groups it’s much easier, of course. Terraza gatherings are always so nice and relaxing but it’s more difficult to mingle when you’re seated in a chair.

So we hope you’ll be able to attend next weekend’s “Party with MadridMan in Madrid”! See the below links for more information:

Share THIS on Facebook!
This entry was posted in Entertainment, Food and tagged Bars, copas, drinking, el brillante, gathering, get together, Madrid, MadridMan, party, tapas. Bookmark the permalink.