Sometimes photos speak more than do the written word. See MadridMan below, the proud Ohio State University Alumnus (Class of 1989, Geology), watching his 10-2, 10th Ranked OSU Buckeyes beat the University of Michigan Wolverines for the 5th straight year in football. This year it happened in front of more than 105,000 spectators at Ohio Stadium in Columbus, Ohio, USA. This wins the Buckeyes a share of the Big 10 Title – shared with Penn State University. Notice MadridMan is wearing his favorite Ohio State sweatshirt for luck. Believe it or not, he bought that sweatshirt on campus at Long’s Bookstore DURING his college days. 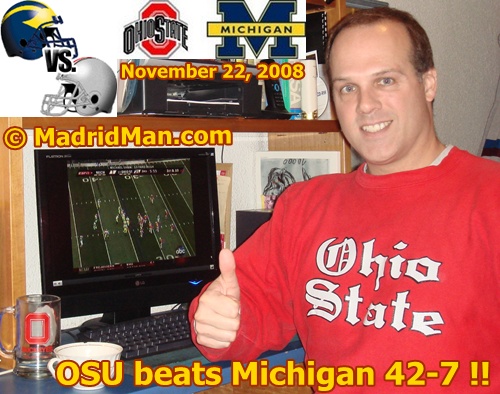