Today was a HISTORICAL day.

I met my good English buddy Steve at the newsstand kiosk outside the famous and historical Café Comercial (historical: founded 1887) on the Glorieta de Bilbao at roughly 1:30pm. This kiosk is fantastic for finding cheap DVDs of all varieties. They have hundreds arranged by category and cost 4.50€ to about 11€. They also have entire movie sets (like Star Wars, Rocky, or Alien) as well as lots of TV series. The DVDs are brand new, plastic wrapped, and are leftover no-nonsense DVDs usually sold, for example, for 2€ when you buy the Saturday XYZ Newspaper. I bought the following movies: “Halloween”, “Scarface”, “Hotel Rwanda”, and “Oh Brother, Where Art Thou?” All totaled: 22.50€

Done with DVD Shopping so we step into the Café Comercial for a stool at the bar. Coffee for Steve. Non-alcholic beer for me – and a free tapa of a plate of potato chip.

We’re talking away in the nearly empty bar. It’s nearly lunch hour afterall. Someone enters in the far revolving door and I pay no attention. That person leans over the bar behind me I hear him ask the bartender something. Steve’s eyes dart over my shoulder to the person there. I spin my head around just to take a glance, for a moment thinking the person is speaking to me…..And WHO IS IT????? 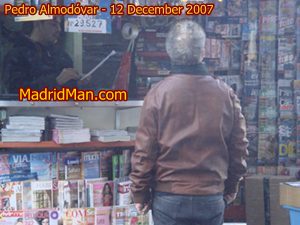 IT’S FREAKIN’ PEDRO ALMODÓVAR NOT 12 INCHES AWAY! I didn’t stare. I was nice and respectful, and quickly turned back to Steve, slightly nodding to him without words asking, “Do you see who’s over my shoulder?” And he oh-so-casually nodded “Yes. So what?” I say he said “So What?” without words because he had JUST seen Pedro Almodóvar in El Corte Inglés in SOL just the week before!!! So then the bartender answered matter-of-factly to the WORLD FAMOUS DIRECTOR PEDRO ALMODÓVAR and he then disappeared through the doors to the dining area…… and returned not 5 minutes later, out the door again he went to the street. Seems he just stopped in for a quick “Pit Stop”. hehehe… In fact, he didn’t leave the area immediately. He stopped at the SAME newsstand kiosk where Steve and I were just browsing not 15 minutes before. He lingered there, asked the news guy something, looked around, and  then left. I, sitting at the bar, then looked around at the other bartenders at their stations who were chatting when Pedro walked in – but they didn’t even stop talking, just as if it was ME who had asked that question. NO BIG DEAL! My goodness! The locals don’t seem to bother “the stars” much here in Madrid. Steve as telling a story about something or other and I was totally distracted and had to sheepishly ask him to repeat his last 4 sentences or so, not hearing a word, stunned with my “Brush With Fame” – HISTORICAL for me.. 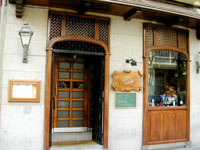 Calming down, we headed out of Café Comercial, heading west about 7 blocks and reach the Casa Ananías (Calle de Galileo, 9 in the Barrio de Chamberi) a little early for our 2:30pm reservations. Good thing we had reservations too because the place was FULL by the time we left. We walked in and took a moment to peruse the bullfight photos, BULL HEAD, and bullfighting memorabilia in the bar area. Passing through to the dining area we were seated immediately at a nice, 4-person table in the near-center of the restaurant. Perfect. We could see everything. No bullfight-theme here in the dining room, just wrought iron chandeliers, stained glass windows, and a very comfortable, traditional Spanish decor. HISTORICAL – Founded in 1930!

“Hey Scott! I think we’re the ONLY non-Spaniards in this place!” “I do believe you’re right! Including the wait staff!“ 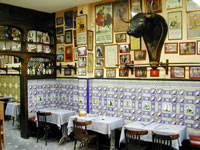 We
already knew what we were going to order before arriving but hey, let’s
look over the menu anyway. They have all the typical Madrid and Spanish dishes here. Steven and I ordered the same thing for the entire meal. For starters we had the Asturian “Fabes con Almejas”
– large white beans with small clams. OH! Man! OH-MAN! DELICIOUS! The
creamy sauce was so tasty that I sopped it up with the wonderful bread
after finishing. The second course was the “Cochinillo Frito de Avila“. At first I thought this was cochinillo – and didn’t notice the “frito” part on the menu but it was still good.  Cochinillo is roasted suckling pig but cochinillo frito – or more commonly called “cochifrito”
– is actually a slightly older pig, but cut and fried in small,
quarter-sized balls of meat and bone. Tasty but not what I was
expecting. I asked the waiter upon serving us if THIS was cochinillo. He paused and then

kindly explained that this IS cochinillo but made in the Ávila way. That is, cut into sections and then fried. I stand corrected. 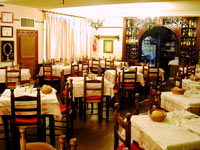 All this and we’d ordered a half-bottle of the house red wine which turned out to be a Rioja Crianza. Good, basic Spanish red wine and the perfect wine for the hearty meal we were eating.

While we were digging in, I was having quite a bit of trouble getting the meat off the bone with my knife and fork. Noticing this, the waiter passed by and said, with a smile, that it’s perfectly acceptable to pick up the smaller pieces and eat them with my fingers. Thank goodness!

For dessert we both chose the Crema Catalana and coffee afterwards. As a nice details – as they do in most nice restaurants at the end of a meal – the waiter offered us a free chupito – a kind of shot glass full of cold liqueur of several varieties. They always claim when they offer it to you, “….in order to aid digestion.” Ha! A very handy excuse to drink more alcohol. Does it REALLY aid in digestion?? I’d like to see the scientific studies on that one! Anyway, we were given the standard chupito, the Orujo de Hierbas, which is a yellow-ish green color and slightly sweet. Oh, and it’s quite strong and TOO EASY to drink.

As I said before, the place was FULL. The long table next to us were occupied by older Spanish ladies wearing furs and dressed for a special lunch. They were CERTAINLY enjoying themselves, drinking wine, having lunch, singing songs, and speaking quite loudly by the end. Other customers were business people, several tie-wearing men and couples, and even some families. It was obvious to me this was a place KNOWN to local Spaniards as a good place to eat a good meal with good service.

Total price for 2 persons… 71€. Gulp! THAT’S NOT your average, casual lunch tab!! Wow! They DO have a menú del día bit I don’t recall what was included nor how much it cost. But for a special lunch in a VERY SPANISH Madrid restaurant slightly outside but still accessible from the tourist center it’s a definite MUST try if your pocket book can take it.

We’re finally done eating. And we ate EVERYTHING! The bread was really great too. I love good Spanish bread. There’s nothing worse than having a good meal in a good restaurant but the bread sucks. HOW can a restaurant skimp on BAD BREAD when they’re charging you a lot of money for the meal??!! And with the price of decent bread being next to nothing there’s NO excuse for ANY restaurant to go-cheap on the bread. Spaniards know good bread and if they get bad bread – even if the meal is great – they’re less likely to return to that restaurant. HAPPILY, in Casa Ananías, this was not the case. Their bread was really first-rate!!! 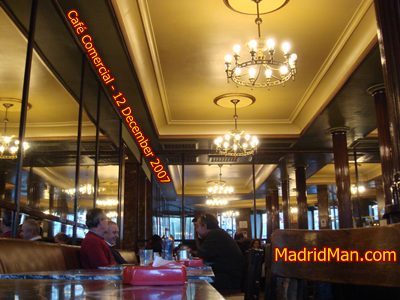 Steve and I walk back to the historical Café Comercial on the Glorieta de Bilbao because they have comfortable tables in a large space and we want to relax. We take a table against the far wall under the mirror-covered walls. Upon ordering two cerveza sin alcohol (alcohol-free beer – plus free tapa of nuts and crackers), a small group of old ladies in their 70s and 80s came and sat at the two tables next to us. Oddly, they all put themselves side-by-side with their backs against the wall, looking towards the open space. It wasn’t quite the hour for “merienda“, 4:45pm or thereabouts, but maybe they were getting together now before the early sunset. One woman ordered milk. One woman ordered coffee. And two of the women ordered water. Likely total tab for the waiter: 3.50€ – and probably no tip. Poor waiter. They were there as long as we and presumably simply gathering to talk and have an excuse to leave the house in the afternoon. The woman sitting closest to us took out a bag and began knitting!! How sweet.

We finished our beers and took to the street, walking downhill towards the center on Calle Fuencarral. We stopped here and there and looked in a few windows but Steve finally broke off near Chueca where he gets the metro. I continued on to Gran Vía and on to Puerta del Sol, down Calle Arenal to Opera where I got my bus home. At this hour, now 5:30pm or so, there weren’t SO many people on the streets as there were last weekend in the evening but still a good number.