Dia de los Santos Inocentes – How Spanish Am I REALLY? 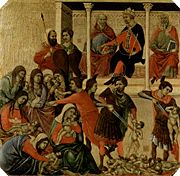 It’s also Friday. In short, it somewhat historically commemorates a Christian just-after-the-death-of-Christ legend in which King Herodes ordered the deaths of all children younger than 2 years old which were born in Bethlehem. Gruesome. Later in this entry I’ll explain what this means to Spaniards today.

Today I slept late. Too late – having stayed up WAY past my bedtime (as if I had one). The sun was shining and I could hear the nearby works of a building being constructed across the street. I went about my morning routine, did some work after breakfast, and decided to go get my hair cut.

Got dressed and walked through the buzzing neighborhood to my local Peluquería, walked in, said hello to the barber and had a seat in the waiting-area as the finishing touches were put on a female client’s hair. I said good morning and “How are we doing today?” to the old woman sitting in the waiting-area seat next to me. She looked me over as if I was an spotted elephant, nodded politely and said simply, “Fine”.

This is a small, two-chair unisex barber shop. The barber owns it. He’s a slick, now slightly paunched in the middle, one-time ponytail wearing, late 50s Spaniard who always dresses very very nicely – and likes to smoke while cutting hair. He’s a super nice, super talkative guy who’s been cutting hair since he was 18 years old. I found the place accidentally. When I first moved here someone had told me about a very historical barber shop in the neighborhood which had 5 seats, had old mirrors and early 20th century decor. Cool! I walked around looking for the place – and apparently walked right past it to the one I now faithfully patronize. The barber was so cool, nice, and VERY upfront. We liked either other immediately. He asked where I was from, I told him, and then he had all kinds of questions about me and life in the USA and WHY I’d come to live in Spain.

Whenever it’s time for a haircut and just before I walk out the door and on my way there I always have a few moments of anxiety because I know this will be a 30-45 minute block of time when I’ll ONLY be speaking Spanish – AND OFTEN. This occasion was no exception.

Today I sit in the hair-washing chair and lean back as the previous two ladies are leaving, kissing the barber and wishing him a wonderful New Year and exchanging small talk on their way out the door. They also throw a “And Happy New Year to you too!” as my neck is bent back in the wash basin and I give a smile, a wave, and a “Same to you!” as they leave.

I think the barber always enjoys the days I come to get my haircut. Maybe I’m simply being self-centered and imperialistic but this guy is always all smiles when I come in. Maybe it’s just because he cuts Spaniards’ hair day after day and has the same Spanish-discussions. With me he knows it’ll be something different. Maybe I’m wrong.

Today we talked mainly about Spanish topics like what we did for Christmas. He pointed to his decorated Christmas tree in the corner of the barber shop and said he and his family had been celebrating “Papa Noel” at home for about the last 20 years – long before it was fashionable. FYI: “Papa Noel” – or Santa Claus – in Spain is a recent observance, coming several years after the dictator Francisco Franco died in 1975. But he also asked me about our Thanksgiving Day in the United States, what it meant, on what day it fell, and how we celebrate it. He already knew about the turkey feast, no doubt from seeing it portrayed in movies.

I’d told him, jokingly, that this year I didn’t really celebrate the “Santa Claus” form of Christmas “Now that I’m nearly totally Spanish” and that no one I know here really does, so no presents for/from me this year except among my biological family. My parents really enjoyed the Tienda.com gift basket with Spanish goods and my sister was happy to receive the Amazon.com gift certificate. All were ONLINE ordered and shipped goods this year.

Between puffs from his cigarette, he and I also discussed how we were spending our New Years Eve. I told him that unlike last year when I spent part of the post-midnight playing cards & dominoes – the typical evening events on New Years Eve in Spain – that I was thinking of going to the Puerta del Sol to be with the other immigrants, tourists, and the 2 or 3 Madrileños celebrating the the New Year and eating the 12-grapes at midnight — or, actually, eating them AFTER midnight because it’s impossible to hear the 12-chimes of midnight over the din of the crowd.

The barber found it interesting and said that he had gone ONE TIME to the Puerta del Sol just to have the experience but never expects to return because A) there are too many people, B) the plaza party stops 10 minutes after midnight (and the police force you out of the square too), and C) it’s impossible to get a taxi after partying downtown and there’s no bus or metro service if you stay too late. I told him that by my going to the Puerta del Sol for New Years Eve – Nochevieja – I’m fortifying my community standing as being “more Spanish”. hehehe… He laughed. He said he plans to spend the evening at home with family singing karaoke and playing games.

He finished my hair, brushed me off, I paid him and gave a tip. After helping me on with my coat – as he does with all his clients – I gave him a small box of chocolates and wished him a happy holidays. With that he opened the door for me and I stopped in the doorway, spotting a 2 Euro coin on the ground just outside the door.

I said to him, “Wow! Look at the luck I have today! There’s a 2 Euro coin down there.” I stepped out to the sidewalk, leaned down to pick up the coin and couldn’t get it. ! I said, “Wow. This is really stuck!” And with that, the barber, now standing in front of me, laughing loudly and said, “I GOT YOU! I GOT YOU!“

I stood up and asked him what was so funny. He asked me if I knew what day it was. I answered, confused, that it was the 28th of December. He then put his hand on my shoulder having lost his smile and said to me in all seriousness, “You see, my friend, you’re not as Spanish as you might think. Today is Día de los Santos Inocentes”, the day we play tricks on each other. No matter how long you live here and no matter how much you learn about Spain there will always be things you will never totally understand.” How true that is. 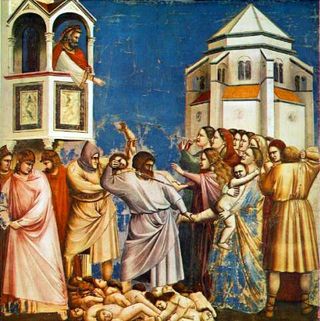 But my question is, how does a Christian myth about killing babies in Bethlehem become a joyous, trick-playing holiday in Spain and Latin America?

It seems that in the Middle Ages, Christian writers speculated that between 3,000 and 15,000 Bethlehem babies were murdered by King Herodes just after the death of Jesus Christ. But according to the official census for the town of Bethlehem there were no more than 800 total inhabitants at the time. So in the mathematical reality, it is now presumed that no more than 20 births would take place each year at that time and 50% of them would die of natural causes before reaching their second birthday. So according to calculations, no more than 10 should have been murdered in any given year. So where does the 3,000 and 15,000 figure come from?

Answer: It’s a lie. A trick. And now these tricks are played on unsuspecting suckers like me who don’t know any better. The media often publishes false headlines in their newspapers, radio stations broadcast false or shocking “news items”, and friends trick one another.

So how Spanish am I REALLY? Okay. I’m not THAT Spanish.

By the way, if anyone would like to buy MadridMan.com it’s for sale. I’m moving to Mars with my recent lottery winnings, establishing a colony called “Mayberry“, and planning to change my name to Andy Taylor. I’ll be the Sheriff and will need a reliable deputy. Any volunteers?

2 Responses to Dia de los Santos Inocentes – How Spanish Am I REALLY?