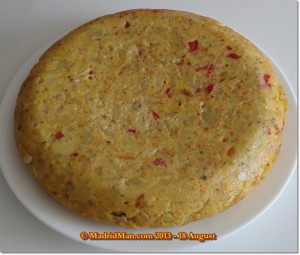 The following is a tortilla de patatas recipe by MadridMan™ himself. I’m not saying it’s the BEST recipe, but my Spanish eaters seem to like it, bringing me ever-closer to winning the Best Non-Spaniard Spanish Cook award in this house. (that’ll be easy since I’m the only non-Spaniard here)

Question: What is a “tortilla de patatas”? Answer: It’s a “Spanish potato omelette“, also known as “tortilla española” in Spanish. It’s made with eggs, potatoes, and salt to start. Additional ingredients depend on the preference of the cook. Spain loves its “tortilla de patatas” as much as its Paella and I’ve seen a dozen different kinds. Here’s mine in only (?!?!) 34-steps:

TOOLS OF THE TRADE:

WHAT TO DO, STEP-BY-STEP:

I started making the famed “tortilla de patatas” a few years ago and it definitely is a practice-makes-perfect journey. The first effort was a disaster, the potatoes were overcooked and brown, too salty, and I burned my plate-hand with the hot oil when I turned it. Plus, it took more than an hour to make. The second was less, but still brown and bland for lack of salt. Happily, the third and (nearly) all subsequent tortilla de patatas were edible and quite attractive and took roughly 45 minutes from start to finish.