Fun For Kids in Madrid: Row, Row, Row Your Boat

Renting a rowboat isn’t the first priority on tourists’ To-Do-List in Madrid, Spain, but it sure is a pleasure if you have time, if you have good weather, or if you have kids!

Over the Easter holiday I rented rowboats in both of Madrid’s “lakes”, Retiro Park and Casa de Campo Park, and both are similar experiences apart from the setting. A couple relatives came to visit me in Madrid over the Palm Sunday weekend, one of which was a 10-year old boy. So what does one do with a 10-year old in a big city? Answer: Anything which has moving parts. So that’s what we did!

Saturday we went up to the observation deck under the clock tower of the Palacio de Cibeles for a 30-minute visit – of which we spent 15 minutes before the 10-year old got bored. GREAT views from up there with lots of photo-ops of the Madrid skyline.

From there we walked through the nearby Retiro Park and rented a rowboat on the north end of the park. It was a cool, but partly sunny day so we three took the boat out for the entire 45-minute rental period, letting the 10-year old do most of the rowing at his insistence. 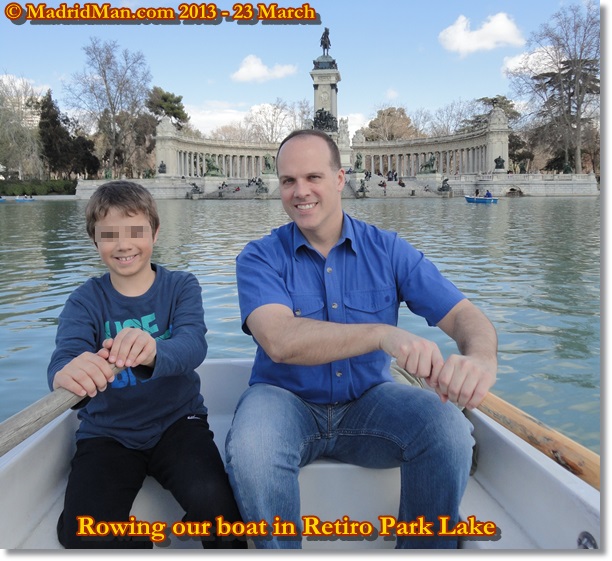 We enjoyed views from the 4-corners of the lake, admired the fountains, watched the ducks, and avoided crashing into the other rowboats. The people lying in the sun on the Monument to King Alfonso XIII looks so relaxed and I vowed to do that some day. We also saw lots of kissing-couples drifting through the water while others were full of families or giggling friends as their boats tipped.

On this day, everyone was enjoying themselves around the 60,000 m2 Retiro Lake “estanque”, as were we; no blisters incurred and no complaints shed.

Details: No reservations necessary. 45-minute rental. Price per boat, not per person. 5.80€ Monday-Friday. 7.50€ Saturday, Sunday, holidays. 10:00am-6:30pm. Hours are seasonal, but they are open until about 45-minutes before sunset.

Sunday morning was much cooler. We first took the double-decker Madrid City Tour touristic bus, route #1. Making one entire loop (without getting off) took about 40 minutes. After the first 15-minutes, the 10-year old was bored, complaining that each building looked exactly like the last. Understandable.

We also missed our intended stop because we didn’t go downstairs and tell the attendant. Apparently, they don’t automatically stop at every bus stop on the map unless requested. Lesson learned. Details: 21€ per adult, 9€ for kids 7-15 years old. RESULT: 51€ for 40-minutes of boredom, complaining, runny noses in the cold = a waste of money/time. Not recommended for kids. Live and learn.

Getting off at the Royal Palace/Palacio Real, two stops after our targeted stop, we popped indoors for hot coffee and chocolate and churros to warm up after freezing on the open-top bus.

Next, we walked through (read: past) the Plaza de España and up the Calle Ferraz and bought a loaf of bread to feed to the pigeons/birds. Next, we crossed through the Templo de Debod and briefly admired the views of the “river valley” and the Casa de Campo Park as well as the Royal Palace and Almudena Cathedral. Here, the pigeons had their first meal from us – but not their last.

Continuing up through the park paralleling the Paseo Pintor de Rosales, we reached “El Teleférico“, the cable-car sky-lift from the Parque de la Rosaleda to the Casa de Campo.  This, the kid enjoyed! We got on and crossed over the Río Manzanares river with views of the Estación del Norte train station, the Royal Palace, and the Almudena Cathedral while spending most of the time over the unusually green Casa de Campo Park. Details: 4€ per person one-way or 5.75€ round-trip. Trip lasts about 15-minutes. Recorded, in-cabin auditory presentation can be given in English when requested at the time of boarding.

We got off in the recently remodeled Casa de Campo Teleférico station which has a large terraza bar/restaurant (fast-food, mostly) with views of the Madrid skyline. Funny, in order to exit the station one must first pass through a gift-shop!

Now we’re at the highest (?) elevation of the Casa de Campo park. Everything’s wonderfully green thanks to the seemingly and unusually non-stop winter/spring rains. Time for a walk around the trees, climbing on the playground’s Jungle Gym, and admiring the Madrid skyline. We walked around for 20-minutes before we noticed the tall-shooting fountain of the Casa de Campo park lake below and in the distance.

Although I’d bought the return/round-trip tickets on the Teleférico, the 10-year old insisted that all he wanted to do was to return where we were yesterday, the Retiro Park, to row a boat again. Luckily, I was able to persuade him to row a boat at the nearby lake below us instead. So we walked.

We walked downhill, followed winding trails, stopped for a sit on a log in the sun to admire the Madrid skyline and tiny wildflowers and take some photos. There were a few other hikers around, too, as well as a young couple relaxing under a tree with a sandwich-and-Coke picnic. What a pleasant, mostly sunny day! This is something I’d never done and was enjoying this nature walk. And as most adults know, happy children make happy adults.

After a good 20-minute walk – including a race to the next tree, we reached the Casa de Campo lakeside, passing first through the restaurants and their terrazas. Hurray! There were lots of busy ducks and large Carp fish swirling about at the surface. Break out the loaf of bread!! There, we spent 20-minutes feeding them both, watching the ducks scrambling over each other and the carp gulping at the water’s surface with their big, fat mouths.

Saving some bread, we walked to the southern edge of the large(er) Casa de Campo lake to rent a boat. I rowed us away from the pier, but the 10-year old quickly took over, splashing all over and fighting a fierce headwind. After 20-minutes of going in circles and being wind dragged to the far side of the lake, my butt took the driver’s seat, putting some muscle into the old wooden oars in search of ducks to feed. I’ll tell you, I didn’t do much better! With much effort, I was able to get us to the far sides of the lake, found some ducks to feed and even more carp. The lake’s high-shooting fountain was mercifully turned off so we didn’t have to deal with getting wet on this now cold, windy and cloudy afternoon.

The Casa de Campo lake is 80,000 m2 in size, that’s 1.3 times larger than the Retiro Park Lake. This is no pond (!) and requires the entire 45-minutes to make it to the four corners, leaving 10-15 minutes for the return. Details: No reservations necessary. 45-minute rowboat rental. Price per boat, not per person. 5.80€ Monday-Friday. 7.50€ Saturday, Sunday, holidays. Hours are seasonal, but they are open daily until about 45-minutes before sunset.

On our way back to the boat dock the wind was stronger and I felt the first sprinkles so we made our way to one of the outdoor/enclosed cabañas for lunch. We chose “La Cabaña de Senen“, sat down, and it started to rain. Great timing. The lunch consisted of typically Spanish “raciones”, all chosen by me, to be shared among us. I ordered a plate of “almejas a la marinera” (clams in garlic sauce),  “chorizo a la sidra” (cider-fried chorizo), “croquetas de jamón serrano” (serrano ham croquettes), and a plate of fried potatoes with mayonnaise. (mayonnaise?!) While the 10-year old had promised to try different foods during his first visit to Spain, in the end he ate nearly nothing but fried potatoes with mayonnaise. That’s okay. If he’s happy, we’re happy.

Summary: Rowing boats in Madrid, hiking in parks, and feeding the animals are quite possibly the best things for 10-year olds. Luckily, he loved the pancakes and French toast I made him for breakfast.

2 Responses to Fun For Kids in Madrid: Row, Row, Row Your Boat