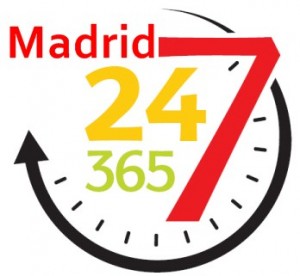 It seems the market(s) is taking a wait-and-see attitude toward the Comunidad de Madrid‘s new law allowing stores to stay open 24-hour hours a day, 7 days a week, 365 days a year which went into effect on 14 July 2012. The idea is to increase consumerism, create employment, and buoy the economy, of course. But with more and more people being laid-off/fired, salaries of the fortunately-employed reduced, and the recent and drastic rise in the IVA tax, who’s going to shop MORE? The well-to-do will shop more, I guess, but not many others. They average person will, however, alter their shopping habits.

This new act will definitely benefit the big chain stores as they’ll be able to afford the added operational costs for lighting, air conditioning, heating, and (maybe) added man-hours. But as many retail employees are paid monthly, they may well be working more hours, but not compensated for them.

The new Always-Open option will also put small shops at risk. In many cases, these small shops are operated by only one employee or is the owner him/herself like at shoe-repair shops, dress shops, butcher shops, florists, shops, and so on. These people aren’t going to work 7-days a week and they’re not likely to hire more personnel to do it, either. It’s just not feasible for them. If people spend their week’s allowance at the always-open shops the smaller shops will eventually close as they cannot compete.

There’s an old saying among Spaniards which goes, “We work to live. We don’t live to work.” Spaniards cherish their free time; time for holidays, time with families, time to have drinks outdoors with friends. For Spaniards, closing their shops for an entire month in summer is a sacred right and (most) everyone respects that right. Sure, it’s inconvenient consumers for a few weeks, but that’s the way it goes.

Closing the Mom-and-Pop shops will cause a serious social shift as well. Earlier this year I wrote, “Feels Like Home when Merchants Know Your Name“, where I waxed poetic about how nice it was to interact with the neighborhood shopkeepers, they knew my face, my history, and some knew me by name. I asked about their families and they asked about mine, never too busy to chat while preparing my meat, fish, fruit, chicken, or olives purchase. It’d be a shame to trade this rich, social interaction for a more superficial supermarket or mall-experience with teen-aged employees.

For tourists visiting Madrid for only a few days, it’s a fantastic opportunity – and maybe it’s at that sector this new law is being aimed. Before, nearly all stores closed at 2pm on Saturdays and did not open on Sundays. There, I can see tourist revenue was lost.

Dare we trade culture for sterile consumerism? The corporations, economists, and maybe even the consumers would say yes. Is it possible to maintain both or does one destroy the other? During times of crisis is often when advantage is taken of the people and sometimes it’s hard for us to see the forest for the trees. It’d be a shame to become so homogenized into the world that Spain could be Norway as easily as it could be Canada. That’s not likely to happen in our lifetimes, no, but we it sometimes seems we’re headed that way.