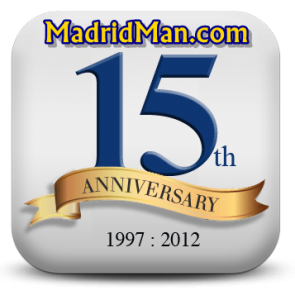 Today, 20 July 2012, is MadridMan.com‘s 15-Year Anniversary. MadridMan.com is now a maturing teenager, but still has a lot of growing up to do. JUST WAIT until he gets into his 20s!

The domain name was registered on this date 15-years ago, but “MadridMan” was actually born “without papers” about 10 months earlier in 1996. At that time, “MadridMan’s Yankee Home Page” was hosted for free on a GeoCities website at dawn of the Internet. It didn’t haven much success until “MadridMan” spawned his own DotCom. In 1997, domain names were expensive. I remember it cost $200 for a 2-year registration period. Imagine that. Now they cost about $11 a year.

GeoCities (now defunct), where the website was originally hosted for free, was the place where “MadridMan” was created to combine my passion for computers (hardware and software), the blossoming Internet, travel, and to share my new love for Madrid, Spain which I’d visited just 5 months earlier. It was also created as a learning tool to better educate myself about Madrid and Spain, its customs and culture, and its people and places. “Everybody needs a hobby,” is one of my favorite sayings. And this hobby became mine at a time when I really needed one. Life had its challenges for me then. And that’s where it all came together to give me what I have now, 15-years later, a dream-come-true-life in Madrid, Spain, being my own boss and making a living at it, too!

MadridMan has given me everything I have today – apart from family, of course. It gave me a bunch of wonderful new friends from Spain, England, and many other countries. It opened my eyes and mind about other cultures, political views, and other ways of living.  It gives me an income – albeit not a fixed/reliable one as I’m “Autónomo” (self-employed). It allows me the flexibility to work-and-play at my own schedule. And, best of all, it afforded me the opportunity to live in Madrid, Spain. 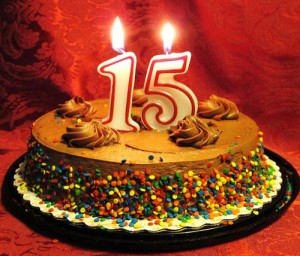 “MadridMan” should also acknowledge “that guy behind the curtain” which worked a 9-hour day and came home to work another 9-hours, plus weekends, developing the website and adding information in those initial developmental years. And Thank You, “MadridMan“! That-guy-behind-MadridMan couldn’t be more grateful. (Don’t worry, I’m not having a psychological identity crisis, keeping the two separate)

And finally, OF COURSE, whom do I have to thank for reaching this mild milestone? Of course, the visitors to MadridMan.com!!! THANK YOU ALL SO MUCH!!!!!!! Without you, those reading this right now and those which came before you, NONE of this would’ve been possible. Without Internet traffic there is no way to exist or to thrive. Sure, MadridMan.com IS a now part of my business, but it’ll always be my most-loved hobby, too.

9 Responses to 15 Year Anniversary for MadridMan.com