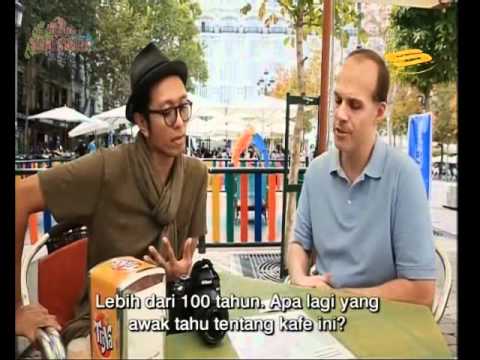 Last September 2011 I had the true pleasure and privilege to escort television personality, Najip Ali through the Plaza Santa Ana and the Barrio de Huertas in Madrid – ON CAMERA!!! Najip is the host of “Makan Angin Sepanyol” (“Spanish Holiday”) on the Singapore Malay language channel, “Suria”. See how things transpired in the Episode TWO video below. My part starts at 20:30 and lasts ’til 25:15. You’ll find Episode one just above that.

The show’s producer contacted me a couple weeks before their visit in hopes that I could show them my favorite part of Madrid – and they left that up to me. Her first email stated,

“We hope that you will be able to show us Madrid’s best kept secrets i.e.. attractions, food, cafes, restaurants, etc. I read your blog and am very interested to feature you in the programme.“

Wow! I was flattered! My big chance to become famous…….. in Singapore! So where shall I take them? What’s my favorite part of Madrid? The Huertas Neighborhood, of course! Yeah, yeah. I know they’ve lately been trying to re-brand it as “Barrio de las Letras”, but that just sounds too uppity, too posh for me, so I’ll stick to the working man’s term, “Huertas“.

I’d been on camera once before for a Madrid-focused show, “The Wild Wild Web” (now defunct/canceled), but that was more than 10-years ago! This time was different and more intense. There were lots of starts and stops, lots of retracing our steps for Take 1, Take 2, and even Take 3 to get things just right. And my mouth was constantly dry and fumbled through some of the answers. That’s what happens when you work with amateurs, don’tchaknow!

I first gave a bit of history of the Plaza Santa Ana and told why I liked it so much. The host, Najip Ali, was very very nice and his English was good – after the first few moments struggling with his accent. He was giving the audience a summary in Malay (language) and then asking me questions in English – which he’d then translate back into Malay.

The producer had sent me a list questions for which I had to answer on camera at Najip’s prompting. Needless to say, I was totally prepared. Thing was, when we got there and were walking the streets, I think he asked just 1 of those 10 questions and 9 more for which I didn’t have answers prepared! I immediately saw how this was going to go – ME being embarrassed on Singapore TV,  a dolt who doesn’t know the first thing about the city in which he lives. Oh, gawd! It went okay, though. Thank goodness Najip was easy-going, patient and had a good sense of humor which put me more at ease.

After leaving the Plaza Santa Ana, we started down the pedestrian “Calle de Huertas” at my recommendation. As it turned out, the pedestrian Calle de Huertas  which wasn’t very pedestrian on that day! Cars were constantly going coming and going, causing us to “Cut!” and start over. The street only allows local traffic, but there was a lot of it on this day.

My most embarrassing moments came when Najip would stop and ask about the gold-lettered writings on the street’s paving stones – and then ask me to translate and interpret them. Well…., while I did take a Spanish literature class at the university – 25 years ago(!) – I couldn’t begin to interpret the abstract meanings of any of them. My on-the-spot translation of OLD Castillian Spanish left a lot to be desired.

Sometimes Najip would point up to an old building and ask something like, “So what’s significant about this building?” and I’d have no answer. THAT didn’t make it to video, luckily. But I was able to talk about the convent on Calle Lope de Vega in which Miguel de Cervantes was buried. Whew! But that was an easy one. Thank goodness!

We ended the Huertas Tour back at the Plaza Santa Ana were Najip and I took a table on the terraza of none-other than the famous Cervecería Alemana – after first securing permission from the boss earlier in the day, of course.

The end-product video they produced graciously used much narration. Therefore, you see Najip and I walking and talking, but you don’t hear our voices, only that of the narrator in many scenes.

There are 8 total episodes, but only first two take place in Madrid. I’ve included those videos below. And below those two videos you’ll find direct links to the other 6 episodes where they travel to Valencia and through Andalucia including Córdoba and Granada. The videos are all spoken in Malay, but with English subtitles.

It was an honor to be invited. Thank you!!