(pssst! One of the below photos contains full rear male nudity. if you’re sensitive to such things, read no further – but you don’t really see anything apart from their rears. Speaking of rear-ends, this blog entry has an ending which you might – or might not – expect. What happened at the curtain-call surprised me! Also, see a couple YouTube videos at the conclusion of this blog entry)

“CHOEURS“, in French, means “choirs” in English. “COEURS“, in French, means “hearts”. Overlap the two French words and you get “C(H)OEURS“, which means something like “Choirs of Hearts” or “Heart Choirs“. “C(H)OEURS” is the name of the new Alain Platel performance and is being performed at Madrid’s Teatro Real – or Royal Theater or Opera House – and I witnessed it last night with my own eyes. 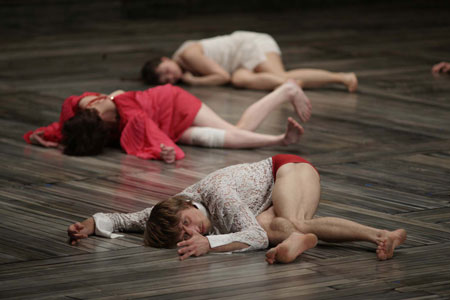 The tickets for our second-level up, front row seats were 80 Euros each and part of a multi-performance “bono“, a specific collection of performances at Madrid’s Teatro Real for this season. The cheap seats went for as little as 70 Euros while the best seats sold for 172 Euros. C(H)OEURS was listed as a ballet as the genre of the performance, but some websites call it an Opera. Hmmm…. This wasn’t like any ballet or opera I’ve ever seen. It certainly wasn’t classical ballet. And I would go so far as to say it was contemporary ballet, either, not like the Contemporary Cuban Dance ballet I saw in the Teatro Real last month, anyway. As for being an opera, well, I’ve seen half a dozen in my life and, while there were a couple moments of Opera-style singing, it wasn’t the focus of THIS performance.

10 dancers were center stage while 66 choir singers, of various nationalities, stood in the background, on the fringes, and even in “the wings” during the 2-hour, no-break ballet/opera at 8pm. The Teatro Real pit orchestra, beautifully performed music by Verdi and Wagner throughout.

The first half hour consisted of the 10 dancers literally convulsing slowly yet violently across stage, all with some balled-up material in their mouths. One guy was totally nude except for a small hand-cloth he held tightly between his knock-knee legs, all the while hoisting it back up into position as he moved around. By the end of the half hour of convulsions and writhing around, they’d spit out the materials to the floor, taken off most their own clothes, and put on the underwear or skirt – “the mouth material” which they’d just spit out – and this seemed to calm them down a bit. (see image above) From time to time they’d contort their bodies odd positions and yell wildly. (see image below) It was by the end of this first half-hour that I’d noticed two people around me asleep and nearly snoring.

The star of the show was clearly the choir although the dancers were the center of attention. In the last hour or so the choir and dancers were involved together with choreographed movements.

The big finale came as they all, choir and dancers, ran (seemingly) randomly around the stage for 5 minutes until they found their positions. Then all action stopped but the singing continued. Then, in the final 10-15 minutes, one by one, they all turned very very slowly towards the rear of the stage and walked super-slowly in that direction, about a third of the group – choir and dancers alike – took off all their clothes, or most of it, and exited the stage as if they were suffering from a major structural deformity. And the curtain came down to finish the performance and that was that – UNTIL the curtain came up again to greet the performers, that is….. (read on) Okay, then! Hey, I’m all for the human form – particularly the female one, but I wasn’t prepared to see the average-choir-guy take it all off. Thankfully, they did so as they were walking away so it was full-rear nudity and not the other way around. Whew!

As the curtain was down and the theater was dark, the entire audience erupted! First I heard boot-heels hitting the wooden floors everywhere. That was totally weird at a Teatro Real performance where you’d expect everyone to be so cultured and proper. Then I heard several dozen people whistling like crazy! You’d have thought this was the finale to a rock-and-roll concert! A very well-dressed, 60+ year old woman with a stylish hair-do was howling through her rolled-up program as the curtain came up. There were performers at the front of the stage, thankfully fully dressed, all with big, bright smiles. A job well done – and done well.

My goodness! These people really loved this performance! I guess they knew something I didn’t. Sure, I’m not as cultured or knowledgeable as many on the topic of dance, opera and art, but I think I can appreciate the basic qualities of a good performance and, well, in my opinion – and apparently in the opinion of the two people I saw sleeping, it wasn’t THAT good! Many people were clapping, including me because others were. But you might have thought Bruce Springsteen had just finished up his last set or something! So why were these people so thrilled?! (answer below)

THEY WEREN’T! (did’ja see that coming?) Man, this was an education in and of itself. APPARENTLY, as I found out in the moments I was exiting the Teatro Real, these are the reactions of an audience which is UNHAPPY with the performance, the heel-to-floor knocking, the whistling and even the howling!

We stood up and the mature Spanish man in a full suit said, “In the first part, I was just about to leave.” As we exited the “palco”, a group of Spanish women were shaking their heads and one said, “That poor choir.” Another couple passed us on the stairs and the man said loudly, “What a nightmare!” Even my ballet partner described it as not only a waste of time, but a waste of money. There went 160 Euros for 2 hours of drivel.

Today I’ve been reading the comments of the articles written about – and in anticipation of – C(H)OEURS and the general reaction was just that, a waste of time and money. One guy (commenter “bravolitio”, 13 March at 11:s0pm), upon returning home from last night’s performance decided to share his opinions on the performance (I’ve translated it to English):

“I’ve just arrived from the Royal Theater.  To start, they sold me an ticket for a ballet, and this is not a ballet, it was a performance.  In the second place, without the music of Verdi, Mozart and Wagner, without the choir and the Royal Theater orchestra, where would those chickens [i.e. dancers] be?  […] One must be shameless to have the audacity to use these resources (music, choir, orchestra and theater) and to be presented in the setting with a hand in front and another hand behind (because of the nudity, I guess).  This has all been an enormous act of prostitution.  They should return my 90 Euros to me!“

Another guy (“luna142”, 13 March at 9:52pm) commented on a different pre-performance article upon returning home from last night’s show and said:

“Yesterday I saw the performance. Very boring with many moments that lost rhythm and was itself really slow.  The dancers were not coordinated.  The best part were the singers that had a bigger role than the dancers themselves.  The reason why people didn’t get up and leave was because you they would’ve missed the breasts and butts.“

See some of it for yourselves in the two YouTube videos below and tell me what you think in the comments section below. Ballet? Opera? Human art? Or none-of-the-above?