Passport Renewal at Madrid’s US Embassy 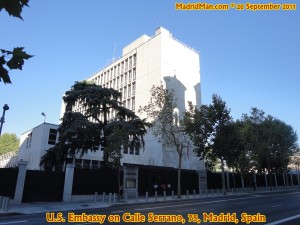 The other day I had the pleasure of renewing my nearly-expired US Passport at the US Embassy in Madrid on Calle Serrano, 75. And it REALLY was a pleasure! I was surprised how fast, easy, and efficient it was. I’m talking about the passport renewal application process, that is. Now let’s see if it reaches me in a timely fashion.

I first went to the US Embassy’s Website for Passports and Visas. There, you read information about your case in renewing your passport or applying for a new or lost passport. If you answer “yes” to all their questions, you can either download & mail your passport renewal application or you can download, fill-in, and take your application to the US Embassy. Since I was in the hurry, I chose the latter – but not without a bit of confusion. Figures, right?

Upon reading the instructions and then downloading the form DS-82, the form says US Citizens residing in Spain CANNOT use this application form and must first contact the US Embassy for information. Wonderful.

So I called and the busy receptionist picked-up after about 15-rings, but at least I got through at 9am on a Monday morning. They open at 8:30am and tried first then, but without luck. Upon explaining my situation to the Spanish-American receptionist (whom I’ll say was more Spanish than American), that I had Spanish residency and form DS-82 said I had to contact the embassy in order to apply for renewal, she suggested I download the SAME form, DS-82 and then request an appointment online. I told her there was no option for adult renewals on the online appointment page. She guffawed and said, “Oh, I know. That page is so silly. I don’t know why they do that. Anyway, just choose the appointment option for the renewal of a passport for someone under 18 years old.” She even told me I could have the passport photos taken right there at the US Embassy. Cool!

So that’s what I did, I chose the appointment opportunity for the next morning, Tuesday, at 9:30am, and had to print-off and take with me the US Embassy appointment verification document which lists your name, your birth date, phone number, email address, and an appointment ID & passport. I’m all set! Off to the US Embassy, I go, and surprised I wouldn’t have to wait a week or more to see someone!

Filling out the form DS-82 was easy and fast, only 2 pages, not asking any confusing questions, just name, social security number, birthday, address, and a couple more things. I was surprised, however, they asked about “Profession”.

Madrid’s public transportation system (bus+metro) was running particularly smoothly on Tuesday morning. What I calculated to take 45-minutes only took about 30, catching the bus and the metro trains (changing twice) upon arriving at the stops/stations. I love it when that happens! The nearest Madrid metro station to the US Embassy is Rubén Darío, Line 5, on the opposite side/just-west of the Paseo de la Castellana. The US Embassy is on Calle Serrano, 75, one-block east of the Castellana and nearly two-blocks north on the Calle Serrano and in the Barrio de Salamanca – one of Madrid’s poshest, richest neighborhoods. Of course!

Upon arriving at the high-security facility which is the US Embassy in Madrid, Spain, your first point of contact is not with a U.S. Marine or U.S. military person, but a Spanish security guard which asks to see your appointment printout. Verifying that, he sends you inside where another Spanish security guard asks you to empty your pockets and put your bag on the X-Ray conveyor belt and then you, yourself, pass through the X-Ray machine. They keep your bags (and your cellphone as they aren’t allowed inside) and give you a yellow, plastic number to retrieve your bag(s) on your way out. BE SURE YOU TAKE YOUR PASSPORT, DOCUMENTATION, APPLICATIONS, AND WALLET/MONEY WITH YOU INSIDE. Don’t leave your wallet in your bag like I did and have to rush back out to retrieve it. Keep in mind that these two security check point security guards were Spaniards and they don’t speak but a few words in English.

Once past the security checkpoints, you walk up a few stairs and through a door to your first American encounter, the person who checks your appointment and passport and gives you your number-to-be-attended as (s)he sits behind a no-doubt bullet-proof glass barrier. He was pretty nice, young, and buzzed me through the door to the left.

Just inside the door is the general waiting room, much like a Spanish governmental administration building where you have rows of seats and several windows where you are attended. A large LED panel in the center of the room displays the next number to be attended and at which numbered window. There was also a television showing the news with its volume almost too low to hear. Now I don’t recall if the TV station was in English.

There were probably 35 people in the waiting room and I suspected I’d be there for hours even though I had an appointment. Luckily, this wasn’t the case. My number was coming up within two digits so it shouldn’t take long. “BING!” There goes another number and mine would be next. It was at that moment that I noticed someone coming out of the automated photo book in the corner. That’s right! I need photos! But I assumed I would be hand-held by my attendant to take them. That was apparently a mis-conception on my part. So I walked over to examine the photo booth, someone was inside, and saw it took “4 Passport Size Photos for 5 Euros”. There was luckily also a change machine next to the booth. Next, it was my turn for photos and I took my seat in the cabin, looking into the glass panel, had 3 opportunities for photos and then could choose my favorite – that is to say, the one which looked the least horrible at 9am in the morning (baggy, sleepy eyes. Yeah, THIS is how you want to be remembered for the next 10 years!). Boom! Done! I got out while the photos were printing and, “BING!”, my number was up.

Grabbing my folder full of applications, passport, and appointment number, I dashed over to the window where I was face-to-face with, I’m sure, the same woman whom answered the phone when I called for information. She had a little button on her shirt with the Spanish and American flags, but, from her accent, I was sure she was more Spanish than American, probably born in Spain. And here I thought everyone in the US Embassy were US-born/bred employees. Guess not. Maybe only on the back-end people, those which deal with policies and the nitty-gritty of Embassy work. The front-end people, those which deal with the public, surely needed to be perfectly bilingual. There were other “Americans” in the waiting room, but also a lot of international people, too.

As the woman was checking my application I ran back to get my freshly-printed photos, she took them and cut-out one of the four, stapled it to my  application, and gave the rest back to me. Everything was in order. Whew! I told her I would need the Expedited Service as described on the US Embassy website and was prepared to pay more. She said there was no expedited service available and that it should only take 3-weeks. Okay. That’s good. That’s about the amount of time I was hoping to wait had there been expedited service. The woman then explained that the new passport would be delivered to me by messenger service. That is to say, someone would come to my door to deliver my new passport and require my signature to receive it. Hmm.. So what if I’m not home?!

All done within about 12-minutes. She smiled and told me I could then pay my $110/83€ at the cash counter nearby so I thanked her for her time and walked away. There was no one at the cash counter behind glass so I waited and studied the different personal items the cashier had scattered around the desk, bottled water, a tiny stuffed animal, photos of children, the usual desk ornamentation. So there I waited. After about 10-minutes I went back to the woman which assisted me and waved that there was no one at the cash-counter, she apologized and said she probably just stepped out. Okay. Everyone deserves a break. I get that. No problem. 5-more minutes passed and she finally appeared, apologetic, and processed my credit card payment. I thanked her and said goodbye.

On the way out you have to pass through a football-stadium-style turnstile which goes from ceiling to floor. On the other side of that the original Spanish security guard asks for the yellow, plastic number and he retrieves your bag for you, sending you on your merry way.

All told, the entire process was painless apart from the first few anxious moments when reading the US Embassy website, stating that I’d have to “Contact the Embassy if you reside outside of the USA”. But once I called and got the appropriate information, the making of the appointment, the filling out of the application, and the submittal of the application at the US Embassy was a breeze. Now let’s see if it arrives within 3-weeks!

UPDATE: My passport was delivered by messenger exactly 2-weeks after submitting the application. I had to pay the messenger 10 Euros (something they don’t tell you when you apply), but I didn’t mind. They even called the night before to see if I’d be home the next morning and then again 30 minutes before arriving. Woo Hoo!

12 Responses to Passport Renewal at Madrid’s US Embassy