Last Friday, El Día de la Almudena, we had 1:30pm reservations for Madrid’s Taberna La Bola to eat Cocido Madrileño – their signature dish. The ‘long-form-term’ of this dish is “Cocido a la Madrileña“, if interested.

Background: El Día de la Almudena is Madrid’s female patron saint day and is a city-wide holiday. Banks, schools, and most businesses are closed on this day which begins at roughly 10am with a mass in Madrid’s Plaza Mayor. That lasts until about noon and then begins the procession, carrying the patron from the Plaza Mayor, down Calle Arenal, through Plaza Santa Isabel II, and to the Almudena Cathedral. Leading the saint are a number of groups in religious and or period dress and often representing different churches and church groups. 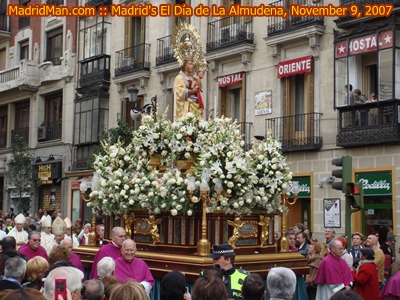 We arrived by taxi as close to the city center as we could – right next to La Catedral de la Almudena – because all the streets were closed. We paid, got out, and walked briskly to OPERA where we were meeting more people. Our timing was great because we arrived there JUST as the procession was passing through this plaza, formerly known as the Plaza de Isabel II but many people simple call it Plaza de Opera.

We arrived at 1pm exactly, stepped up to about 4th in line behind the crowds, and took a number of photos while waiting to leave to be ontime for our reservation at nearby La Bola. What an entertaining yet solemn procession it was. 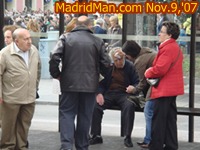 It
was reaching 1:30pm and turned to leave when an 80-year old man fell
off the curb behind us, cracking his head, and starting to bleed
profusely – as head wounds often do. We helped him to his feet, put a
number of handkerchiefs to his wound, and helped him to the bench at
the bus stop. I was impressed that about 6 other witnesses joined in to
help too. While applying pressure and loosening his tie someone called
the police and an officer arrived in about 1 minute. He checked out
the man and called for the medical team – which also amazingly arrived
in about 4 minutes and attended to the well-dressed gentleman who was
starting to feel a little less dizzy, although the medical guys put him
on his back on the bench. Since he was now in good hands, we left
somewhat stunned by the experience to get to the restaurant just a
little late. 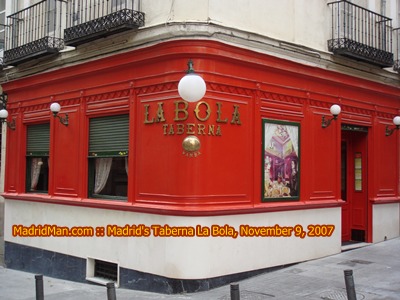 Arriving at Taberna La Bola we gave our name, they checked their reservations list, and took us to THE BACK ROOM of the restaurant. Disappointed, I was. This was my SECOND visit to La Bola and the first time we dined in the very nice, rustic, old dining room. But this time it was THE BACK ROOM for us. It too was nice enough but not nearly as rustic and spacious as the main dining room. Hmph. Fine.

We order that which you HAVE to order here – el Cocido Madrileño – the dish for which La Bola is famous. Along with that we ordered a bottle red wine, a Rioja.

First came the fine noodles in a dish. Then they pour the cocido broth over top of that. We eat the noodle soup, dipping our bread into it (NOT something you would usually do at a nice restaurant – which this is), and chatting away.

After finishing the soup and the waiters removed our dishes, came the garbanzo beans (a.k.a. Chick Peas), chorizo, potato, pork, chicken, and a healthy slice of pork fat – which I never eat and made no exception this time around. There’s something really disgusting to me about sinking your teeth into pure, translucent, 100% fat which makes my skin crawl. They offered the standard cabbage but I passed on that. Not a cabbage fan.

The price per person for the cocido was about 18 Euros. All totaled, with the bread, wine, 2 bottles of water, and dessert, the price was 112.90€ for four persons. Oh, and by the way, an important detail – THEY DON’T ACCEPT CREDIT CARDS. This is odd for such a mid-range restaurant. You really have to make reservations for this popular place too. Possibly we got the table we did in the back room because I made the reservations only the day before – in the evening.

After lunch we were all full and in search of coffee to liven us up a bit so we walked to Plaza de Oriente and Los Jardines de Oriente (the gardens between the Opera House and the Royal Palace) and chose a table on the terraza of the Café de Oriente. It was a bit cool but they’d put a number of those tall, propane heater pole in the middle of each 4-table cluster so we were warm enough. There, we had our coffee and those who smoked smoked with the view of the gardens, Madrid’s Palacio Real, and the Opera House. How nice. There, we chatted for another hour or so and enjoyed ourselves – but probably not as much as the large group of English girls sitting at the table next to ours, drinking, eating sandwiches and pizzas, and giggling loudly. It was apparent to me they were in Madrid for a “Hen Party” – which is a kind of bachelorette party getaway. I only assume this from their numbers – and the fact that one of the English women sported a purple sequined hat with small-yet-numerous purple phallic symbols hanging from its brim. Nothing but class.

After the much-needed eye-opening cup of coffee we went to a movie at one of the many Version Original cinemas near the Plaza de España. We went to see the Viggo Mortensen movie Eastern Promises – complete with Spanish subtitles. A good enough movie. 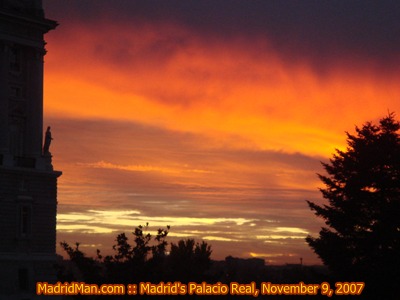 After the movie we walked back past the Palacio Real and stopped to marvel at the spectacular sunset. Hundreds of people must have been doing the same. Many were taking photos.

We walked on after awhile to the Almudena Cathedral. Being just after
sunset, the cathedral was nicely illuminated with thousands of people
waiting in long lines to enter La Catedral de la Almudena – today being
her Saint’s Day.

Today was my very first Fiesta de la Almudena in Madrid and I felt
fortunate to witness part of it. Earlier in the day I watched much of
the Mass on TeleMadrid which took place in the Plaza Mayor. That is to
say, I had the Mass on TV behind my head while working on the computer
but I enjoyed watching and listening to the interviews and street
scenes before and after the mass.

It was a pleasant play with people I care about; good food, good conversation, a religious procession, a good movie, good scenery, a bloody injury, and bloody bachelorettes. What more could you ask for on a holiday?