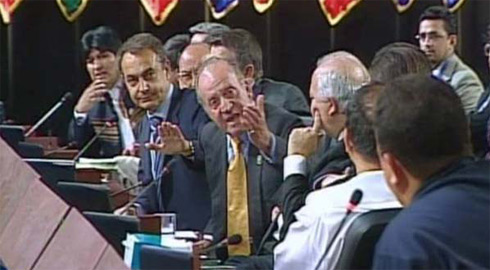 ….is what esteemed King Juan Carlos of Spain said to Hugo Chavez, President and dictator wannabe of Venezuela.

The phrase is now a sound-bite, a catch-phrase tossed around in Spain in as much as Bart Simpson saying, “Eat my shorts!” in the United States. And while catch-phrases have a limited shelf-life they always stay in our minds, pulled out of the catch-phrase-drawer whenever pertinent.

King Juan Carlos got his start in Spain as appointed by another dictator – a Spanish one – General Francisco Franco. Franco thought his “image of Spain” would carry on through the new King Juan Carlos – and maybe the new king even believed it himself at the beginning. But the fact is that after Franco died, the King turned Spain around 180º and took his country from a poor, fascist-ruled Spain to a constitutional monarchy, and then to a democracy. For this, the vast majority of Spaniards love him for his help – even if many don’t love him for his position.

The “¿Por qué no tel callas?” remark came from a visibly angered King of Spain to Venezuela’s Hugo Chávez last week on the last day of the Ibero-American Summit in Santiago, Chile, a.k.a the “XVII Cumbre Iberoamericana – Chile 2007″.

Attendees included heads of State from Spain, Portugal, and the former American colonies of Spain including Venezuela, Bolivia, and and all the rest.

I listened to and watched 3 minutes of video of the summit and the exchanges which took place. Watch the video below – it includes English subtitles.

In short, all heads of state had their allotted time to make statements at the summit. Hugo Chavez spoke for 26 minutes, outlasting his 5 minute time allotment. How does this happen? Chile’s president, Michelle Bachelet, was conducting the forum – and not doing a very good job as you’ll see in the above video. She barely interjected once or twice requesting everyone to respect each persons time to talk.

Next, Spain’s socialist party President José Luis Rodriguez Zapatero had his alloted time –  but he hardly touched his prepared speech because Hugo Chávez continuously interrupted him, asking questions and making statements like former Spanish President José María Aznar is a fascist and that “fascists are not human. A snake is more human.”

Throughout the interruptions Zapatero attempted to continue with his speech and reply to comments made by Chavez but without success, repeatedly demanding respect from Chavez for his time to speak.

And then it happened….  El Rey Juan Carlos, the King of Spain leans in and says those 5 words which are plastered everywhere across the media including print and internet, “¿Por qué no te callas?” as a grandfather might say to a disruptive child at the family dinner table.

First, let me state for the record that I am not a Hugo Chavez supporter nor do I agree with the direction he hopes to take his country.

I’ve watched the video above several times and I find fault with three persons:

1) Hugo Chavez is loud, outspoken, not skilled in the ways of diplomacy, and a bit of a sensationalist. He was speaking out of turn, making accusations and insulting the previous conservative Spanish President José María Aznar, calling him a fascist.

2) King Juan Carlos loses his cool, lowers himself to the level of Hugo Chavez, breaks diplomatic norms and disrespectfully tells another head of state to shut up – something one should never ever do no matter the circumstances, no matter the head of state, no matter what.

3) Chilean President Michelle Bachelet, supposedly in charge of the summit, allowed Chavez to continue with his interruptions, rarely saying a word, lost control of the summit, and did nothing to keep people to their allotted times.

The man on the street and many talk show hosts are applauding the King of Spain for his reaction but I cannot support this. These are diplomats. Diplomacy is necessary. A cool head is necessary. RESPECT is paramount in these summits and within politics.

Shortly after the king’s “expression“, Spanish President José Luis Rodriguez Zapatero took over and gave a short, eloquent, and forceful speech – without hardly raising his voice – DEMANDING RESPECT from and for all heads of state at the summit and demanding panel control by Chilean President Michelle Bachelet. Watch the video and listen to the applause for Zapatero at the end.

What impressed me most was Zapatero DEFENDING the former prime minister of Spain, pointing out to Chávez that Aznar was chosen by the Spanish people. And while, he said, he doesn’t agree with many of the former prime minister’s principles, he stilled deserved respect as a former head of State. Would the likely future conservative party President of Spain, Mariano Rajoy, do the same in defending Zapatero if Rajoy was in the same position with Hugo Chavez? I’m not so sure.

Hugo Chávez fouled. But then the king followed up with a foul of his own – albeit defending Zapatero’s time to talk and, in a way, also defending his own country of Spain. This discourse was going nowhere fast and possibly to get worse until Zapatero stepped in and took control, seeing no control was offered by the Chilean president.

As I said earlier in the blog entry, The King is being applauded by the-man-on-the-street as well as many talk show hosts. But many others are not so happy with the King’s out-of-control interjection. Two wrongs do not make a right – ESPECIALLY in politics.